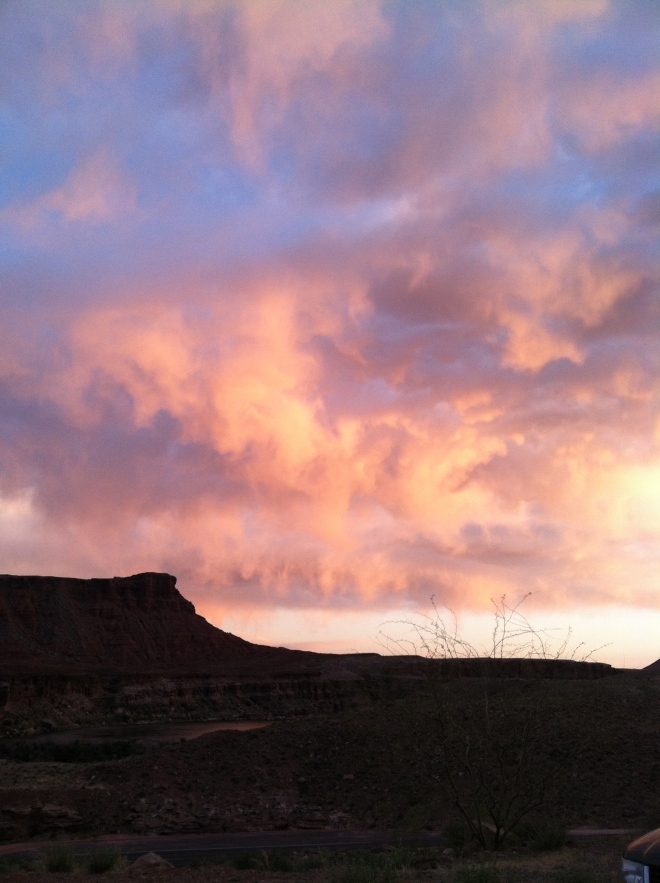 Sunset on the Vermillion Cliffs.

Breaking news, finally a California Condor sighting!  We actually saw nine of them.  And the trusty iphone was able to get some great shots.

There are only 230 California Condors in the wild, 182 in captivity, for a total of only 412. All of them were tagged with a number and some had transmitters.

When we first arrived at the Navajo Bridge Interpretive Center on the morning of April 13th I spotted one sitting on the steel arch of the bridge. Then we saw another and another. It was still early in the morning. The thermals hadn’t yet started, so the condors were all sitting. We slowly walked the length of the bridge. R was hocking loogies over the 500 ft high bridge and getting a kick out of the swifts going for his spit. By the time we walked back to the beginning, just like magic, one at a time they began soaring. What a thrill and what an amazing show. These birds are huge. A Turkey Vulture is 27” in length with a wingspan of 70”. The California condor is 48” x 110”. The mature birds have a red head, the immature a black head. They consider these birds wild, but in fact they are being fed. The US Fish & Wildlife Service has a contract with a dairy in Phoenix for dead calves. They freeze the calves then use as needed, basically they lay the dead calf out like road kill. The condors will gorge themselves to the point where they are slow to take off in flight. This often times makes them easy prey for coyotes. 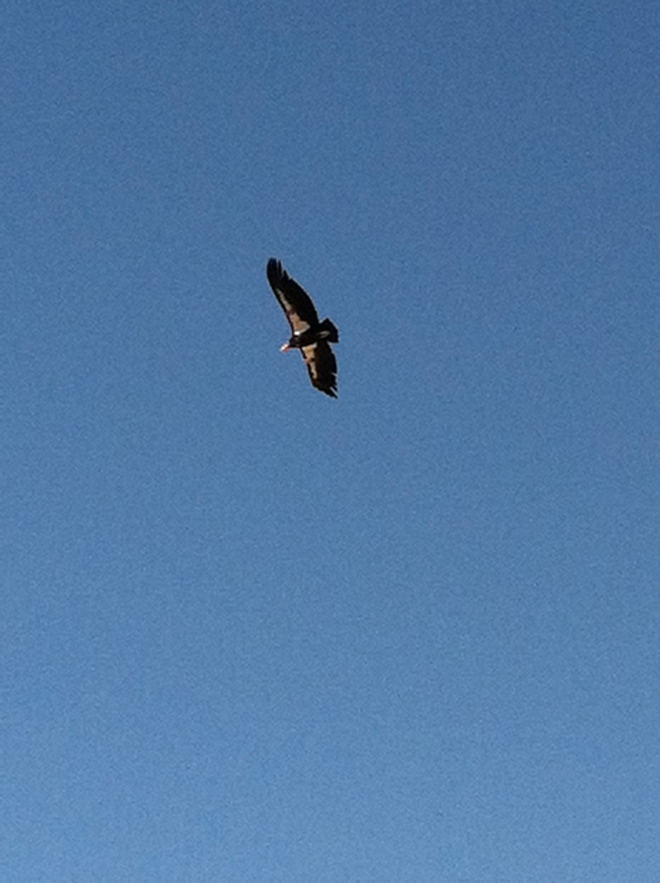 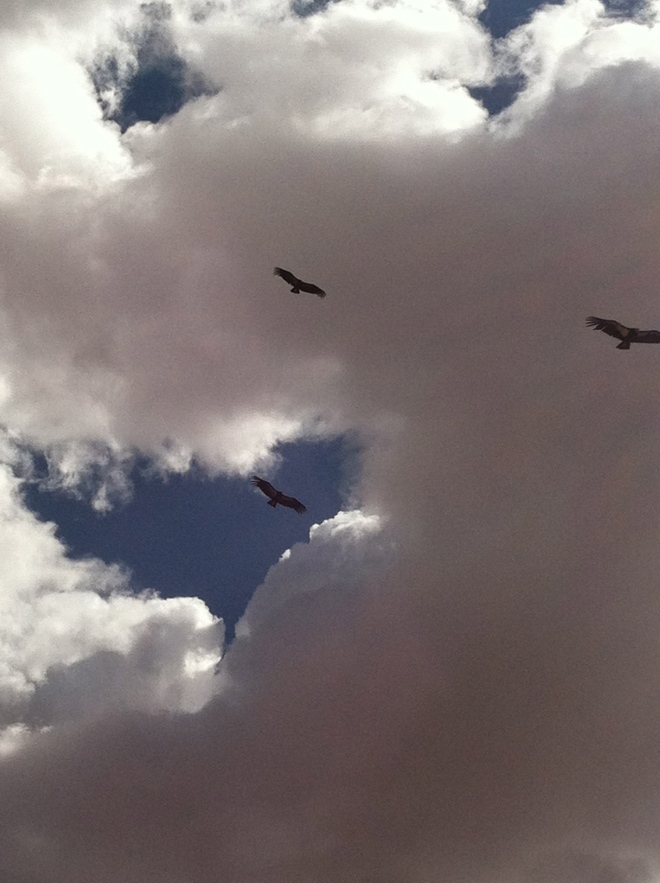 Now back to your regularly scheduled program…Lee’s Ferry Campground in the Glen Canyon National Recreation Area. It was our first visit to a campground this year. It felt a little strange after all the boon docking we’ve done. It was a nice campground, but a campground nonetheless. One of the things about a campground is everyone watches everyone else, us included. There was a real nice lady, Kathy, with a yellow lab in a Winnebago trailer that gave us the hot tip of filling Sara’s kong with food and then freezing it. It keeps Sara occupied much longer to help with her separation anxiety. Sara has really gotten use to being alone in the Airstream. We now feel comfortable leaving her for up to 6 hours. There was another old man whose hobby appeared to be picking up trash, and not just in the campground, but also in the hills and gullies around the campground. All said, just the entertainment alone of watching everyone was worth the $12 a night. It gets crazy windy through the canyons of the Colorado River. Apparently, unbeknownst to us, April is the windiest month; at least that’s what we heard several people say. It was just two short nights at Lee’s Ferry, but as usual we packed in a lot of activities. We walked up the Paria River, hiked down the Cathedral Wash, saw all the California Condors at the Navajo Bridge, drove into the town of Marble Canyon, and went down to the river numerous times.

Our site at Lee’s Ferry.

We had some crazy threatening weather, but it never rained.

My girls crossing the Paria River. 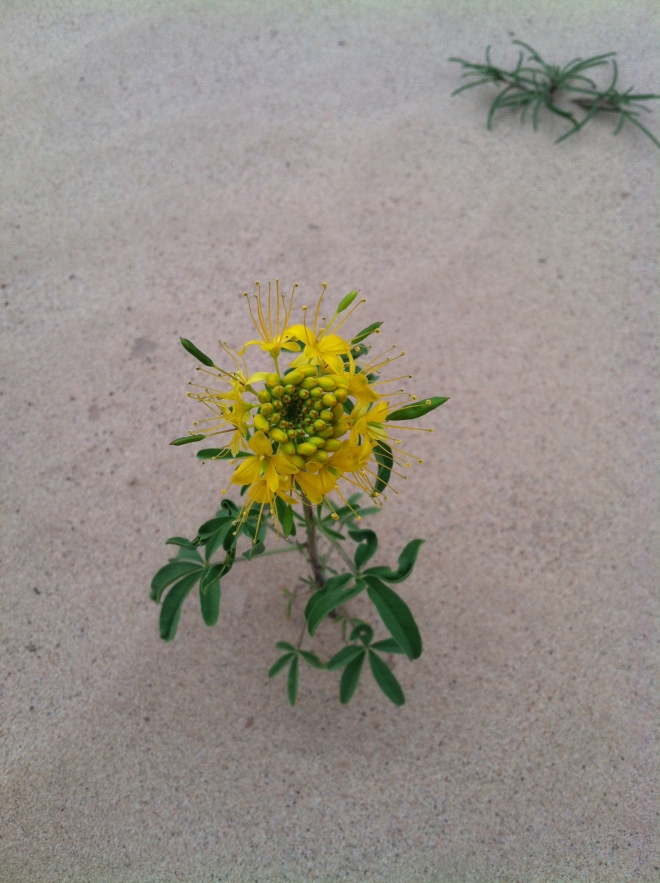 We looked through three resources and could not identify this flower. Does anyone know it? 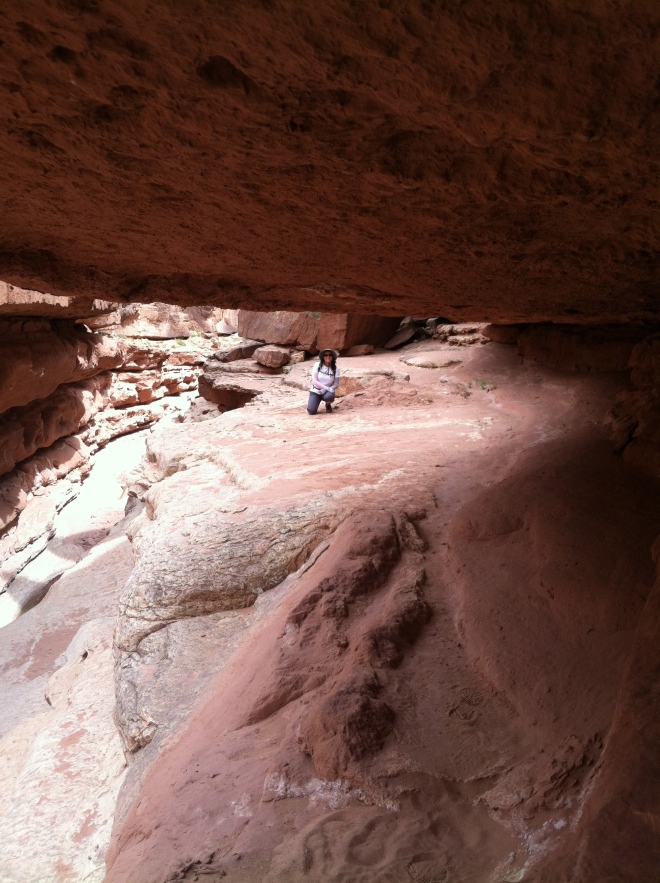 R along the banks of the Colorado River. 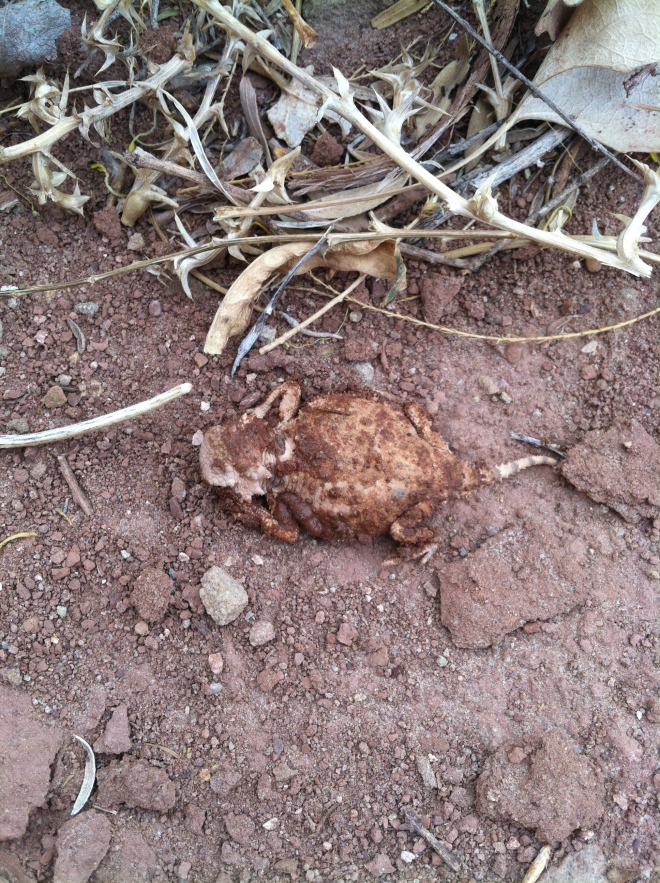 Dramatic view of the Vermilion Cliffs.