My girls don’t like the heat. It doesn’t bother me as much, though I’ll be the first to admit I can no longer ride in the the bed of a mini pick up truck to Lake Havasu, during the summer, like in my youth. When we pulled into the Virgin River Gorge at high noon it was already 95 degrees and a little breezy. By 4pm it was 100 degrees with furnace blasts of 25 mph. When I don’t like hot weather is while I’m trying to sleep.  The solar panel kicks ass, but it will not power the air conditioner.  One night of struggling to sleep was enough. Too bad, because it’s a beautiful BLM Campground and virtually empty (duh).  The original plan of staying here three nights was quickly scrapped. It was time to get ourselves to Hurricane and an RV Park with full hook ups so we can crank the air conditioning.

Check out the very bottom of the sign. That makes me nervous. 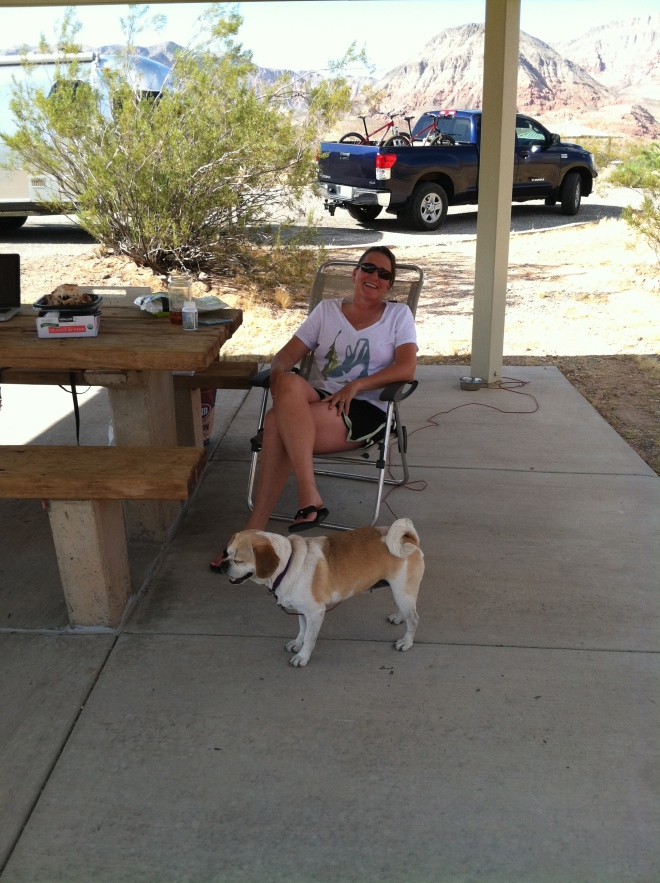 My girls trying to beat the heat. Yes, that’s a Costco chicken on the table! I drove into St George so I could get cell reception to return work emails and phone calls, and of course visit Costco. It was way too hot to cook.

She’s not a fan of hot weather.

Once the sun went behind the mountains we took the short walk down to the Virgin River. 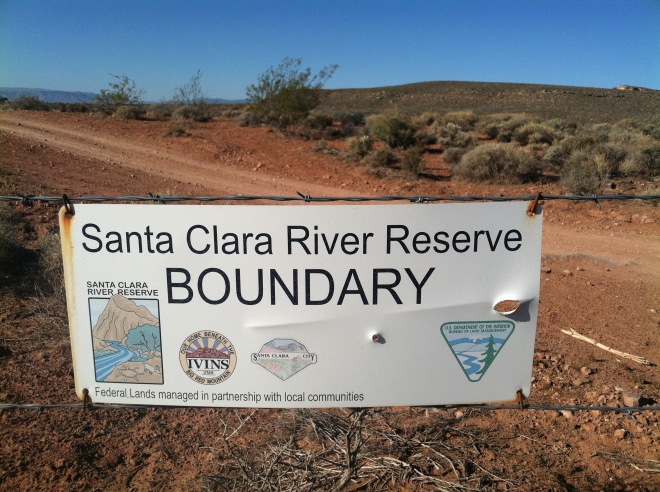 Originally we were going to do three rides in the St George area, at least we got one in, the Santa Clara River Reserve. Great single track single speed riding!. 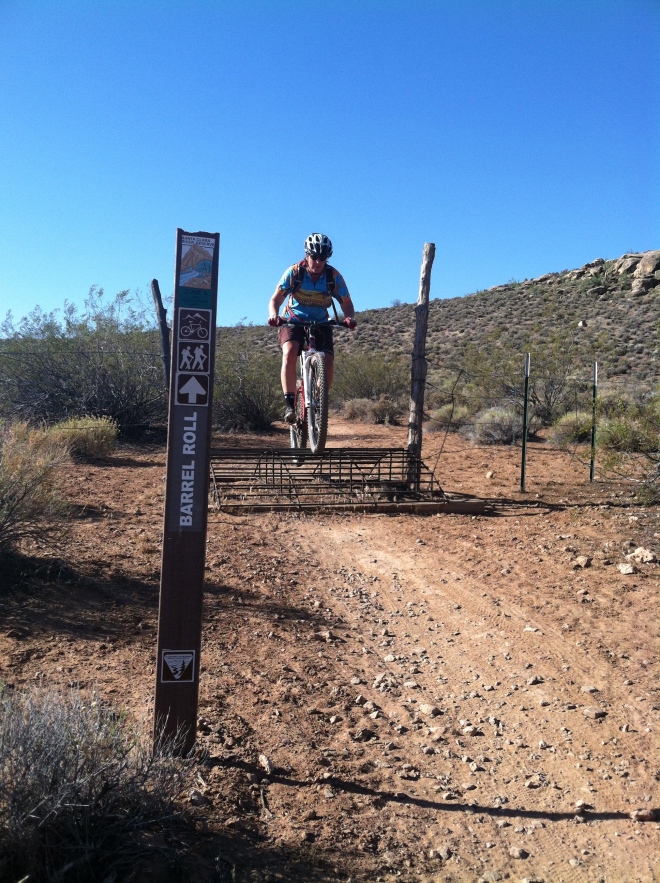 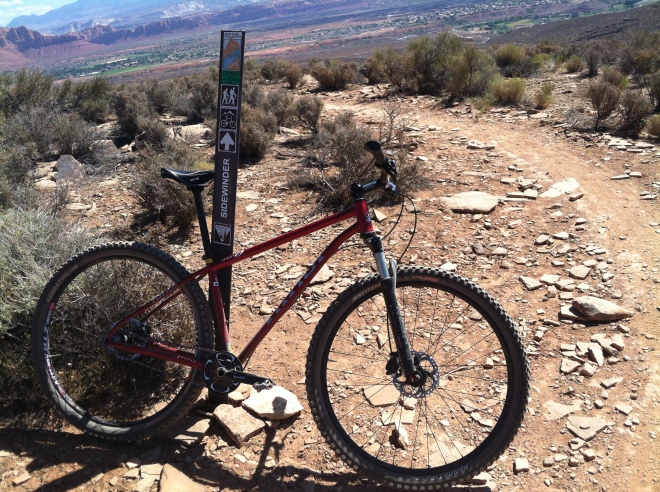 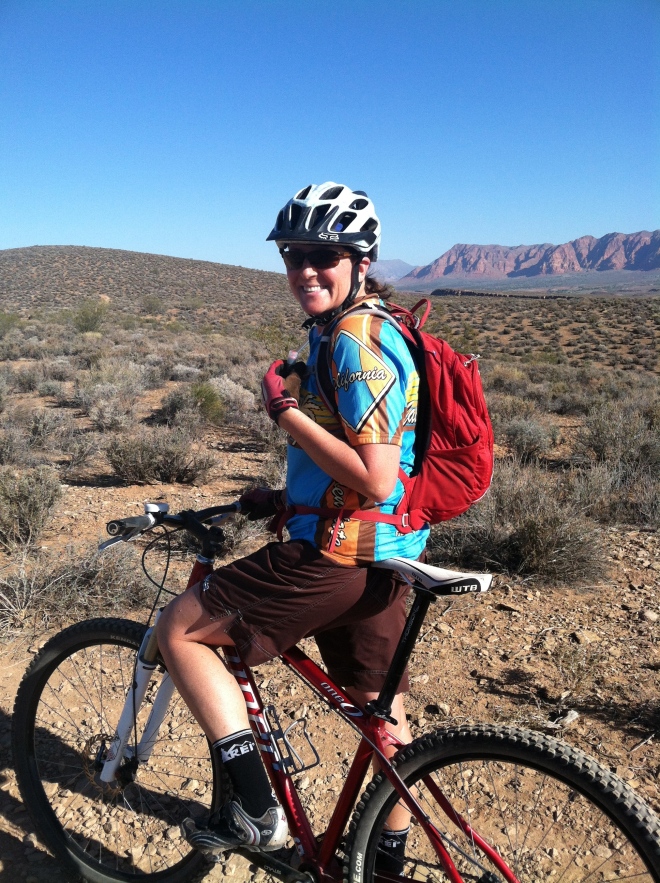 Damn, it was great to get a ride in.

We are embarking on our Summer 2014 Mountain Biking & Beer Drinking Tour. Amargosa Valley is kind of a backdoor entrance to Death Valley. A poor man’s Beatty. The only thing we are doing here is having a few beers, eating dinner in the Airstream, sleeping, getting up, and getting out of here.

The focus of the trip is Durango, Colorado, but there will be many stops before and after. At 5pm this evening it was 97 degrees and very windy. Originally we were going to boon dock, but quickly decided a full hook up site would be much smarter, so we could run our air conditioning. So here we are at Amargosa Valley RV Park. 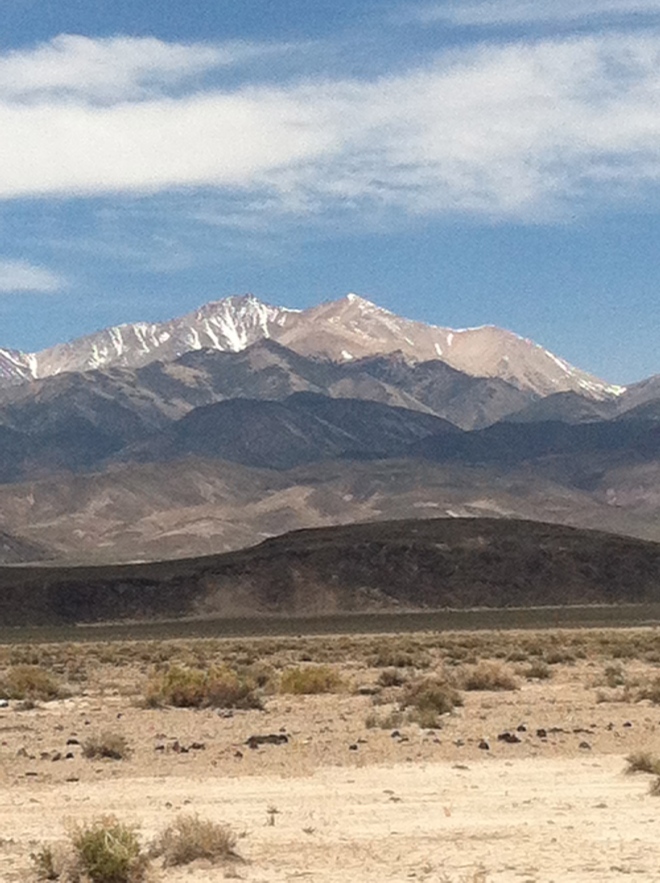 Nice drive today. This is the back side of Boundary, the highest peak in Nevada. That’s Boundary on the right and Montgomery on the left, which is actually in California. 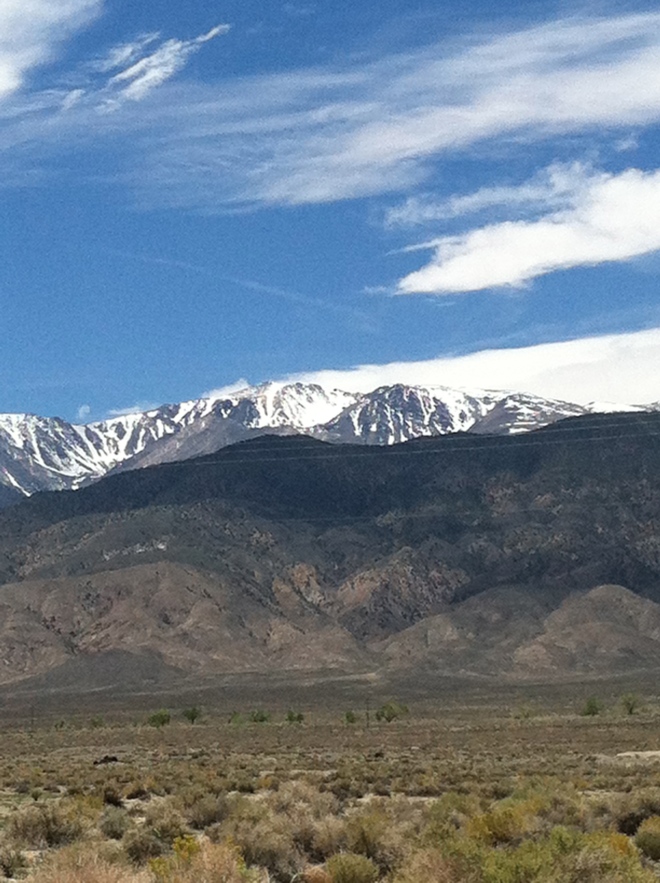 Back side of the White Mountains. 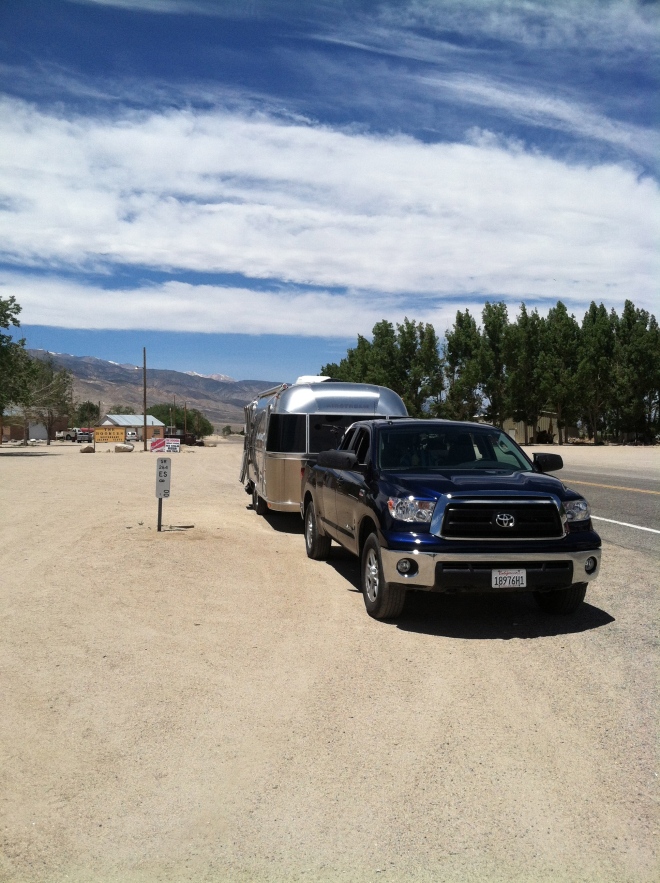 Dyer, Nevada. This is were we pulled over for lunch. Delicious left overs, enchilada pie.

The road goes on forever (without a shoulder) and the party never ends.

Once upon a time this place must’ve been something.

It may not be glamorous, but what a swinging deal.

What? Where’s the office? It was invisible. 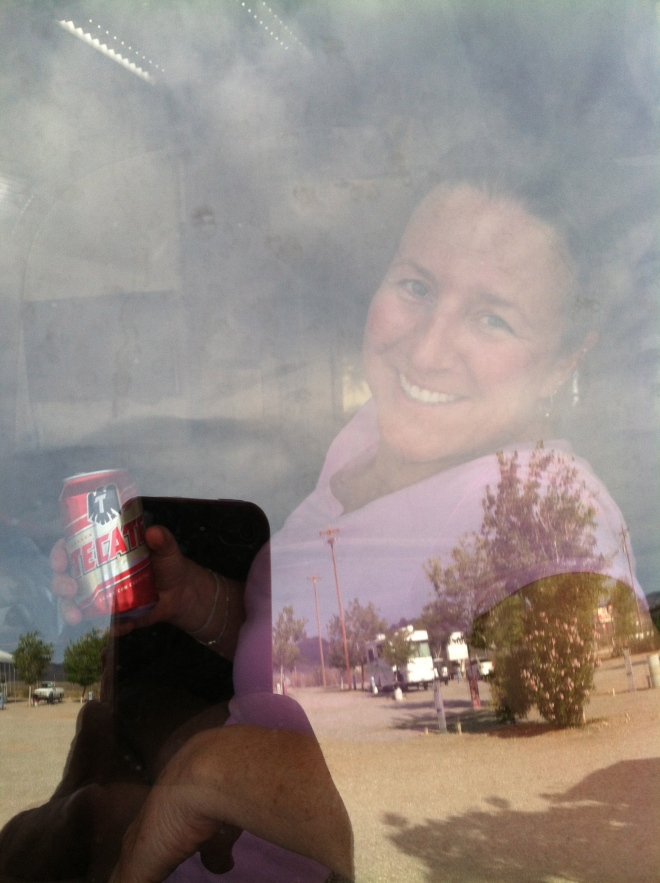 The Euros must go apeshit over this place. What’s more American then the Bunny Ranch Brothel, Hot Sauce, Souvenirs, and Aliens? 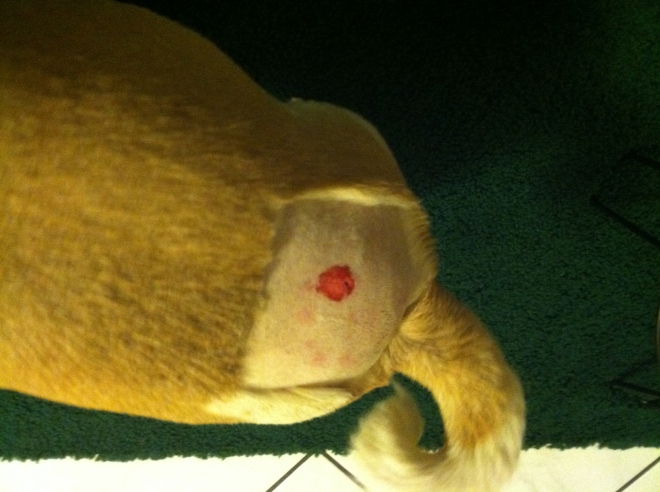 Poor Sara. Last week she got bit by an off leash dog. The kicker is it was right in front of Mammoth Pets, and the owner’s dog!

Hurricane will never be confused with Sedona. Everything Sedona is, Hurricane isn’t. Both cities are great but uniquely different. There are no Pink Jeeps in Hurricane.  It’s basically a Mormon town, with a lot of the Fundamentalist LDS, that serves as a gateway to Zion and Bryce National Parks. So most tourists typically stay one night. A lot of those tourists are Euros. All the hotels and motels are run by folks from either India or Pakistan. The only ones treating Hurricane as a destination are mountain bikers. Every year this place is getting more popular and for a very good reason, the mountain biking is awesome and unique. It’s quite a scene to be walking through the grocery store and see the Fundalmentalists ladies with their long dresses and hairdos, lost Euros, and scruffy mountain bikers, all pushing carts up and down the aisles. It’s an interesting vibe.

We’ve been coming here for at least five consecutive years if not six. I can’t imagine not coming yearly.  Here’s the picture book story of this years visit.

Yup, that’s us camping in the Walmart parking lot on Easter Sunday. As I like to say “an Easter to remember”. It wouldn’t serve any purpose trying to explain how we ended up at Walmart, just know that we did. 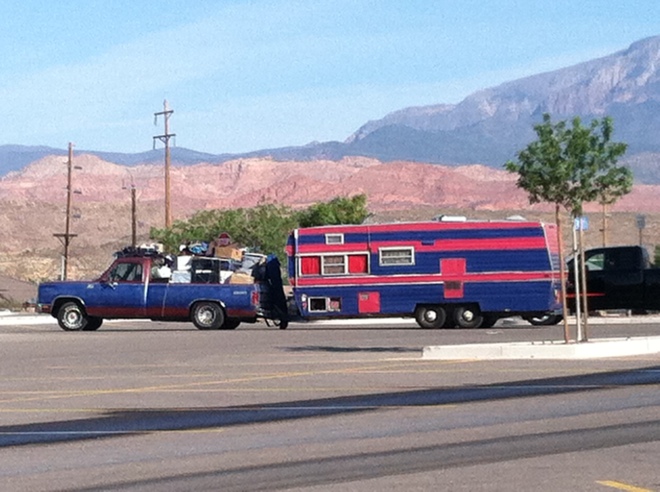 This pic is from Monday, but this not so swell guy pulled in Easter Sunday night, as we were just falling asleep. It sounded like he was trying to rebuild his engine and spilling all the aluminum cans and bottles he’d been scrounging. We wake up the next morning and he was on the other side of the lot. I’ll give him bonus points for trying to have a matching paint job on the truck and trailer.

On Monday we moved to this beautiful site at Sand Hollow State Park. We chose the primitive area. Only two other campers!

On Tuesday, Sand Hollow turned to Sand Hell. I guess there’s a reason the area is called Hurricane.

We were the only ones here, imagine that. I guess the other people were smart enough to not stay during a sand storm. We had sand in every crease and orifice of the Airstream and our bodies. 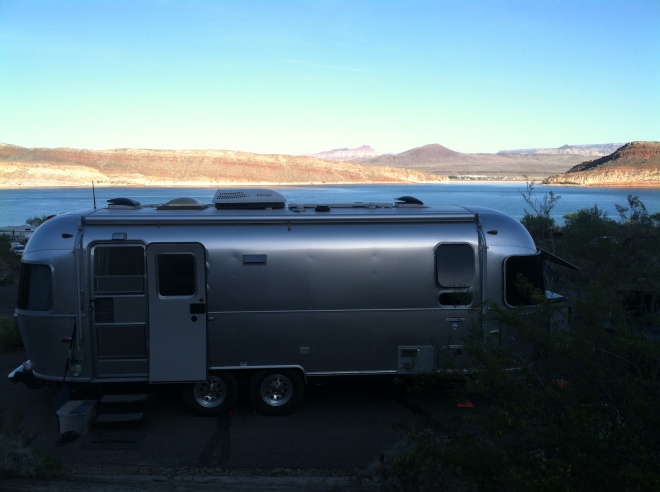 Wednesday, over to Quail Creek State Park. That’s Gooseberry Mesa in the background. Five nights at this wonderful place. We only experienced one knucklehead who had his generator running past 11pm. Amelia actually confronted the guy. We did have strong wind, but without the sand.

Mike and Chris joined us again this year. This is a pic from the Prospector Trail/ Church Rocks area. It’s the traditional first ride the day everyone arrives.

Absolutely love this place! We affectionately call it The Goose. 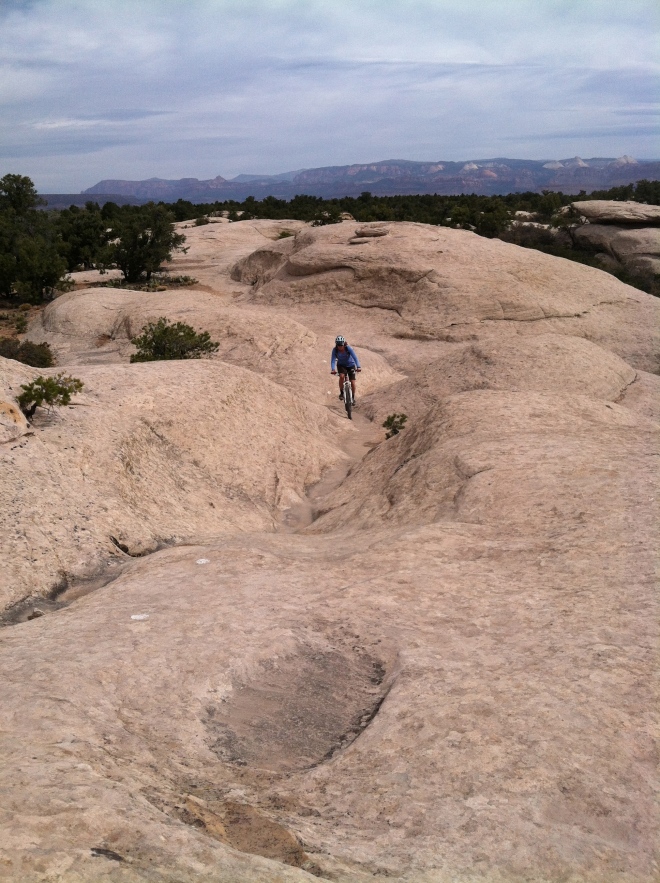 For those of you that haven’t been, this shot gives you an excellent idea of the terrain. That’s my wife following the dots!

Amelia and myself at the Point on The Goose. 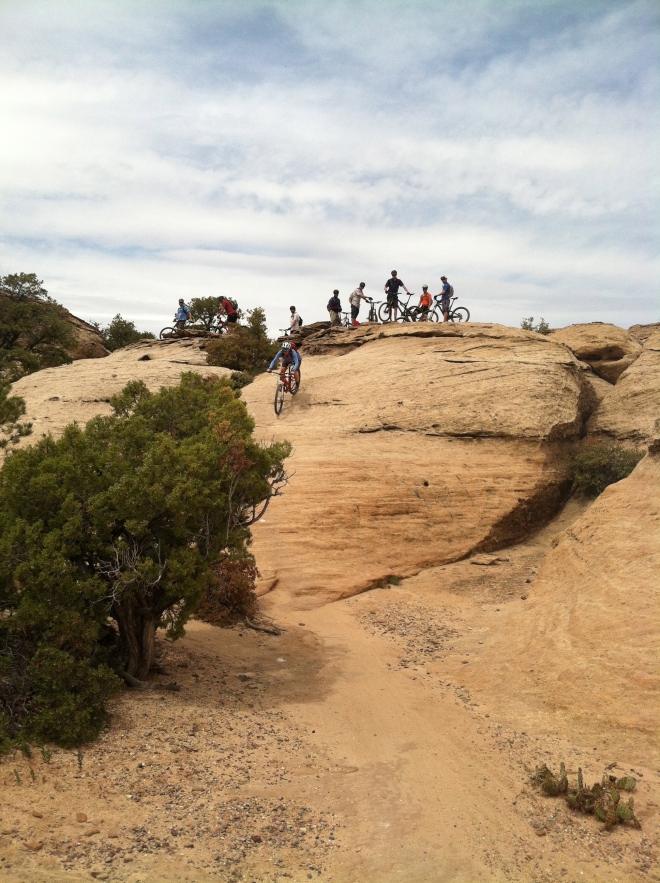 Amelia going down a steep rock with eight guys watching in amazement.

Sara has a new boyfriend! She sure liked Mike. We had three post ride dinners at our place and one in town. There’s this guy that cooks a great wood fired pizza. He’s open Thursday – Saturday. It’s literally a wood fired pizza oven on wheels on the side of the road. If I was on my game that evening I would’ve taken a pic. We took the pizza back to Mike and Chris’ hotel room at the Rodeway Inn and they cracked open a stellar bottle of wine. 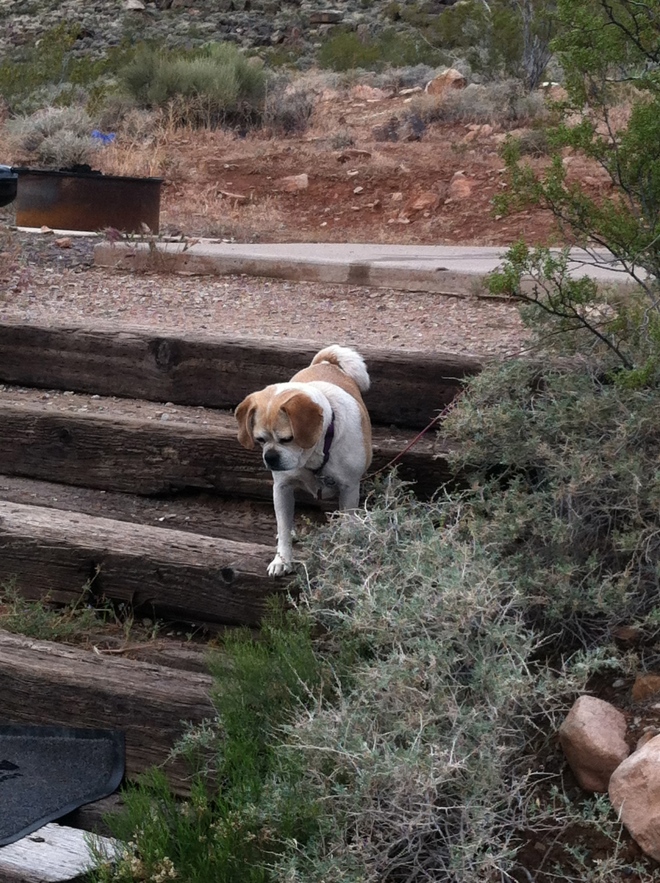 Unfortunately it rained on Saturday, so we lost a ride day. This is Sunday at Little Creek Mesa. A very large and remote area. No dots here, just cairns, and minimal signage. A few years back a couple of people got lost out here and died. Every time we’ve done it we’ve been with Mike, a retired USMC Lt. Col. helicopter pilot. He’s great at reading a map and tracking GPS. 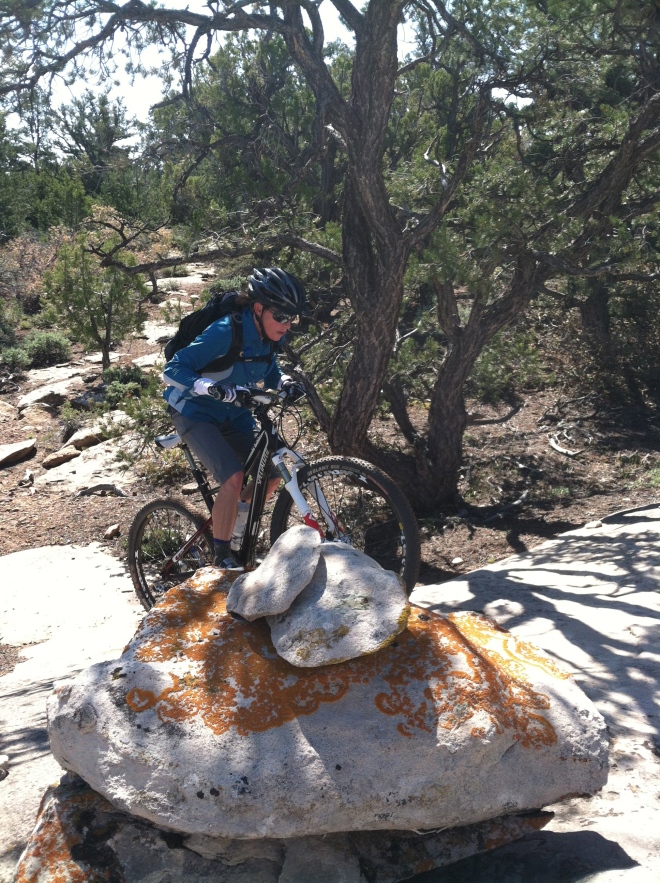 Chrissy clearing a short steep up. 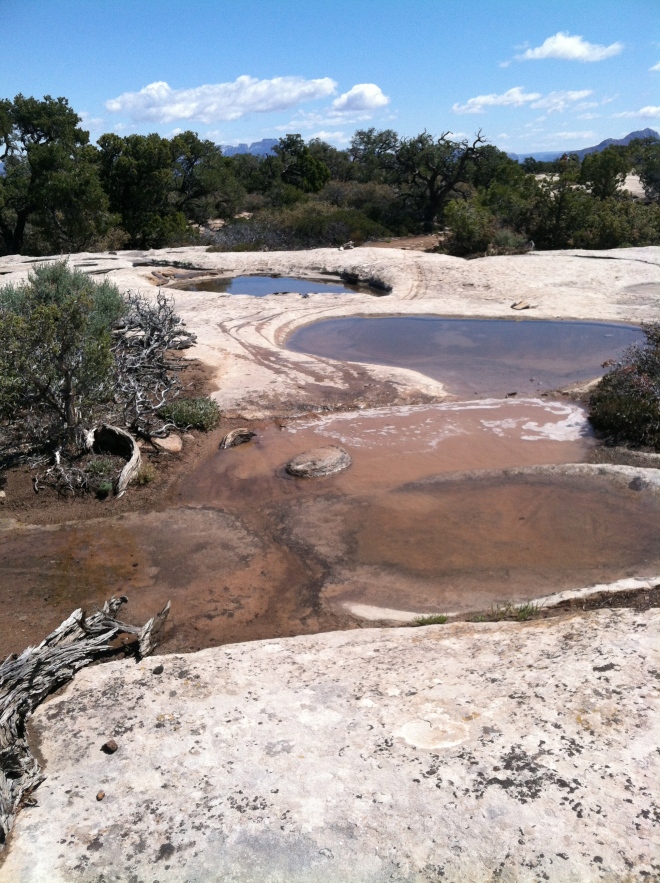 We may have missed a day of riding because of the rain, but it sure left some beautiful pools for us to ride around and sometimes through them. 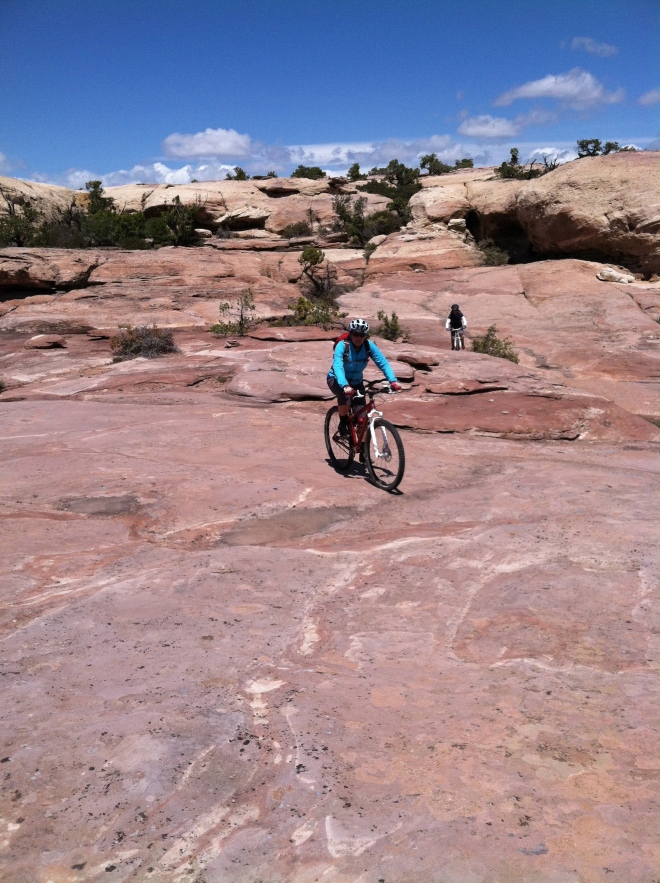 Amelia enjoying the rock, Chris in the background. 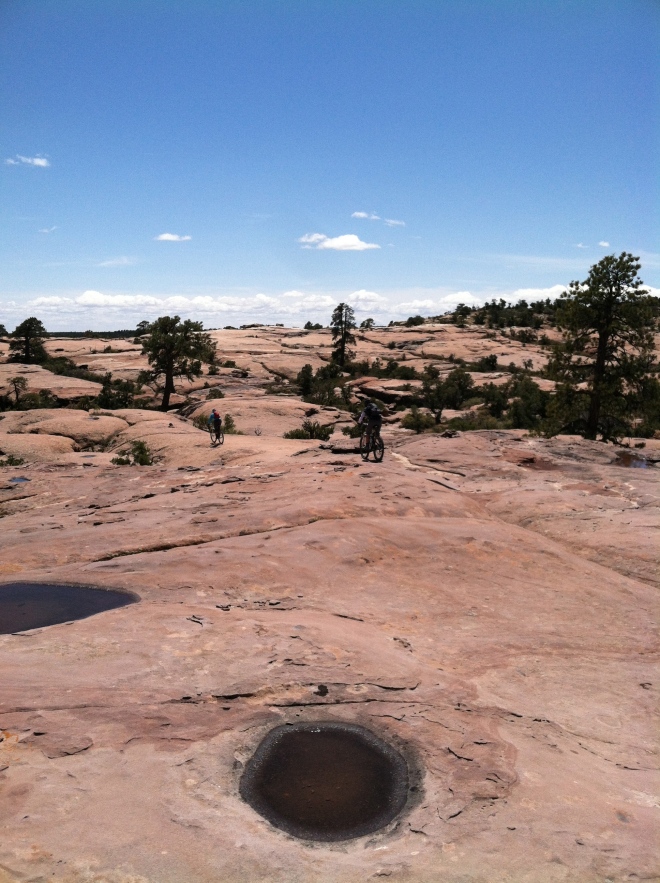 After Hurricane we went to Las Vegas to visit my Dad and his wife, Lu. We spent two days there in a 935 space RV Resort. It was weird after spending so many days in beautiful locations. From there we drove through Death Valley to one of our favorite spots, the Alabama Hills, for a quick hitched evening. Then it was back to Mammoth and condo living…..

Parking for Mesquite Sand Dunes in Death Valley. When we first arrived there was no one here, so we decided to have a little lunch before walking the dunes. While lunching, this bus full of Euros shows up. It was hilarious watching all the Euros taking pictures of our Airstream. They were all quite impressed.

The dunes crawling with Euros. It must have only been a 20 minute stop, because they quickly loaded back up in the bus, but not without posing in front of the Airstream for more pictures. 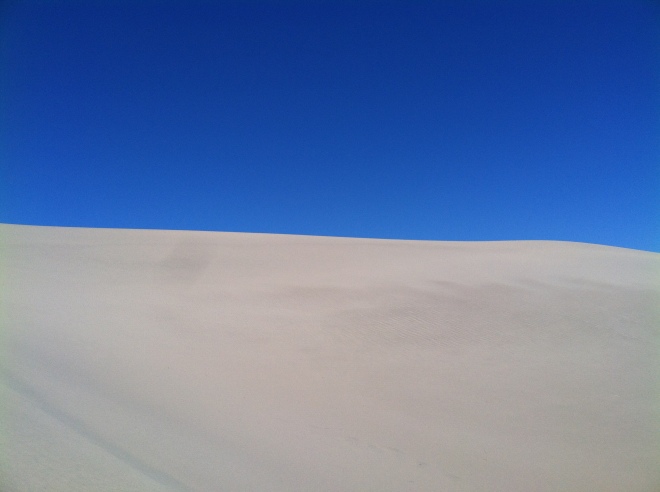 Morning in the Alabama Hills.