This was our first visit to the Lake Isabella/Kernville area.  My Uncle used to have a cabin there, and year after year he would always invite me up, instead, just like a lemming, it was up the 395 to Mammoth.

For quite a while Forest has been talking about wanting to go to Kernville. And we’ve heard good things from friends that have done it. The whole trip came together rather quickly.  Amelia took a mental health day on Friday, and carpooled on Thursday, so Forest and I were able to pick her up when school got out. I knew this was going to be a memorable adventure when on the short trip from our house to Amelia’s school, Sara left a little butt stain on Forest’s shorts and shirt.  I know that smell well, because it has happened to me before.  The poor girl can’t help it that she was born with a pug’s tail. It’s always safest to tuck her tail under before letting her sit on your lap.

The drought is killing Lake Isabella and the surrounding communities.  When full, the lake holds 578,000 acre feet of water. Right now it has 45,395 acre feet.  It is shocking.  Water sports on Isabella and rafting the Kern River are the big economic drivers in the area.  No agua is no bueno.  I spoke with a handful of business owners and they were all crying the blues.  It is a sad situation.

We were thinking we were smart by staying in the Frandy Campground in town, so we could just walk to Kern River Brewing Company.  Man oh man, Frandy was a real eye opener.  Our first clue should’ve been the chalk lines separating the “campsites”.  But on Thursday night when we arrived the place was empty, but that was Thursday.  Friday was like a huge tailgating event at Qualcomm stadium.

The Kern River is to Bakersfield as the Colorado River is to San Diego.  And like most rivers, it attracts a certain element, and that element was on the other side of the chalk line.  Eleven kids in their 20’s, all of them oblivious to their surroundings and hell bent on one thing, PARTYING!  And that kind of partying doesn’t understand curfew.  I had no idea people still do beer bongs.  This must be karmic payback.  I was probably that guy, at their age, minus all the tattoos and cigarettes.  The whole scene is not so cute now that I’m in my mid fifties.  I’d much rather be in the middle of nowhere or an RV Park. Did I say RV Park? I must be getting old…

This should’ve also been a clue. 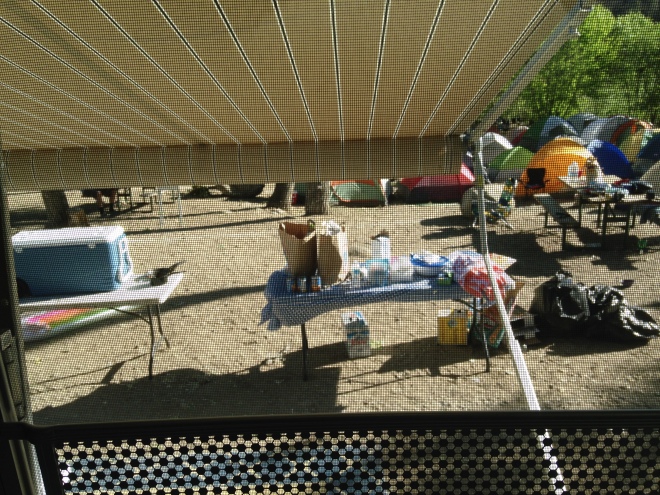 Those aren’t our tables you see looking out our door. Nice tent city.

All the rides in the area require a shuttle.  There’s one company in town that does it and they are very expensive, then there’s Shuttle Bob.  He’s a one man, under the radar, character.  Bob saved us a lot of money and told us some great stories.  The first day he showed up with a little gift for Amelia, an arrowhead.  He said he always gets a gift for the ladies.  For the guys he just gives them bullshit.  How it works is in the morning he sets the meeting place.  Then both cars go to the end of the trail.  He leaves his car there, jumps in your car, and drives with you to the start.  Then he drives your car back to where his car is, leaves your car there, and gets in his car and leaves.  So obviously the scenario requires trust and two keys.

Shuttle Bob thought we were nuts on our steel, hard tail, single speed bikes, apparently that’s not the bike of choice in Kernville, but that’s the bike we ride.  On Friday we did Unal Trail to Just Outstanding (JO) to Wagy Trail.  Wagy was super rutty from motorcycles and not really our cup of tea.  Forest loved it.  As I mentioned in the last blog, he’s just humoring us when riding with us.  Saturday was the Cannell Trail.  There was a tad bit more uphill hike a biking than we were expecting, but when you were on your bike, wow what a ride.

Amelia on the beautiful Unal Trail. 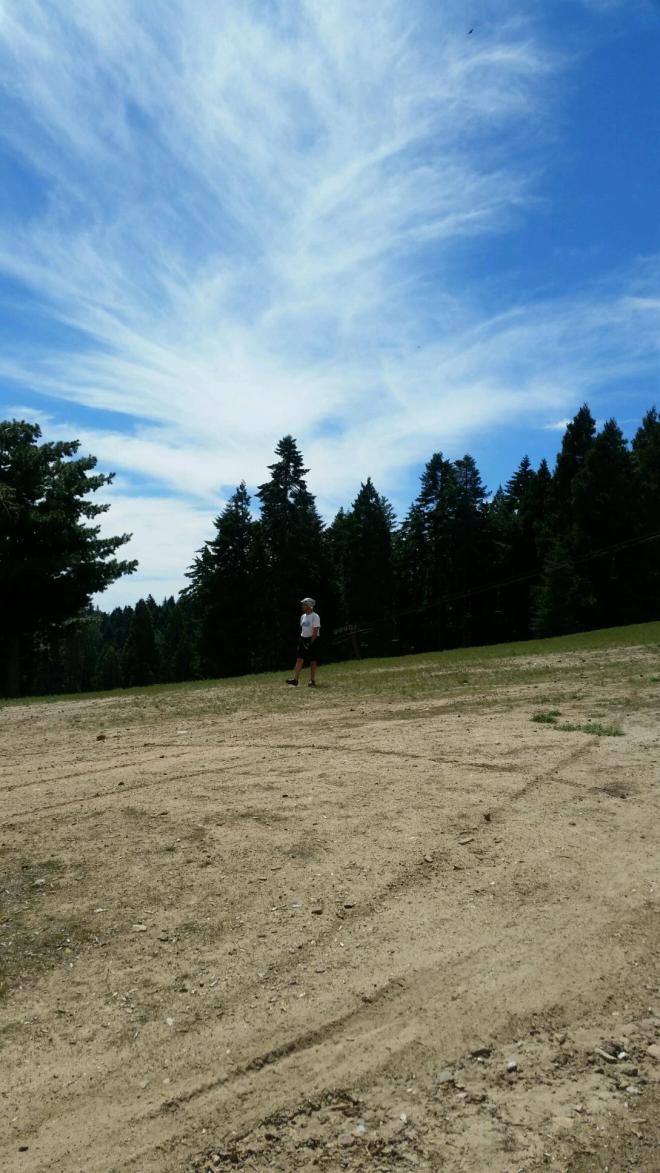 Yours truly, walking around the Alta Sierra Ski Area where the Just Outstanding trail begins.  The ski resort never opened this year, and only one day last season.  Can you say “a dying industry?” 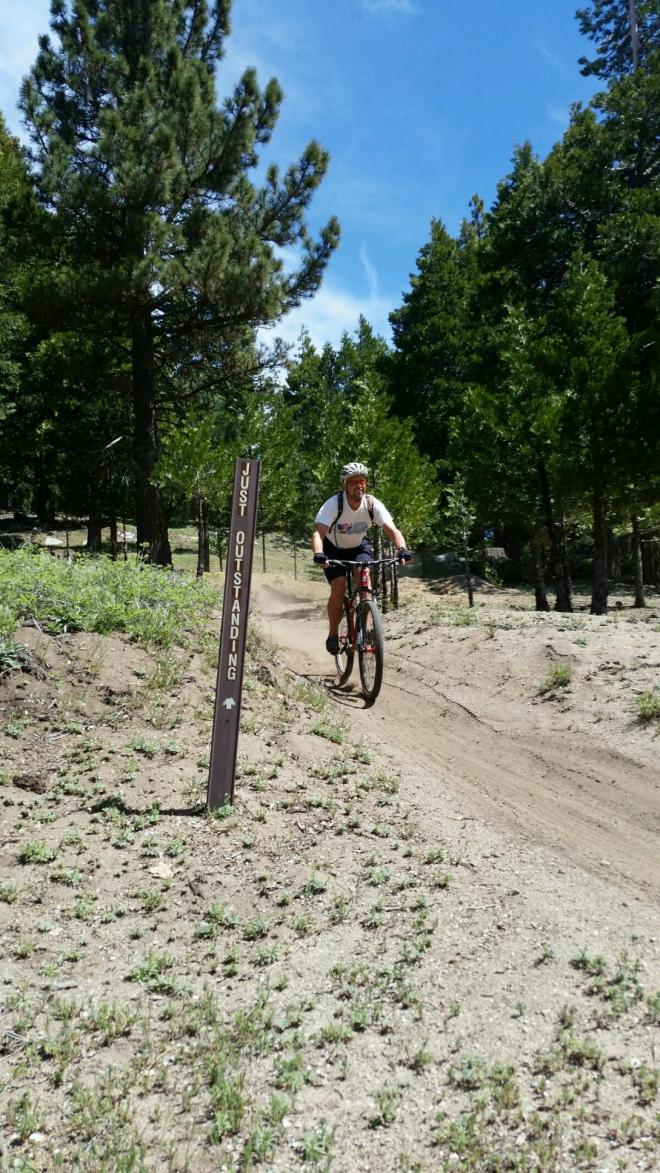 It was Just Oustanding.

Forest flying through the manzanita tunnel on JO. 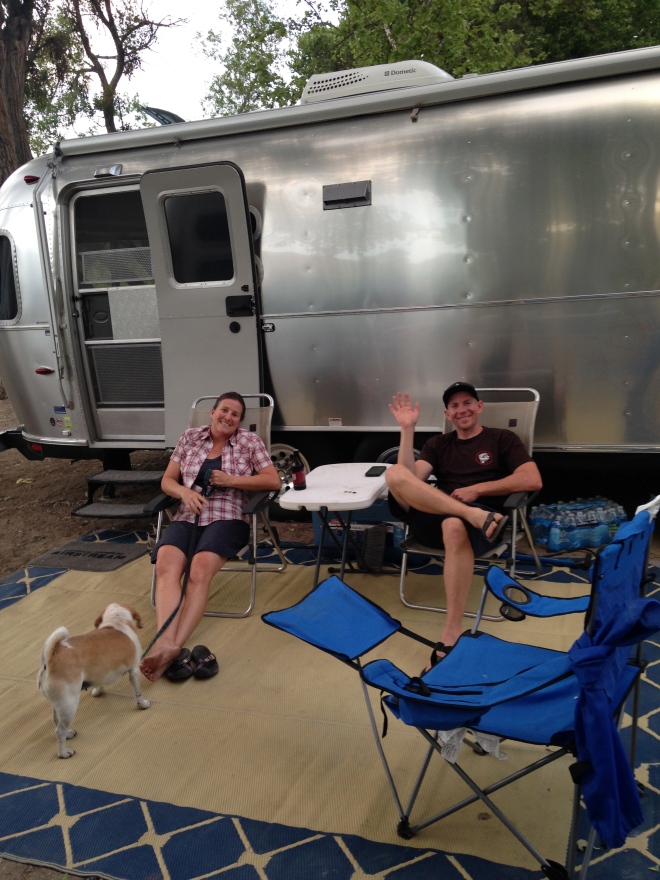 The cousins enjoying each other’s company post ride on Friday and finding humor in our neighbors.

Shuttle Bob and me at the top of Sherman Pass and the start of the Cannell Trail. From where we were you could see Mt. Whitney. Bob is quite a character. Also a wearer of great T-shirts.

Here’s another one of Bob’s shirts. Amelia thought so much of it, she ran out to the Shell Gas Station to buy one.

If I have a water bottle on my bike it’s a long ride.

There were still a few patches of snow from last week’s storm. 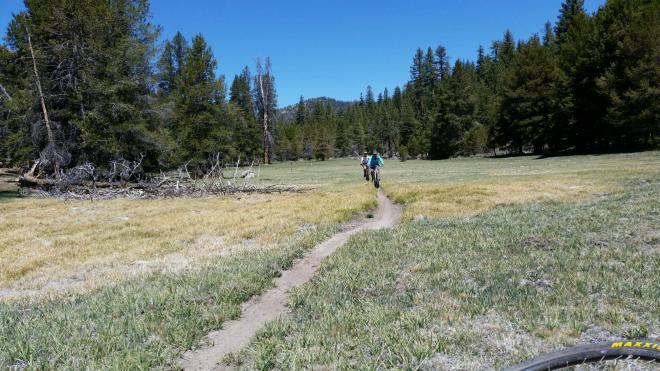 One of the many meadows we crossed before hitting the Plunge.

Amelia on one last little push before the final descent to the truck. 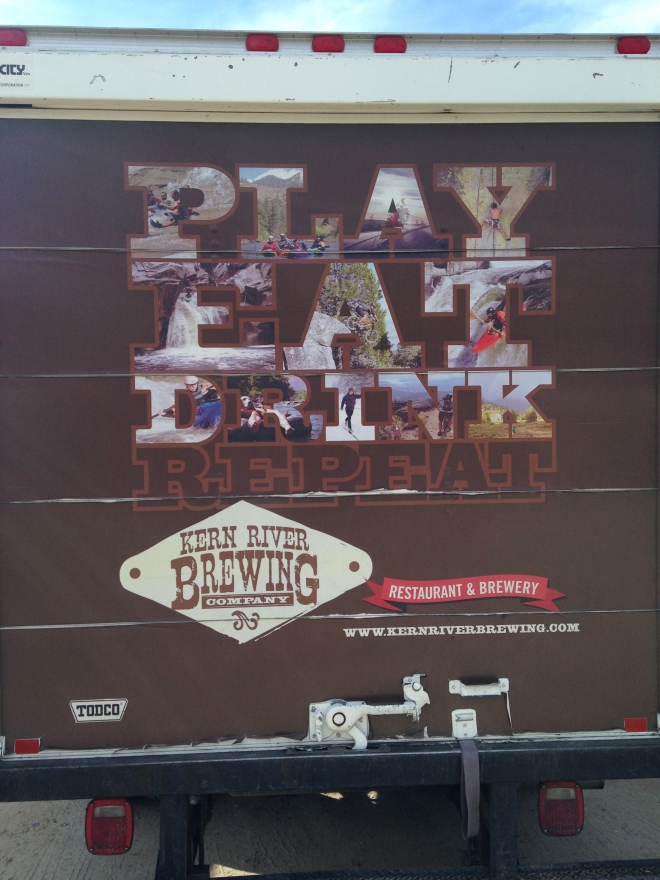 A great slogan, and a really cool place. Two thumbs up on the beer, food, and employees. We went there two nights in a row.  If you look closely at the R in drink you’ll see a basset hound.

Perhaps it was our last trip to Hurricane with Roger the poet, but Amelia was inspired and she wrote a poem.