I never, ever, ever, dreamed we’d be back at the KOA in Black Canyon City.  If you regularly follow the blog, you’ll remember I called this place a dump.  Our first visit here it was 100 plus degrees and we were limping home with a rear broken window on the Airstream.

Little did we know at the time, but Black Canyon City is the midpoint of Black Canyon Trail, an IMBA (International Mountain Bike Association) Epic Trail .  It’s somewhere around 70 miles of single track that parallels the west side I-17 from Highway 69 south to the Carefree Highway.  Parallels might be the wrong word.  This is not like a paved bike path or a frontage road along the interstate, instead it’s very remote wilderness.

It was an absolutely amazing trail, we rode around 20 miles of it. The only complaint is a decent map is hard to come by and there are no signs identicating where you are, so if you are the adventurous sort, you would love the BCT.  I hope the pictures portray the beauty and remoteness.

Lots of climbing up multiple canyons. 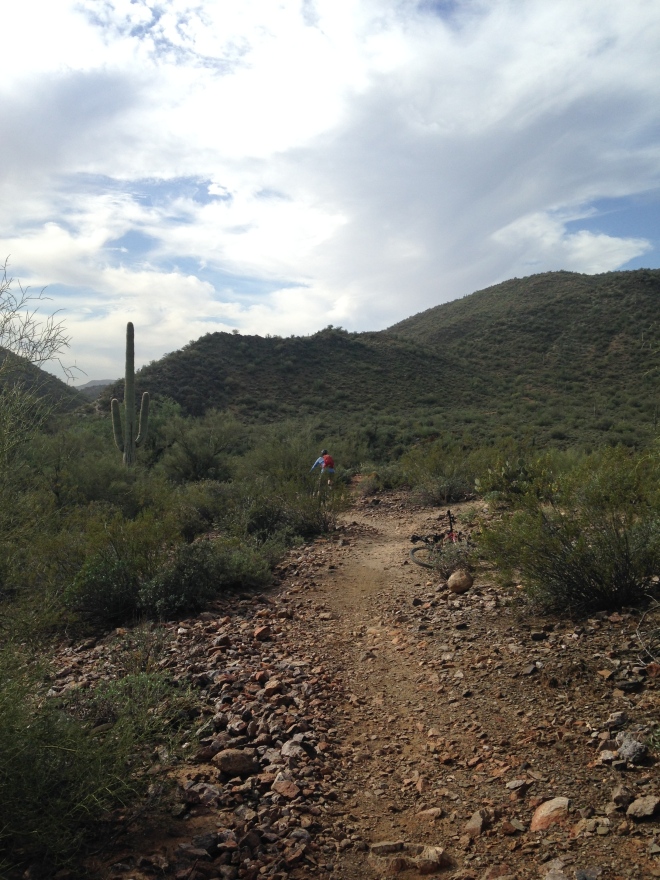 Awesome true single track in the middle of nowhere. 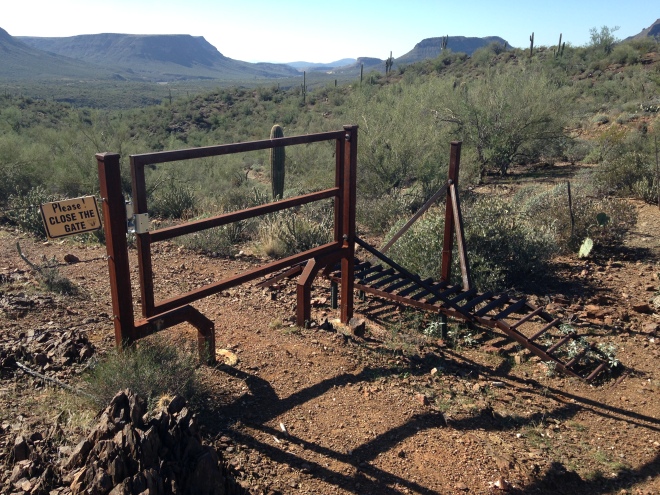 All the gates had long ramps. Everywhere we’ve biked the gates have been a little different. Typically in SD you have to get off your bike and walk over a bar. In Gooseberry, it’s a real steep rebar ramp. 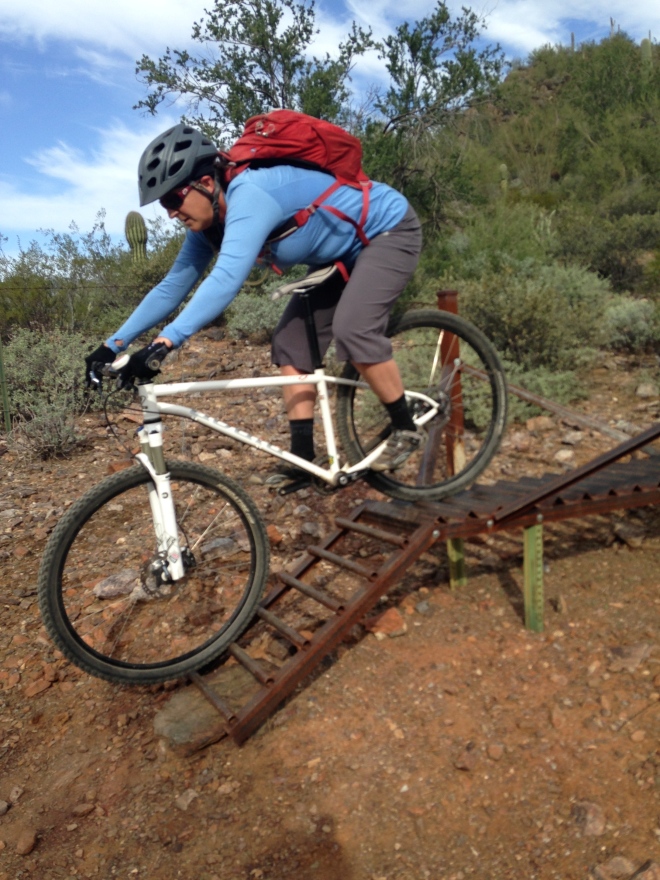 And this is how you ride the ramp. 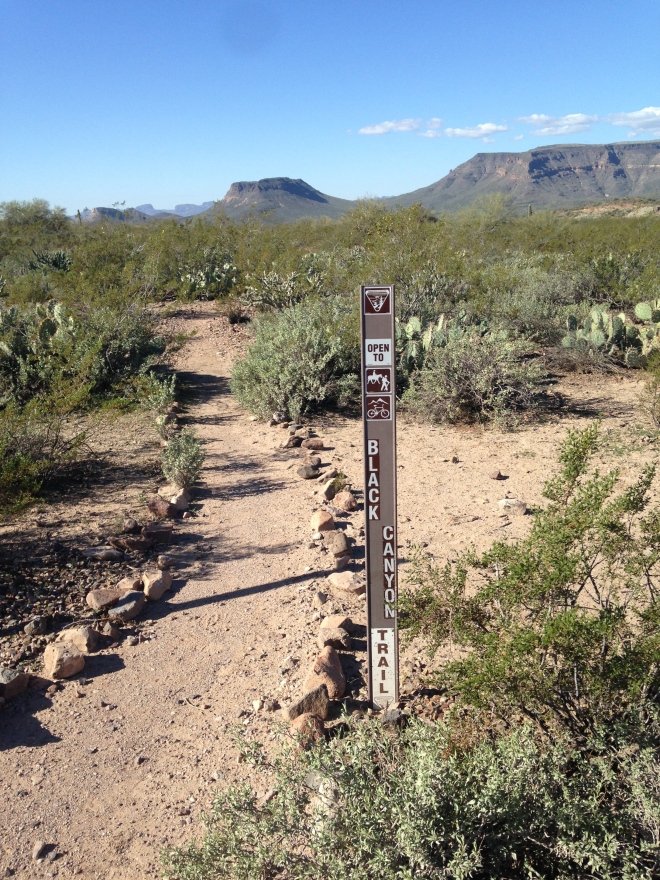 The start of the Table Mesa segment. 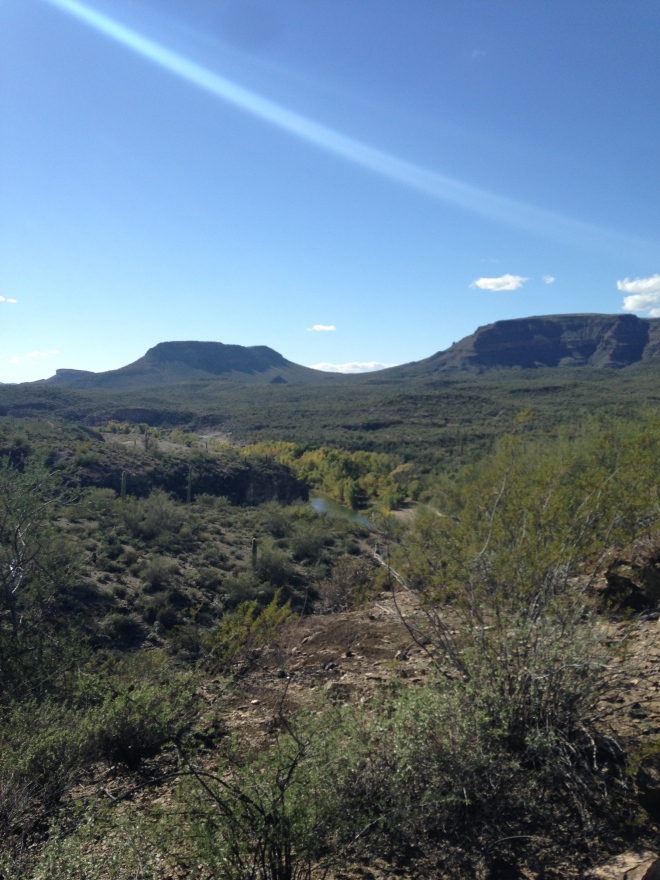 You can just see a little of the Agua Fria River. We crossed it multiple times. This time of the year it’s just a creek. 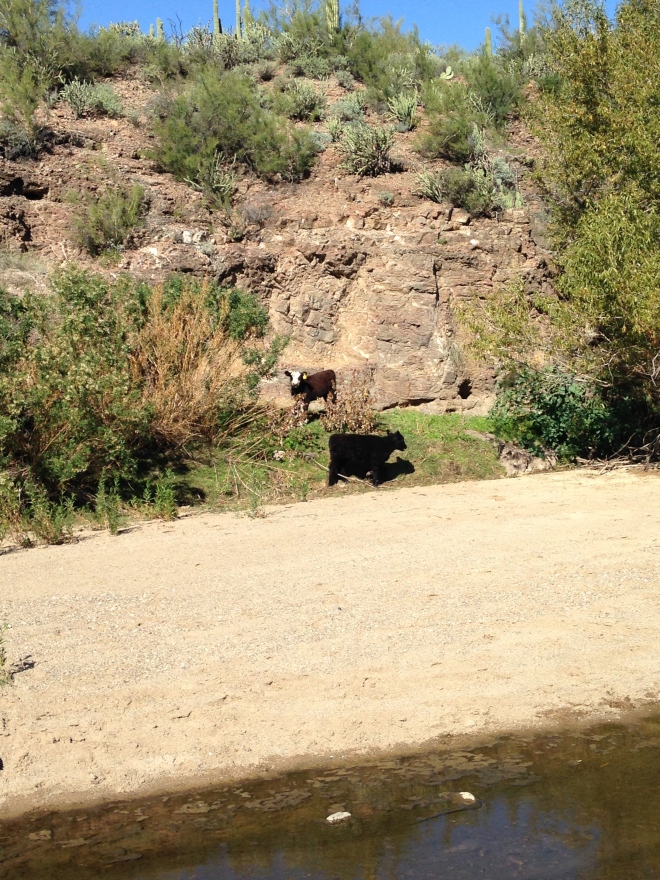 If you’re riding BLM land the odds are good you’ll come across some cattle. These cows were easily spooked. I’m guessing they don’t see a lot of people. 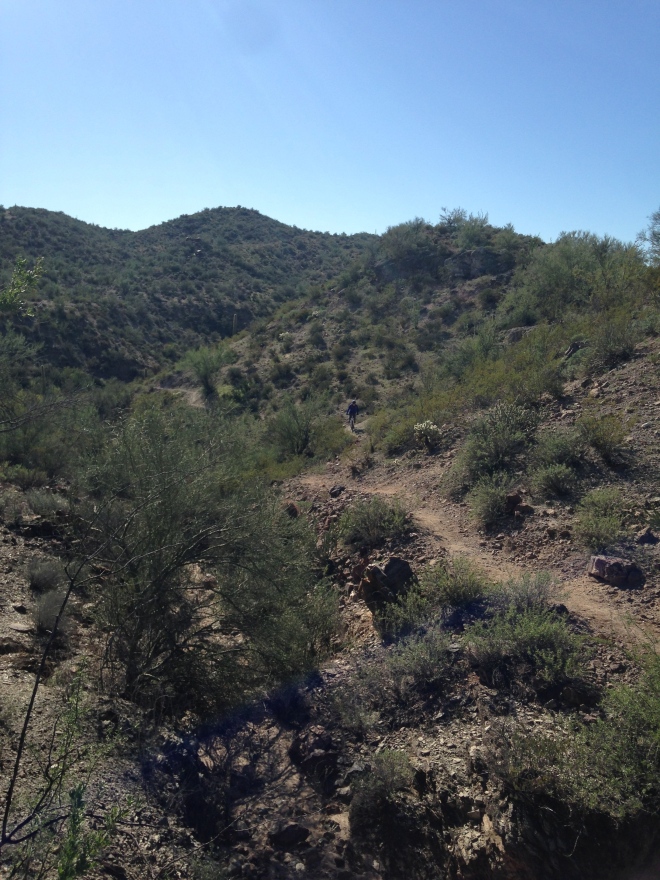 The signage left a lot to be desired, but the BCT was one hell of a trail.

It was in the 30’s at night, couple that with it being dark so early, we actually turned the TV on. 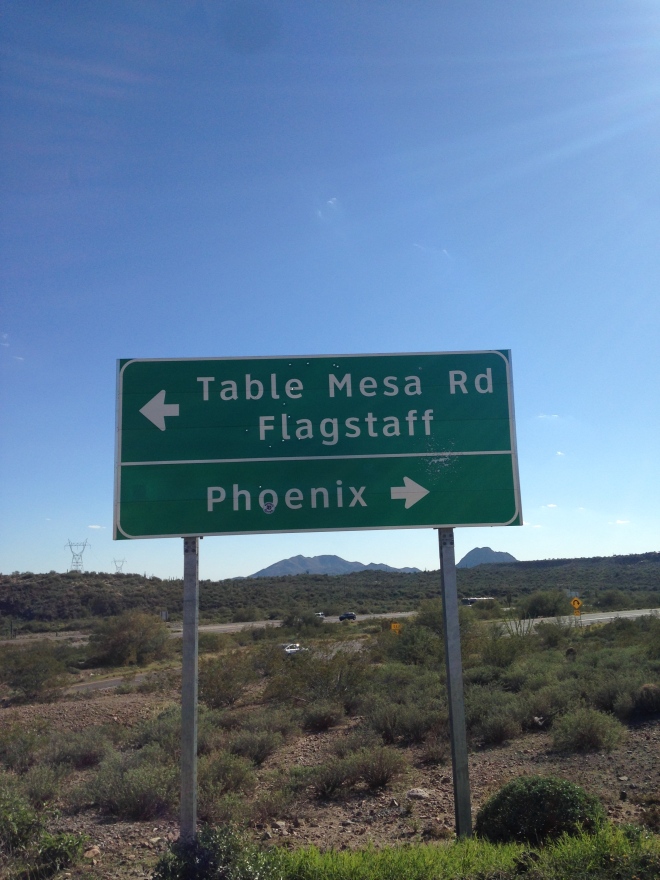 Really?  Table Mesa?  Come on, a little redundancy anyone?  On another note, it doesn’t matter what state you are in, there’s always shitheads that think it’s cool to shoot up signs.

AZ had some interesting drunk driving signs over the freeway.  Unfortunately I wasn’t quick enough to get a pic of the best one.  It read:  “Drinking and driving go together like peas and guac.”

Probably the best sunset of the year and in all places, it was Black Canyon City!  It almost looks fake, as if it’s from a movie set.

We got denied the glory of spending the night at the Walmart in Yuma on the way out because of Sara’s snakebite, so we made up for it on the way home.  400 miles is about a 100 more than we prefer to tow, especially at the end of a trip.  Yuma is the midway point, so it’s the perfect stop. All over the USA, every day of the year, people utilize WalMart parking lots to spend the night in their RVs or cars if you are less fortunate.  It is an interesting thing to do that leaves you with a lot to ponder.  I think someone actually wrote a book about driving across the United States and spending every night in a different WalMart parking lot.

Whenever I think of Yuma, I think of the Padres and seeing a young Tony Gwynn.  Back in the day, Yuma was the Spring Training home of the Padres.  The town has grown and changed dramatically since those days.  We were at the new WalMart on the east side of Yuma.  This one is extra special because a train goes by approximately every 90 minutes.  Ear plugs help, and an ambien helps even more.  Not only do you have everything that WalMart offers 24 hours a day, including their restrooms, this one, like most, had a McDonald’s in it.  And in the parking lot a Del Taco and Panda Express.

Busloads of Donald Trump’s amigos were streaming into Walmart to spend their hard earned money before heading out to the agriculture fields for more hard work.

They call these Farm Labor Vehicles.  There were twelve in the lot that morning.

The Dutchman wasn’t really a Dutchman, and he wasn’t lost.  He was German and the lost refers to his gold mine somewhere in the Superstition Mountains.  In the 19th century, Dutchman was kind of a generic term used for Europeans from Germany and surrounding countries.  Kind of like how I now use the term Euro.  And his lost gold mine is one of the famous tales of the old west, or at least in Arizona.

The last time we were in Arizona it was the dead of summer.  The weather is much more hospitable this time of year, heck it’s almost as nice as San Diego, almost.

The blogosphere was correct about this campground.  It is wonderful, well ran, and with many amenities like bird feeders throughout, great hot showers that are included in the cost, and even a mountain bike trail.

Our friends, Old man Birch and his wife, Georgie, met us out here for three of the four days. Birch’s daughter, Jenny, lives somewhere in Phoenix, so she came out for an overnight stay with her son Kyle.  And their Uncle Wayne also showed up for a day.  All in all it was a wonderful time.

Mrs. Camp Host and her double rake. Raking the decomposed granite is both serious business and artwork!

Beyond the basin of Siphon Draw Trail in the Superstition Mountains.

Old man Birch and Amelia cruising the mountain bike trail around the campground. 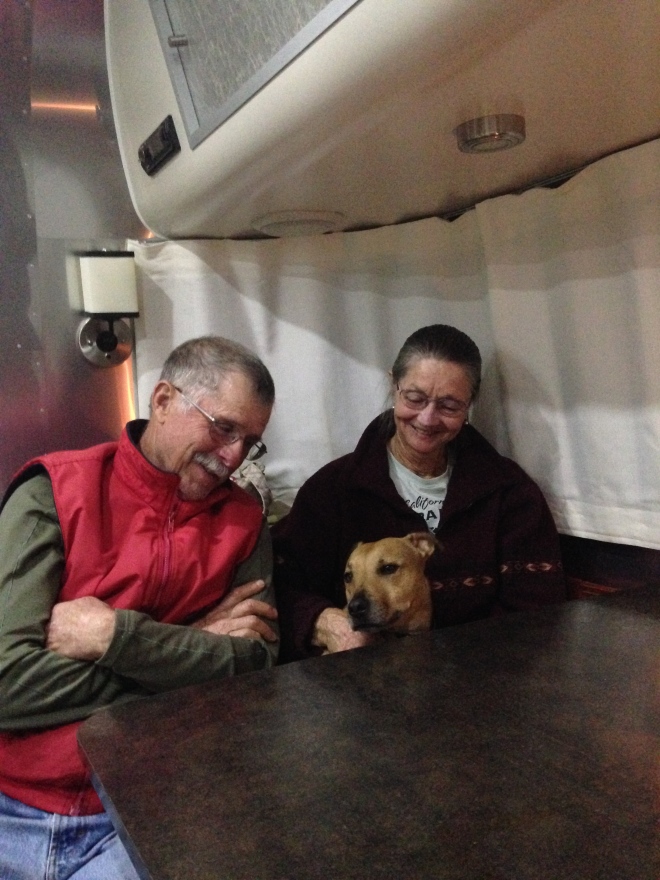 Old man Birch and Georgie. The happy couple doting on their son.

Amelia on one of the Hawes Trails.

The Superstition Mountains. “There’s gold out yonder in them there mountains.” 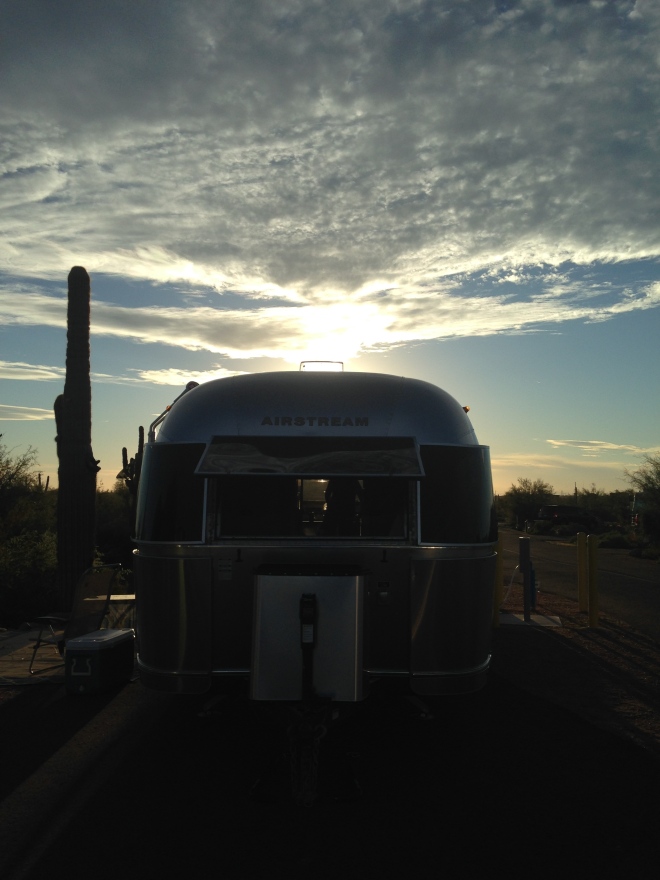 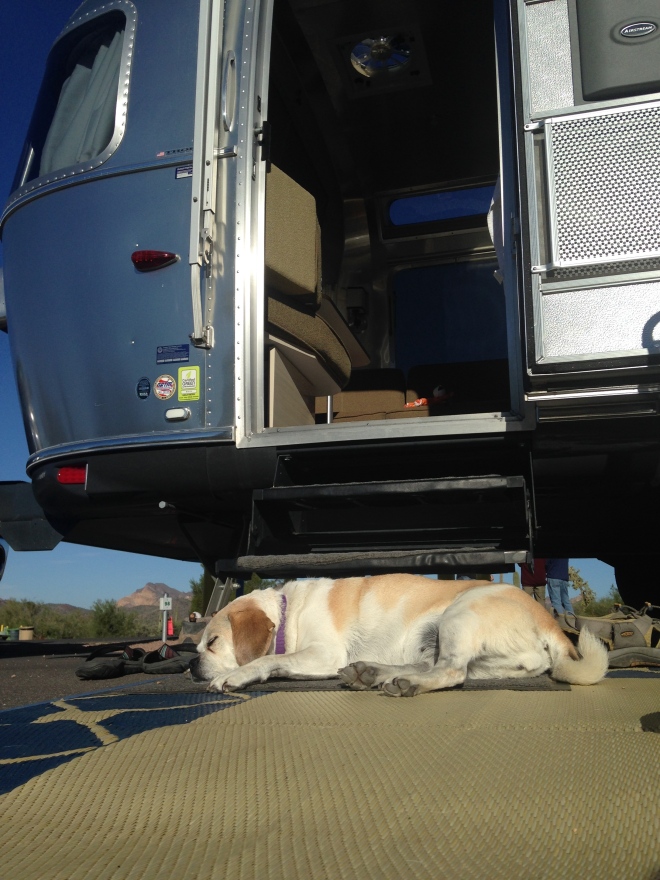 I won’t leave you in suspense, Sara is alive.  But boy oh boy, I was scared.  She is never outside without supervision.  Usually the slider is open and we keep an eye on her, and that’s only mid morning to mid afternoon.  She’s never out morning or evening unless someone is outside with her.  The coyotes are thick.  Two dogs have been pulled through the wrought iron fence by coyotes in our neighborhood.  One didn’t survive and the other was rescued.  Our neighbor jumped over the fence, scared the shit out of the coyote and the coyote dropped their little dog, Sascha.

At first I didn’t realize she got bit, the dang Puggle never makes a noise.  I thought I got her out of harm’s way.  The rattler was on our mat outside of the sliding glass door in our kitchen.  Sara spotted it and was getting ready to play with it.  I scooped her up and jumped over the rattler, put her leash on, attached it to the door handle leading to the garage, and put her in the garage.

Adrenaline was pumping through my veins.  I grabbed the shovel and killed the rattler, then took a picture and tossed it in the garbage.  I texted the pic to Amelia and our neighbor.  Then went to the garage to get Sara and bring her out to the blood.  She was acting strange, really subdued, and not right.  That’s when I noticed the blood on her nose, that damn rattler bit her!

The rest was a complete blur. We hauled ass to the vet’s.  I ran in with her in my arms, looking like a madman.  They immediately responded like the emergency it was.  One of the girls finally comes out to tell me she’s progressing well.  Half an hour later, the vet comes out and says, “Hey I recognize you, you’re the Fins guy!  Sara is going to be fine, it’s just going to be a little longer until the IV drips all the Antivenin into her.”  Then the vet comes back and shows me his Fins comeback cup.  “I use this all the time, and tell everyone that these were the best fish tacos ever.”

It was like some crazy surreal dream.  Tonight we were going to drive to Yuma to start our Thanksgiving trip, but not now.  It doesn’t matter, our girl is alive, we can head out tomorrow or even Sunday.  We’ll see how she’s doing tomorrow.

Remember, it’s not polite to ask how much it cost… 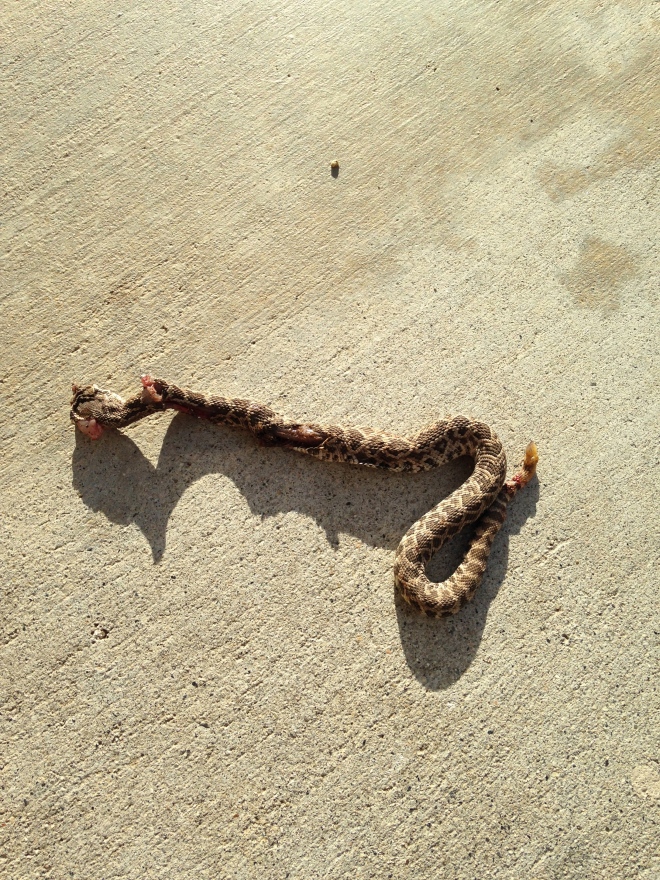 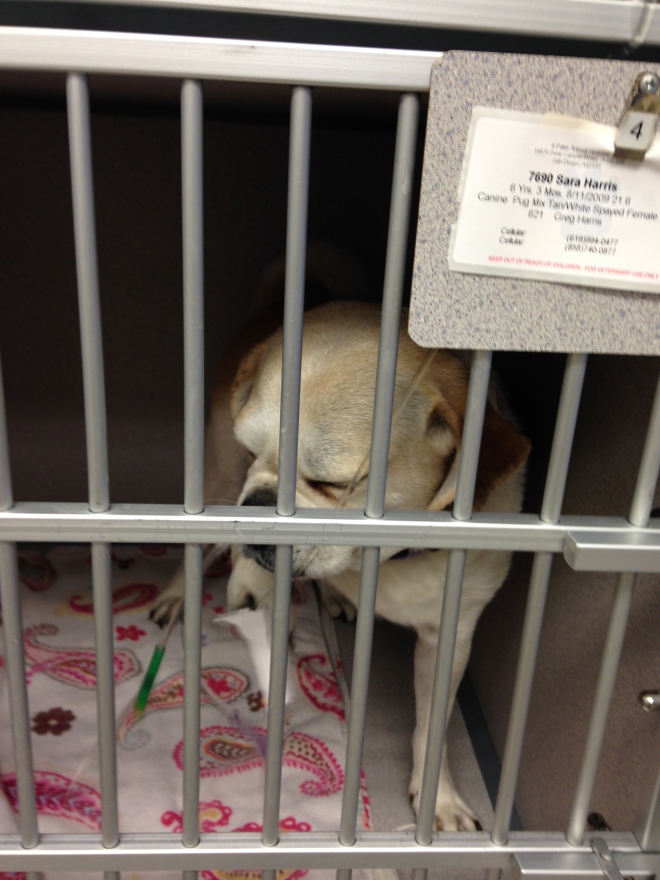 Swollen face, you can really tell between her eyes. 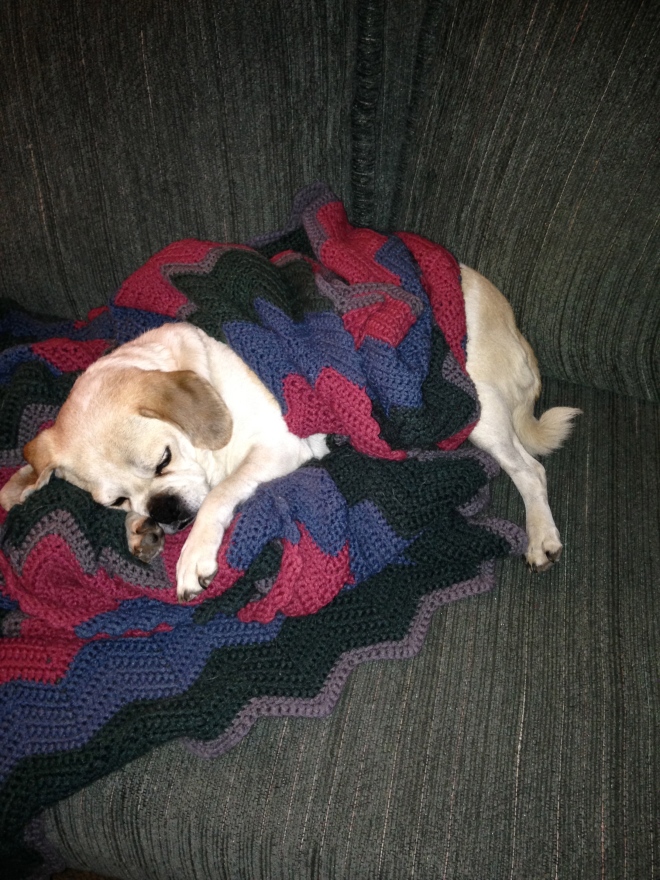