Every Tom, Dick, and Deborah Harry were telling us it’s going to be hot when they heard of our plans to visit Arizona in July.  If you live in San Diego it’s simple math: Arizona + July = too hot.  Isn’t that why all the Zonies come to San Diego in the summer?  But Prescott is around 5,200 ft., and we were tracking the weather and knew that wasn’t the case.  It’s monsoon season here.  Blue skies in the morning and thunder showers almost every afternoon.  80’s during the day and 60’s at night.  So ride bikes in the morning and relax in the afternoon.  Even while we were here, people were texting us to ask how hot it was.

When I think of monsoons for some reason I think of the Philippines.  Maybe monsoons have been going on forever in Arizona.  But it seems like a new phenomenon or at least it hasn’t been on my radar until this trip.

On our second day, we’ve never heard such thunder.  A few times it scared the hell out of all three of us.  The rain came down at an unbelievable rate for an hour.  We were concerned, especially since a week earlier 10 people died in a flash flood near Payson, Arizona.  When it finally stopped, everyone came out of their rigs and bonded like people always do in any near natural disaster or major weather event.  Everyone was chatting everyone up.  Old timers were saying it’s the heaviest downpour they’ve ever seen.  Complete strangers were friends.  And everyone was talking about the rain.  It’s quite interesting how these type of events bring out the best in most people.   Campground management was out and about assessing damages.  The couple from Montana next to us had to have almost two feet of water pumped out of their site.  The whole campground is dirt, no paved roads.  A couple of the roads had huge ruts that needed to be filled and were that very same day.  One gal said she has lived in Prescott 12 years and had never seen anything like it.  We’ll certainly remember it for a long time.

Amelia on Sundog trail the morning of the big rain.

We were having a jolly good time, sitting under the awning and watching the rainfall, as pleased as punch.

Then in no time at all, all hell broke loose.  We watched the show mother nature was putting on from the shelter of the Airstream.

If the mat wasn’t nailed down it would’ve floated away.

The storm was over, but the water continued flowing off the rocks behind us and through our site for the entire day.  That evening it rained again.  I was standing under the awning grilling on our little charcoal bbq in ankle deep water.

We stayed at Point of Rocks RV Campground.  It was a unique place.  It looks like a campground, but it’s an RV park.  All dirt, every site a full hook up, and only RV’s allowed.  No tents, no car camping.  You are amidst the granite dells, a short walk to Watson Lake, and a friendly helpful staff.  Two thumbs up!

The biking exceeded our expectations.  Next time it will be even better now that we are a little more familiar with the lay of the land.  A couple more take aways from our visit: there are a lot of senior citizens out here and cicadas make a whole lot of racket. 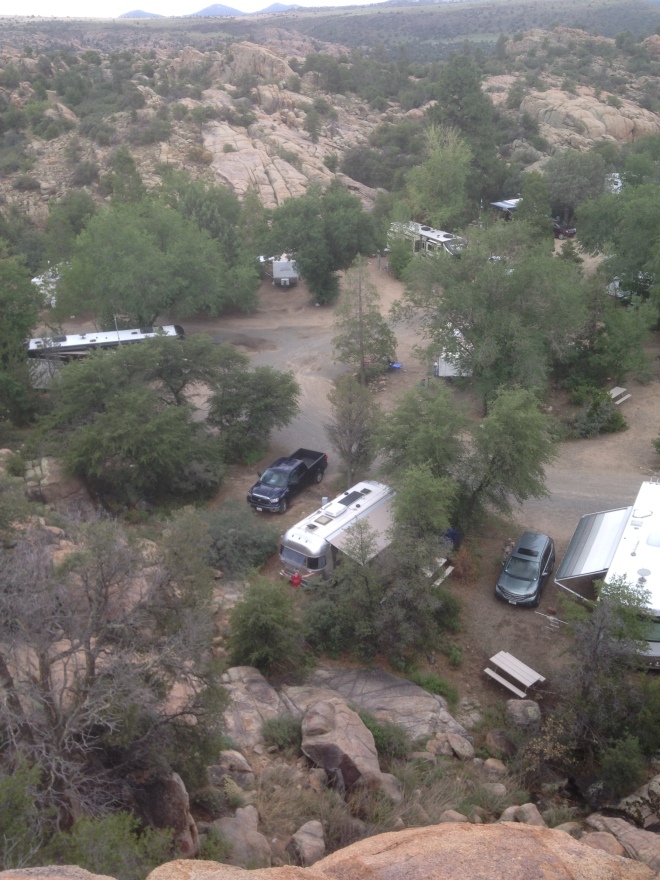 I bouldered up to take this shot.  On the day of the monsoonal storm there was an amazing display of waterfalls cascading down into our site.  Can you see Amelia? 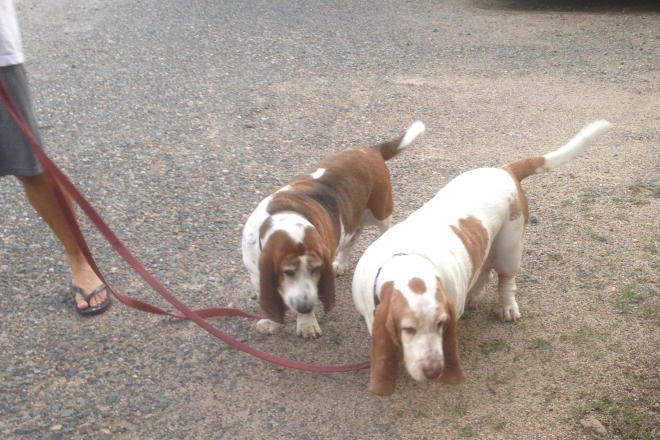 Basset Hounds make us smile!  A highlight of every day was when the Bassets walked the campground loop.  This is Clifford and Moose.  Both 6 years old.  Moose, the white one, clocks in at 90 pounds!!

Just a few flowers out, this one is a Silver Leaf Nightshade. 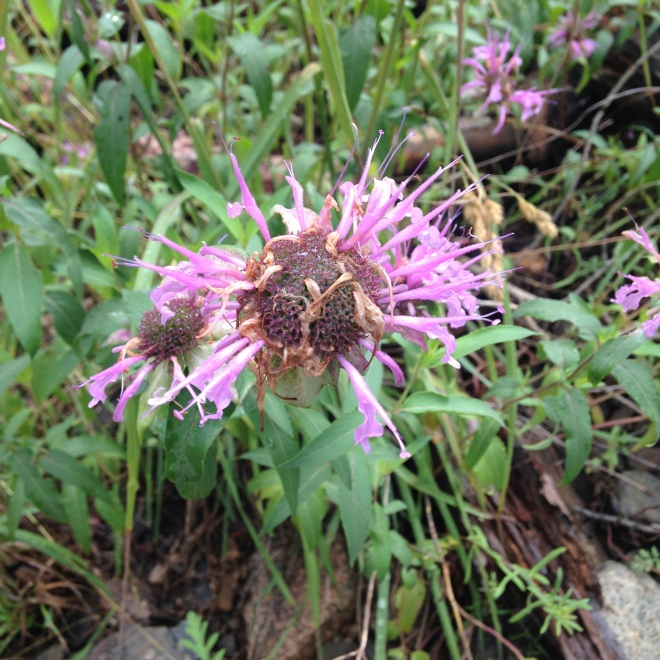 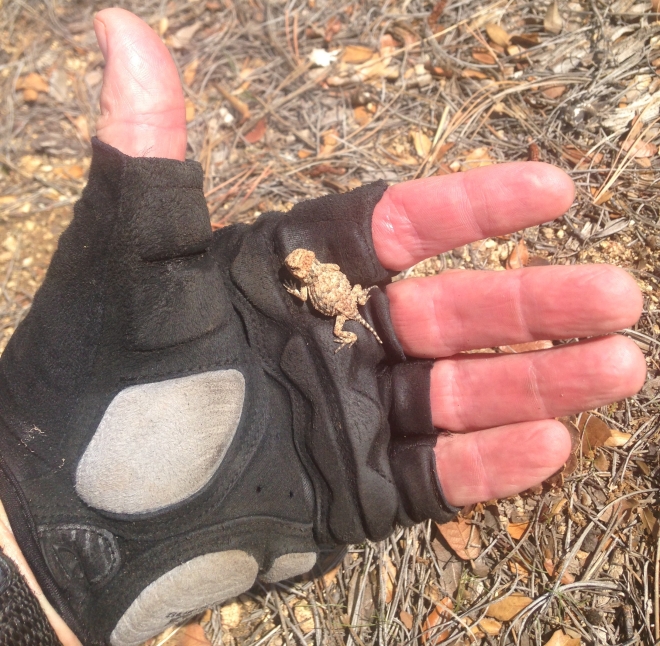 You can bet this will be Amelia’s next art project, making stars out of old bike chains.  We saw it at High Gear bikes. 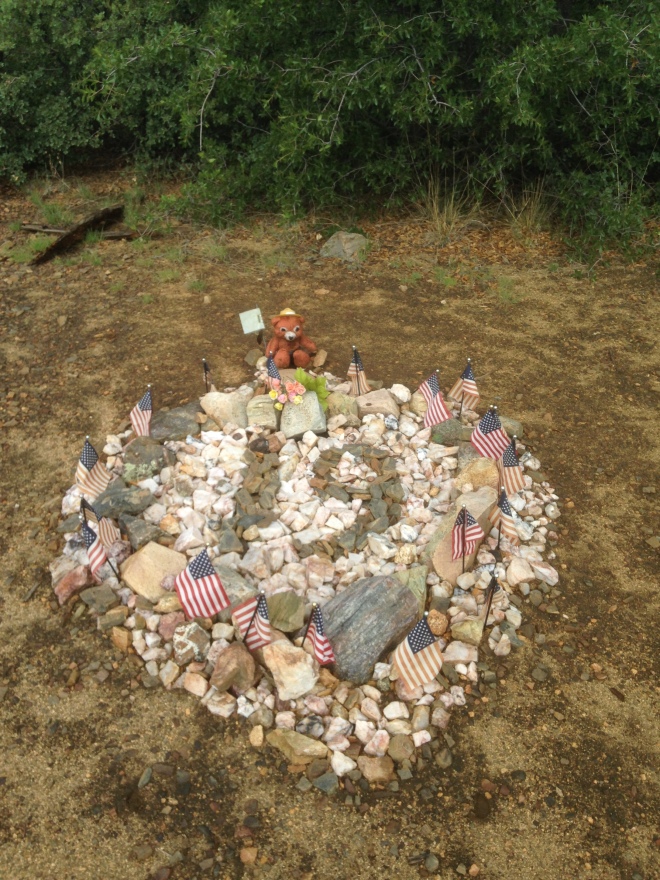 Tragedies happen all the time, a week later another one happens, then another and people forget all about something that’s only a few weeks old.  The Prescott community has not forgotten about the 19 Prescott Fire Fighters, members of the Granite Mountain Hot Shots that died on June 30, 2003 in the Yarnell Hill Fire.  This memorial is on the trail that leads to Goldwater Lakes.  Throughout the town there’s reminders of the tragic event.

Way back in 1915, Granite Creek was dammed,  and that created the beautiful Watson Lake. 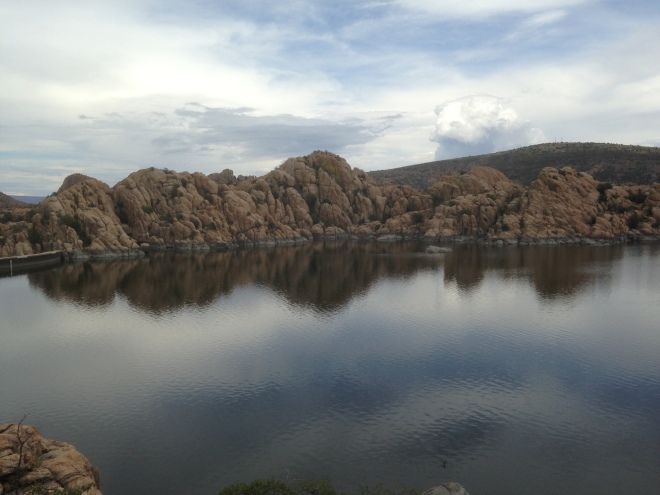 Another pic of Watson Lake.  We thought the lake was stunning. 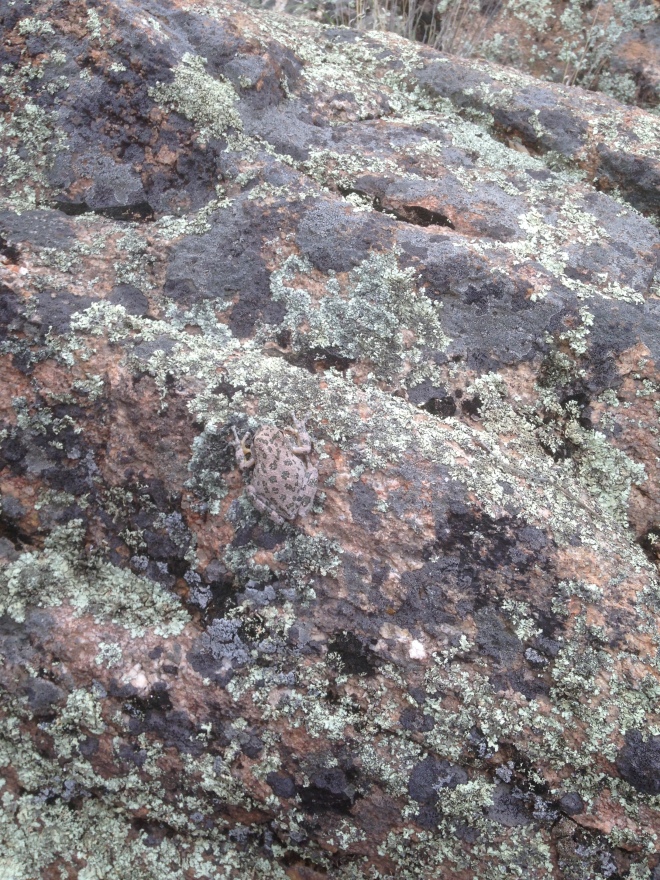 Can you see the amphibian? 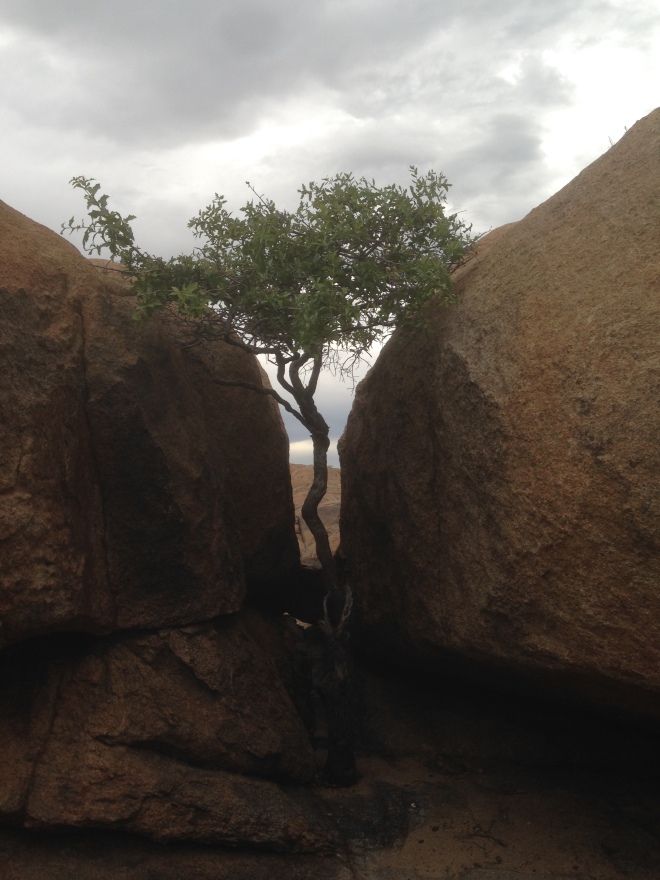 The area is a photographer’s dream. 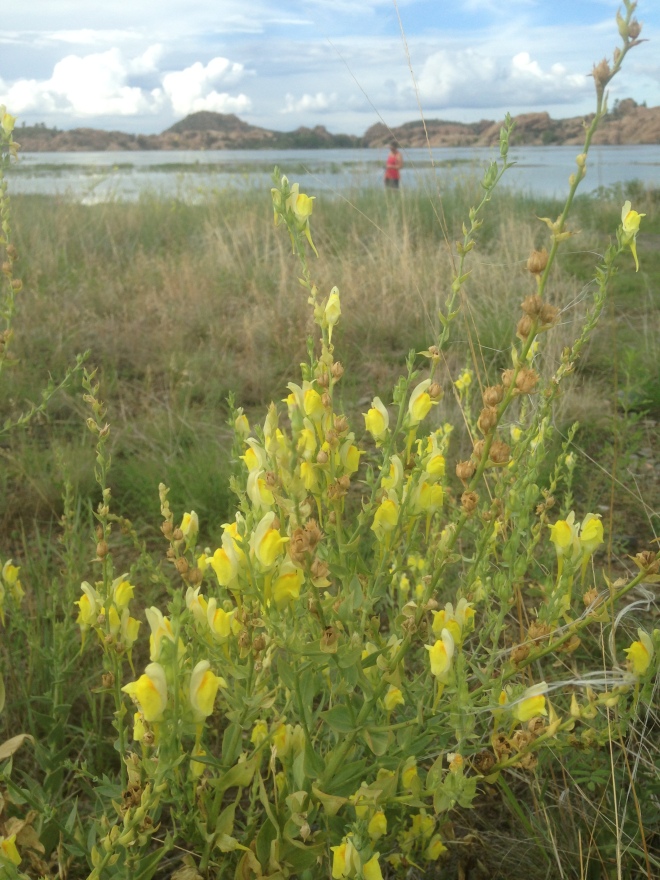 Dalmation Toadflax, a beautiful flower, but an invasive introduced from Europe in the 19th century. 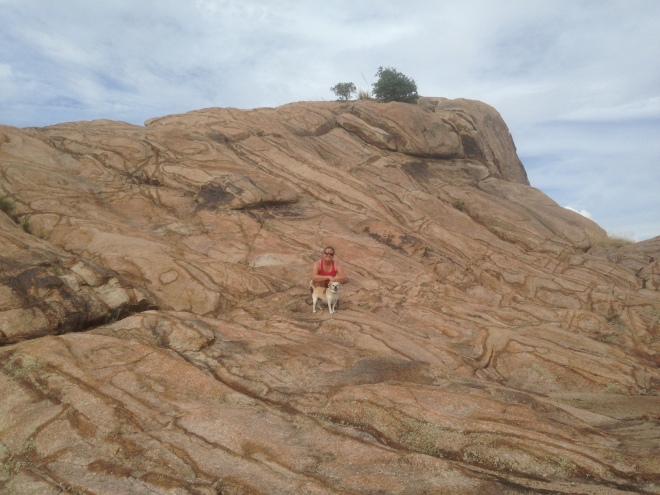 My girls on the granite of Willow Lake.  Willow and Watson Lakes are right next to each other. 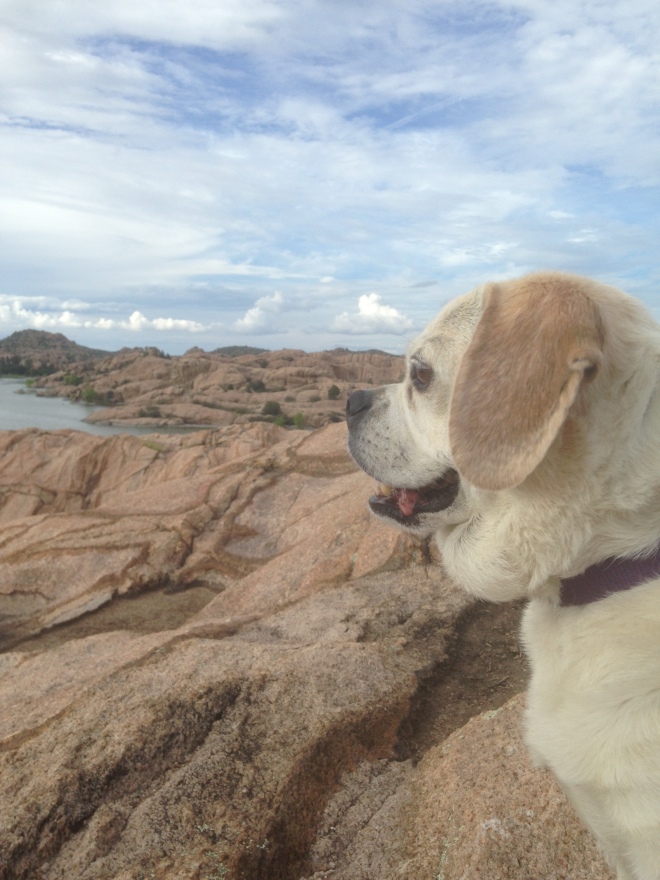 The Queen of Willow Lake. 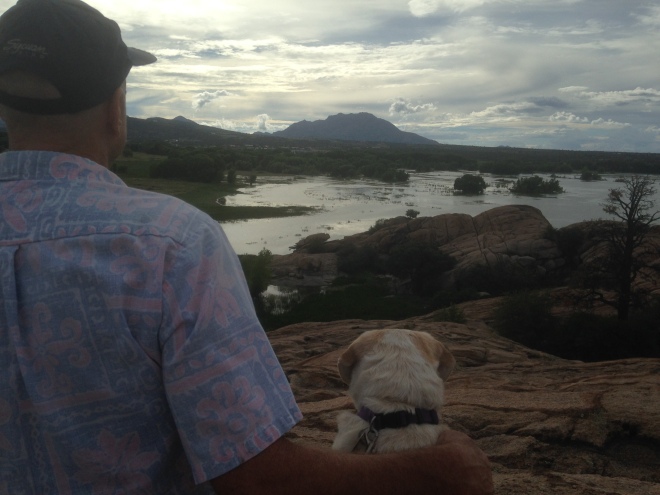 A man and his dog, above Willow Lake, Granite Mountain in the background.

And in ending, in case you don’t know, Prescott rhythms with biscuit. 🙂