Looking down on the old fire lookout tower from the summit.

At 6,535 feet Hot Springs Mountain is the highest peak in San Diego County.  Cuyamaca Peak, which most people incorrectly assume is the highest, is actually 23 feet shorter.  Over a decade ago, Amelia, R, and myself were in the area and on a lark thought we would summit the highest peak!  We were so ill-prepared and uninformed that we didn’t even realize it was on an Indian Reservation.  But we pushed forward anyway until we finally got scared of all the signs telling us to get out, so we turned around.  Since then the three of us have been itching to do it.  For a while they were not allowing any access and at one point the tribe leased out 5,000 acres to an off shoot of the infamous Blackwater Security called Eagle Rock Training Center.  The Tribe eventually evicted them.

This time Amelia did all the research, played phone tag with the Ranger that grants access, and eventually connected with him.  The short story is once you enter the Los Coyotes Reservation there is a little ranger station.  You check in there, every person must present their ID, your vehicle must be a 4×4, pay $10 per vehicle, the driver leaves her license in exchange for the key to unlock the gate.  When you come back down, exchange the key for your license.  It all sounded simple enough so we planned a day trip and invited R and our friend Laurie.

We left our house at 7am and arrived at the ranger station around 8:20.  The open sign was hanging and we were all excited, soon we’ll be at the summit of Hot Springs Mountain!  No one was in the ranger station, next door there was a portable bungalow that housed the police station, no one was there.  So we tried the phone number we had, and could hear it ringing in the ranger station.  All we could do was laugh and then begin to feel defeated.  We decided to wait until 9 to see if a ranger would arrive, but I really had to urinate, and wasn’t about to do it on the Rez for fear of being arrested, so we drove down the hill off the Rez to a sunny warm spot so I could take a leak.  Right when I zipped up my pants an Indian dude and a chick pulled up in a truck.  She rolled down the passenger window and he said, “Hey, is everything alright?”

I walked the few feet to his truck, leaned in and surely had the look of amazement in my eyes when I saw how inked up they were and all the awesome piercings she had.

“Actually, we were hoping to drive up to Hot Springs Mountain, but there was no one at the ranger station.”

He laughed, “Just drive up to the community center, we just came from there, there are people there that can help you.”

“You can’t miss it, just drive up the hill, you’ll see tractors on the left and the community center on the right”

I went back to our truck.  The three of them had caught most of the conversation.  So back to the Rez!  Once we went past the tractors there was a big sign for the community center.  We drove down a steep little hill and in between the two buildings was a Tribal Police SUV with two cops in it.  We cautiously approached and told our story.  The two rangers/cops couldn’t have been more helpful, friendly, and nice, perhaps the best interaction I’ve ever had with a couple of guys that were armed.  They said to follow them back down to the ranger station.  We paid the $10 cash.  They asked for our licenses.  Ranger Rivers said they take down our names in case we don’t come down off the mountain, he said it’s been know to happen.  They couldn’t find the spare key to the gate, so we got a police escort to the gate.  They unlocked it, let us pass through, and then put the chain back up without locking the lock.  They told us to lock it on our way back.

The Los Coyotes Band of Cahuilla and Cupeno Indians have the largest Reservation in San Diego County with 25,000 acres.  It’s an incredible piece of land and a beautiful drive to the top.  Two-thirds of the way up we entered a mixed conifer forest with Jeffery Pine, White Fir, and Incense Cedar.  There was one dicey stretch of road, but the Tundra handled it in 4hi.

The summit was amazing.  The views spectacular.  You could see Woodson, Iron, Black Mountain, Cowles, Fortuna, San Miguel, Cuyamca, Middle Peak, North Peak, Toro, San Jacinto, San Gorgonio, Santa Rosas, Salton Sea, Santiago, and Baldy.  With the binoculars you could see downtown San Diego skyline, Mount Soledad, and Point Loma. We had the entire mountain to ourselves, not a soul in sight anywhere, then two hours later, as we were all taking in the view to the north one last time, two fighter jets buzzed us, a mere 100 feet way.  It was like they were silently suspended in mid air within our reach.  It was dead silence until they passed and the sound caught up to us.  WOW! 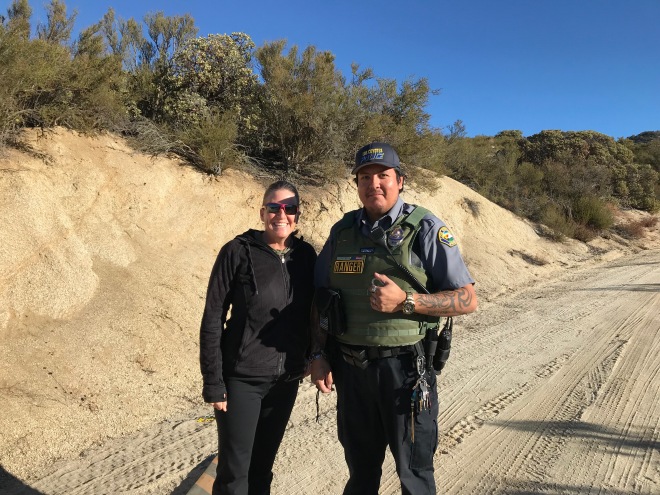 Amelia with Ranger Rivers after he unlocked the gate for us.

The fire lookout tower is not the summit.  It was built in 1942.  It was the third and last tower on Hot Springs Mountain.  R and Amelia in the picture. 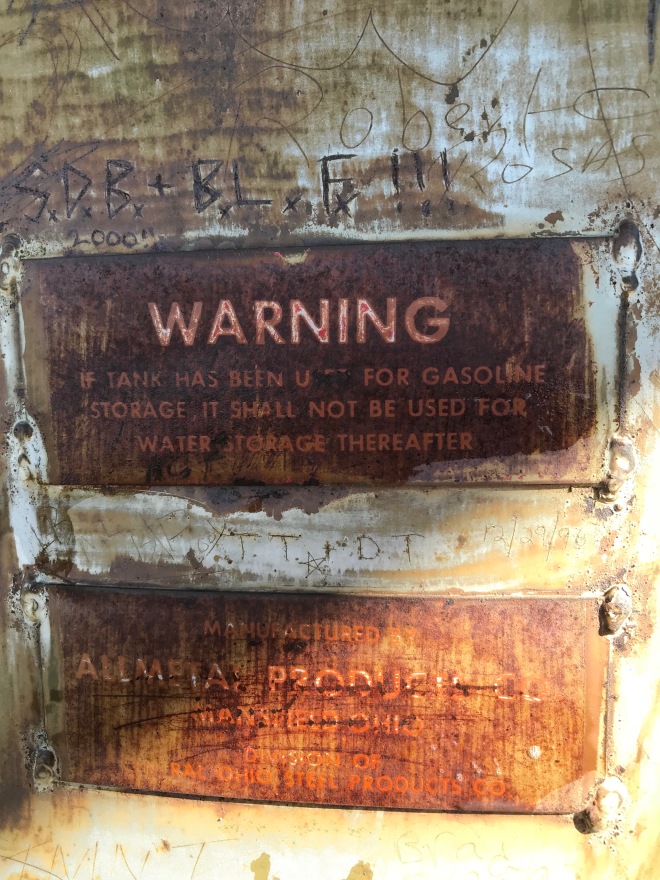 The Tank below the lookout 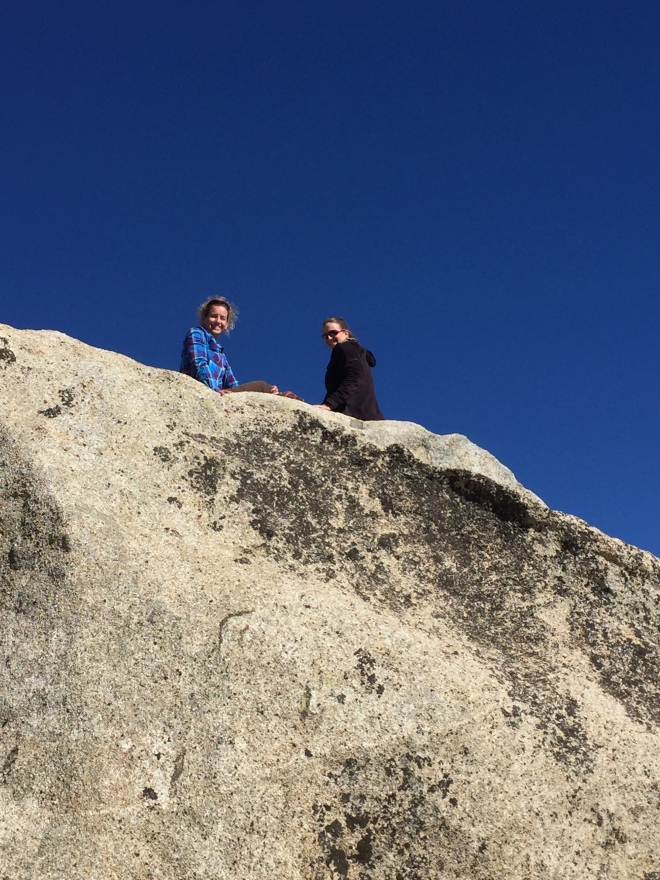 The girls relaxing at a vantage point 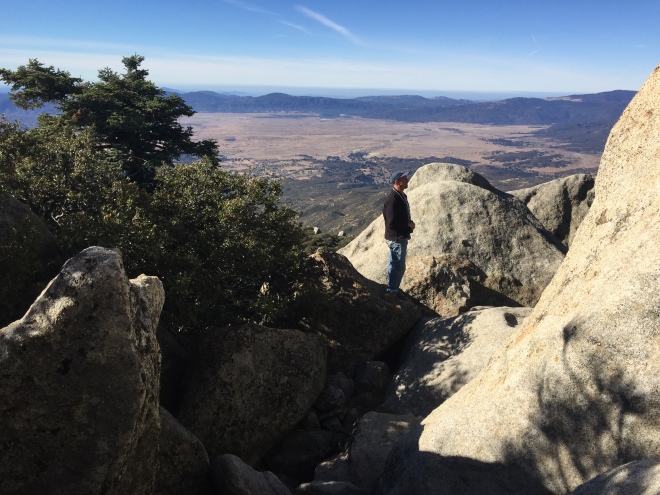 Lake Henshaw and way, way in the distance Black Mountain

In the near distance is Palomar.  The far peak is Santiago in Orange County.

The tall lump in the distance is Cuyamaca, Middle Peak, and North Peak.

A magnificent old growth Eastwood Manzanita. You follow the little orange flags to get to the summit. 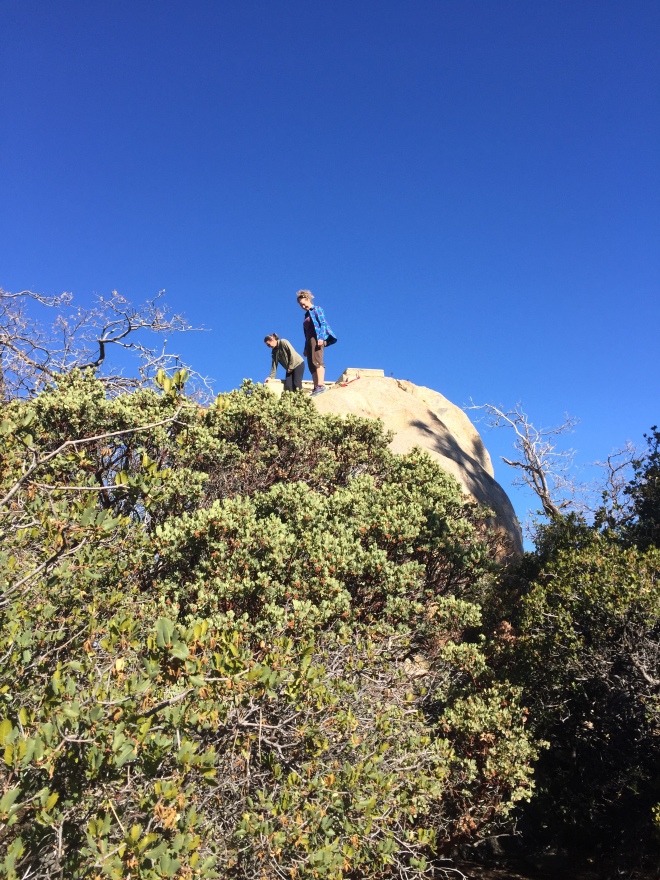 Amelia and Laurie on the summit. There’s a concrete foundation on top which may or may not be part of the original fire outlook in the photo below. 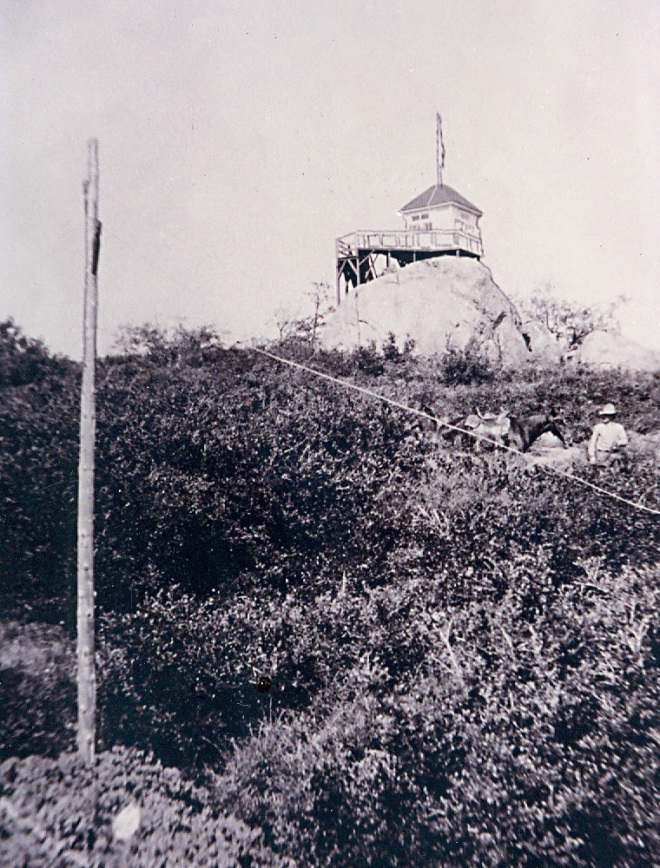 I found this on peakbagging.com  An early photo, date unknown, of the original lookout built in 1912. Thanks to John Robinson for providing this photo.  You can tell it’s the same boulder the girls are standing on. 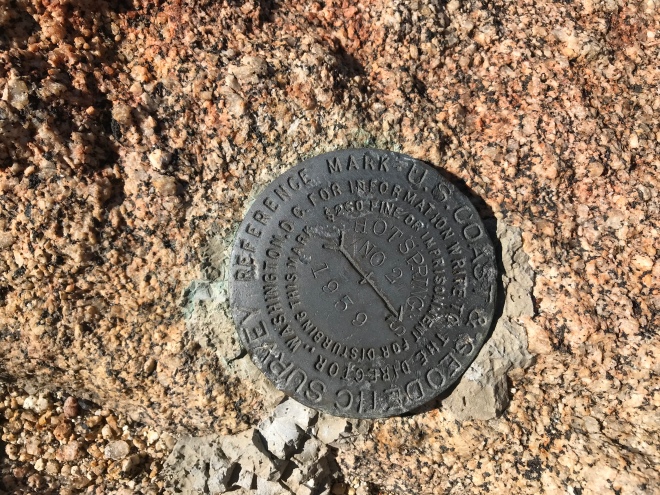 The Benchmark was placed here in 1939.

These straps were definitely needed to get up and down the summit. 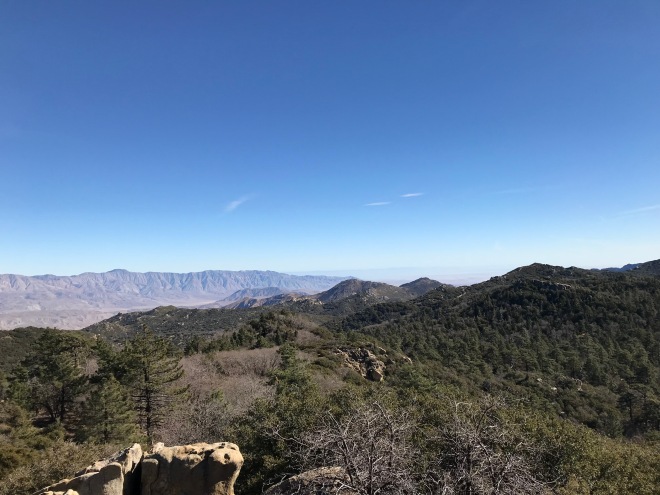 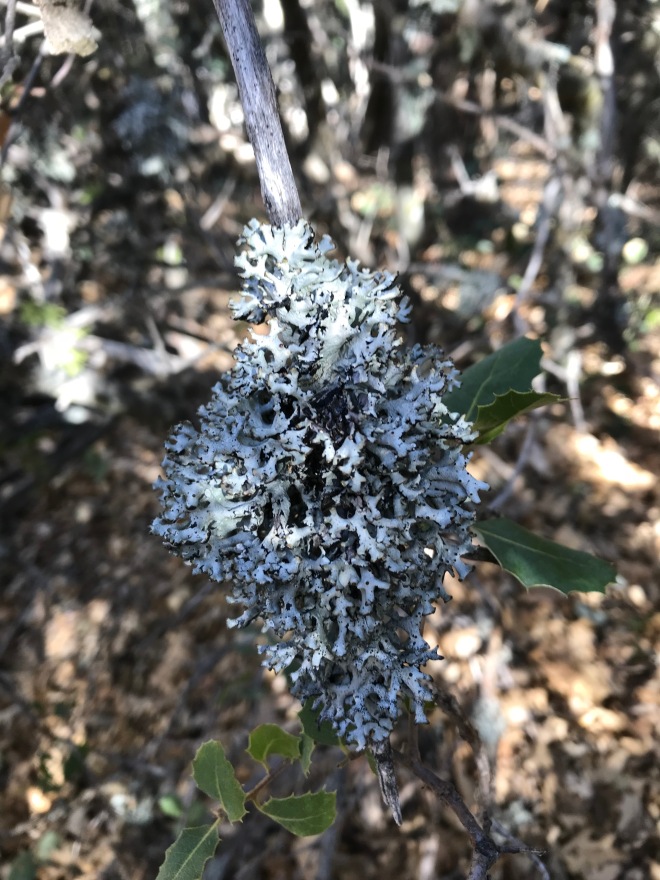 R on the trail leaving the summit 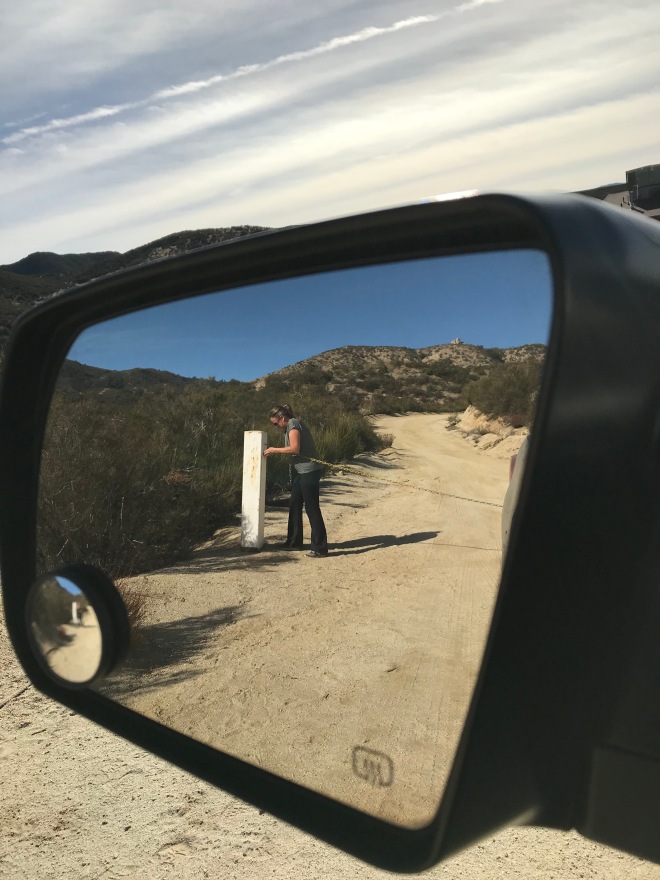 The end of the adventure, Amelia locking the gate