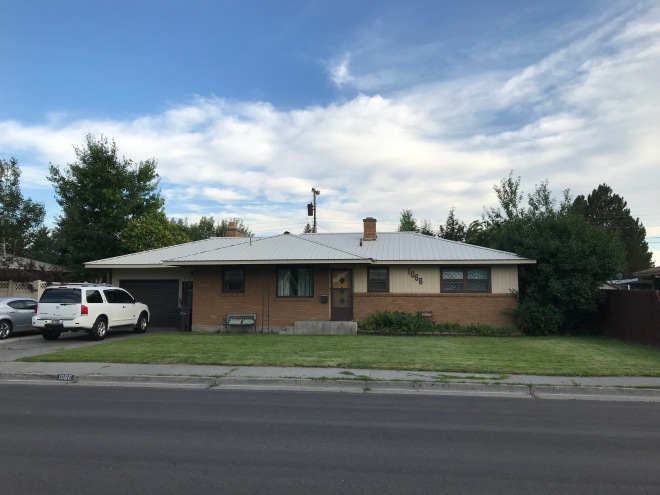 I once lived in this house.

As a child you kind of live in your own world and are oblivious to your surroundings.  If you are lucky you’re just a kid having fun, that was me in Idaho Falls.  We moved there in the middle of 5th grade and left for San Diego at the end of 8th grade, what I consider the formative years.  My recollections of that time are a lot of camping, fishing, hunting, learning to ski, and picking wild asparagus along the irrigation canals.

My Grid Kid football team (just like Pop Warner, but for some reason it was called Grid Kid in Idaho?) got to play in the Southeastern Idaho championship game on AstroTurf at the Idaho State University mini dome in Pocatello.  This is when AstroTurf was a big deal.  Our little league baseball had four teams.  The blue hats, light blue hats, red hats, and green hats.  I kid you not!  I was on the green hats.

I learned to play the trumpet and was even in the marching band.  I also remember the biting cold and having to walk to the school bus stop.  One time we all waited and waited and the bus never showed up, so we went home and school ended up being canceled.  The busses could not start in 20 below zero weather that day.

During the winter, the city would make ice skating rinks on the empty lots in the neighborhoods.  They would just snowplow the snow to form a rink and then the water truck would come by to fill it, it would freeze, and we would skate.

The last time I was in Idaho Falls was 1994, and before that 1978.  In the 44 years since we moved a lot of changes have occurred in the world and Idaho Falls.  My childhood memory of Idaho Falls was not meshing with what I was seeing and feeling.  I guess it’s silly to think it would, but it still brought me down.

It seemed like a clean, neat little Mormon town when we lived there.  What I saw was run down, dirty, and a rough crowd with a bad element.  I’m sure it didn’t help that our first stop was downtown to find a place for dinner.  Driving there we passed payday loan stores, vape shops, smoke shops, liquor stores, and seedy bars with rooms above.  Maybe that stuff was always there, minus the vape shops, but I don’t think so.

After dinner we drove down E 17th St.  The farmer’s field my brother and I used to walk through to go to Albertson’s to eat free donut holes (that’s right free, they hadn’t yet figured out yet they could sell them) was now a mile of strip centers and a Sam’s Club.  Amazingly enough the Albertson’s was still there.

All the old houses on the north side of the street looked worse than their age.  The backstops for the little league fields where still behind the old KID tv/radio building, but you could tell the fields haven’t been used in years.

I called my dad and told him what I saw, he confirmed my thoughts.  Back when we lived there it was a clean, neat little Mormon town.  I had plans to see all my old haunts but after one evening I saw enough, so we stayed around the Ririe area.  And I worked on getting my head screwed back on.  We didn’t go back to IF, we just drove through on our way to the next stop.

Sara chilling while we were setting up

We did a short ride at this trailhead.

This part of Idaho is not known for mountain biking trails.  There’s a lot of shared use with ATV’s.

Osprey are a dime a dozen along the Snake River.  So many, that special platforms are built for their nests.  This couple was making a colorful statement.

Where I learned to ski, Kelly Canyon Ski Resort.  I can’t believe they are still in business!  It hasn’t changed a bit, still a rinky dink four lift ski area, heck still the same old slow chairs.  I guess 40 minutes from Idaho Falls is what keeps them in business.

An evening stroll on one of the docks at Ririe Reservoir.

Juniper Campground, a Bonneville County Park.  It was really quite nice, full hook ups, spacious and no mosquitoes.  It was also quiet mid week, but apparently it fills up during the weekend with loud water enthusiasts using Ririe Reservoir.

5 thoughts on “I once lived in Idaho Falls”