Salida is a cool little town. My first impression was: it’s like a beach community because of all the people riding around on their townies and beach cruisers. It has a different, better vibe than most mountain towns. The Arkansas River is the center of attention and all the activities that go with it. Mountain biking is also big. The town has a population of around 5,300 and three bike shops!

Way back in December of 2014 we met a couple at Catalina State Park in Arizona from Salida, Tim and Lisa. Of course Amelia has kept in touch with Lisa. The first thing we did in Salida was visit her at their house. Amelia really wanted to see her work studio and figure out when we could meet up with them. One of the memorable lines from Lisa was, “The deer aren’t cute. They are pests.” We certainly saw a lot of them, especially where there was green grass and shade. It was so common we didn’t even bother to take any pictures. I guess the cuteness wears off when they are tearing up your yard.

Our first two rides were unguided with us relying on the Trailforks app and a bike shop map. It seemed like all we did was climb and go the wrong direction. We did not have as much fun as we were expecting. I kept saying I’m going to reserve judgment until the end of the trip, but I certainly wasn’t seeing the goods our friends in San Diego had been hyping. Then I hooked up with Tim for a Saturday ride. Wow, nothing like having a local guide you around. The hype was real. This place is fun! On Sunday Amelia joined Tim and me for a shuttle ride. I drew a little blood, but the route was awesome. Thank you Tim!

Originally we booked five nights at Mt Shavano KOA, ten miles west of Salida. What a dump. You’d think we’d be happy because it was virtually empty, but the emptiness gave the park a creepy feel. After three nights we bailed and went to Four Season RV Park on the east side of Salida.

What’s a trip in the mountains without unhitching or hitching up at least once in a deluge? That’s what we experienced when we unhitched at Four Seasons. We got soaking wet, but we were happy to be out of Charlie Manson’s campground. (That’s what I was calling the KOA. Amelia didn’t like me saying that). And we had a nice view of the Arkansas River twenty yards from our bedroom window.

The KOA. It looks nice in the picture, but it wasn’t. 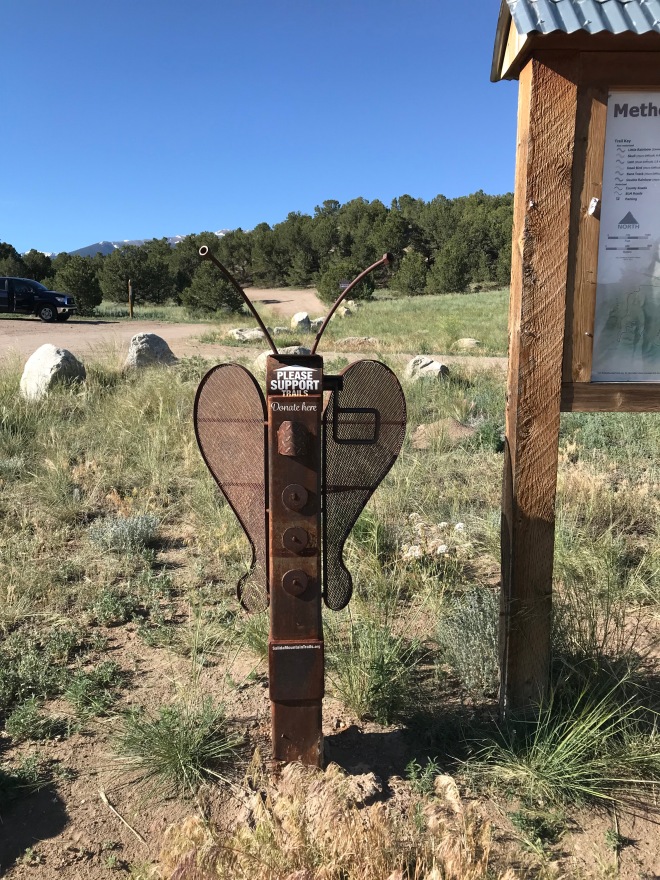 Cool butterfly donation box at one of the Methodist Mountain Trailheads. 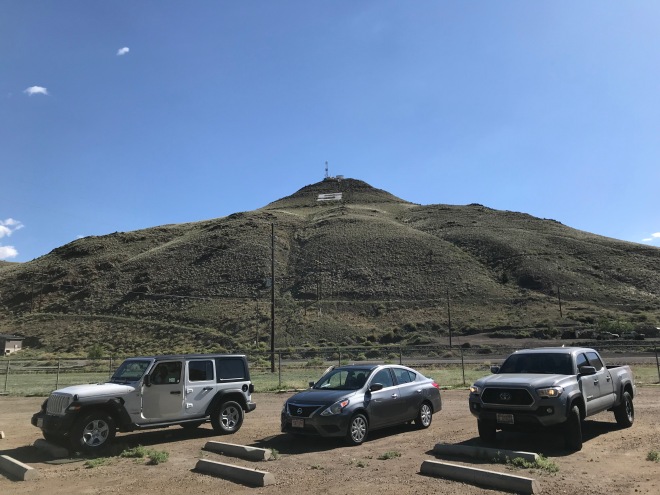 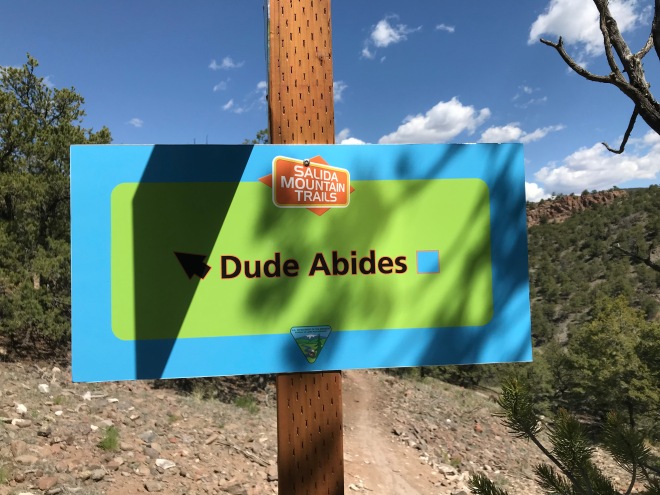 Amelia on one of the exposed trails.

Get off the table!  On Saturday while I was riding with Tim, Amelia was getting the Airstream ready for our short drive to Four Seasons.  So the table was cleared off of the usual stuff like fruit bowl and flower vase.  When she got out of the shower, there was the Puggle.  There’s no denying her the morning sun.

Our view of the Arkansas River. 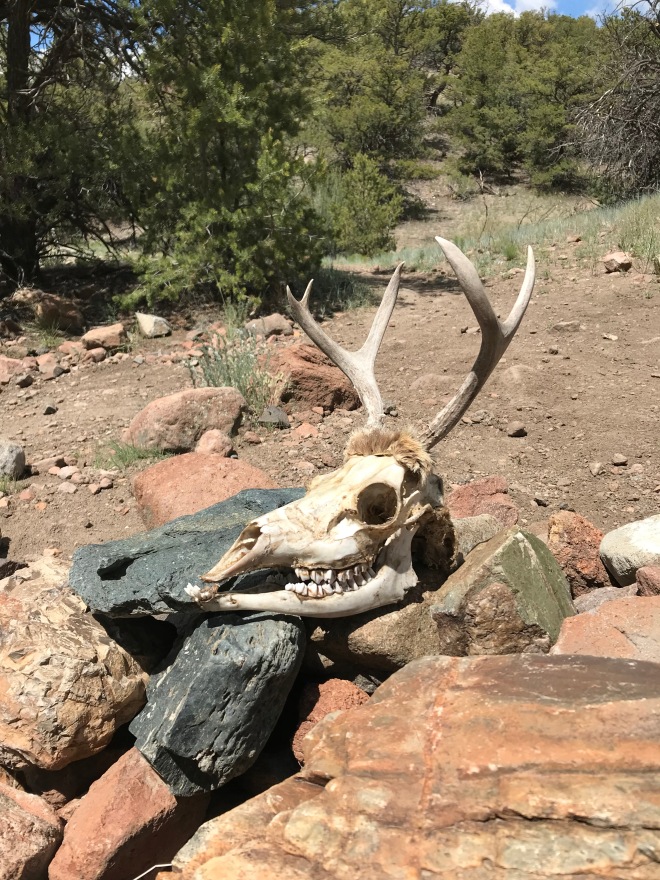 This pest didn’t make it through the winter. Now he’s a greeter at a trail intersection. 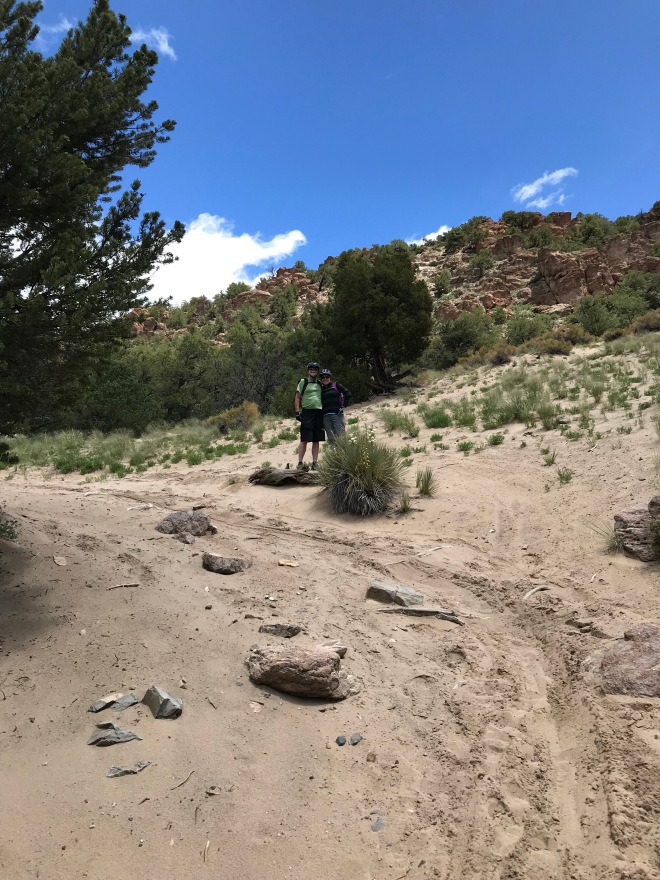 Tim and Amelia on the Sand Dune Trail