Two months later we are still sad without Sara.  She was so much a part of our Airstream adventures.  Granted everything is easier now, but she was such a joy.  This being our first trip since she’s died was emotional.

Tradition is we go out to Borrego Springs on President’s weekend.  The weather typically is nice and it’s a short easy trip.  As we were driving into Borrego Valley we both commented how much we still like it out here.  It just leaves us with a peaceful feeling.

At 1pm, as we drove past Peg Leg campground we couldn’t believe how crowded it was.  At the stop sign, we turned left on to S-22 and were just astounded by the crowds across the street in the open area.  There was even an Airstream; usually it’s just the toy hauler crowd since they can ride there.  We made the left onto Rockhouse Trail, up over the small rise, and it was like we were smacked in the face.  Uh-oh, something was not right. The place was completely empty, save for one guy. We drove a little further and there was the answer.  Private Property. Unauthorized Persons Prohibited, Unauthorized Vehicles Removed signs at all the turnoffs where the boondocking has always been.  I guess now it’s where it used to be.

F@*K! Now what.  I figured for starters I’d jump on the singlespeed, ride over and go talk to the one guy.  He wasn’t any help and was kind of a dick.

Decisions…what do we do? Where do we go?  The last thing we dreamed of was this curveball.  While we were having a typical married couple conversation about the predicament, Amelia spotted a yellowish orange State Park Boundary sign behind us back towards S-22.  Ah ha! We will outsmart them. We will set up on State Park Land.  So we did.  And felt really good about our smarts, or at least I did. 😁

A couple of hours later we went out to look at the blooms.  It isn’t a super bloom this year, but there is some beauty to be seen.  A huge problem in the Borrego Valley is the invasive Sahara Mustard.  I do not know what the solution is, but the plant is literally choking out the natives.  The stuff is everywhere.

Then we went to Carmelita’s for a nice early bird Valentine’s Day dinner.  It was a glimpse into our future.  The place was full of couples in their late 60s and 70s.  All the guys were in Costco cargo shorts.

The next morning there were four more RV’s, in the blatant, no way could you explain  your way out of it, Private Property area.  Dodos.  We had breakfast, and took off in the truck for our morning hike.

We came back and were finishing up lunch in the Airstream when I saw a Park Ranger Law Enforcement Officer making a beeline towards us in his truck. I went out to greet him, told him my story about being a good guy and clearly being in State Park Boundary, unlike all those other dodos.  He understood my logic, but said the problem was I trespassed across private property to get to our spot.  So even though I was a good guy, we were still being evicted.

Buzzkill. We pulled up stakes, hitched up, and went a couple miles east on S-22 to where the Park Ranger said it was all right to camp.  There were five other RV’s.  Not a glamorous site, and literally twenty yards from busy S-22.  We decided to stayed hitched up, so the next morning we could just drive home.

The story behind the Rockhouse/Dry Clark Lake boondocking area being closed is the property owner finally just had enough of people leaving trash, broken bottles, and toilet paper all over.  I can’t blame the guy, if it was my land I would do the same.  It’s the end of an era.

The end of an era.

All wildlife and plants protected, but not us; we were evicted.

Our last time at Rockhouse Trail. 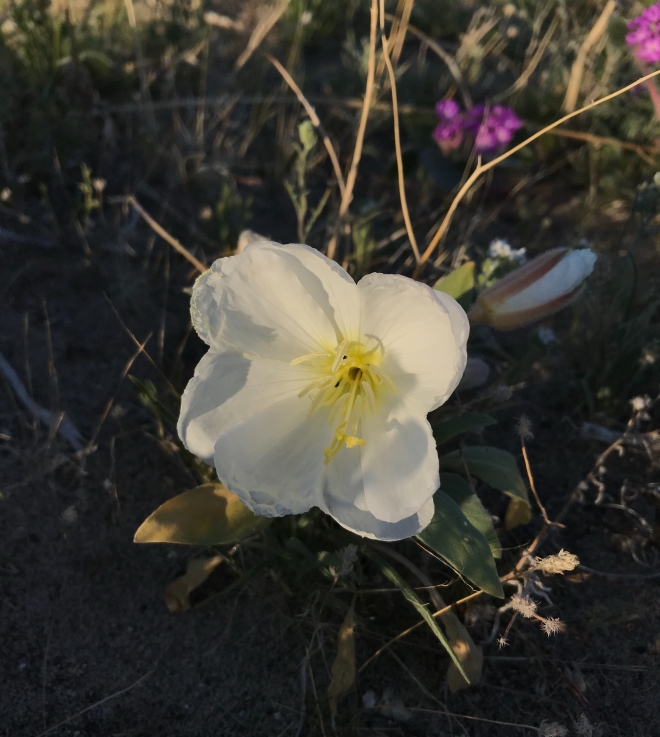 Amelia taking in the best part of the day and holding a mylar ballon she picked up. 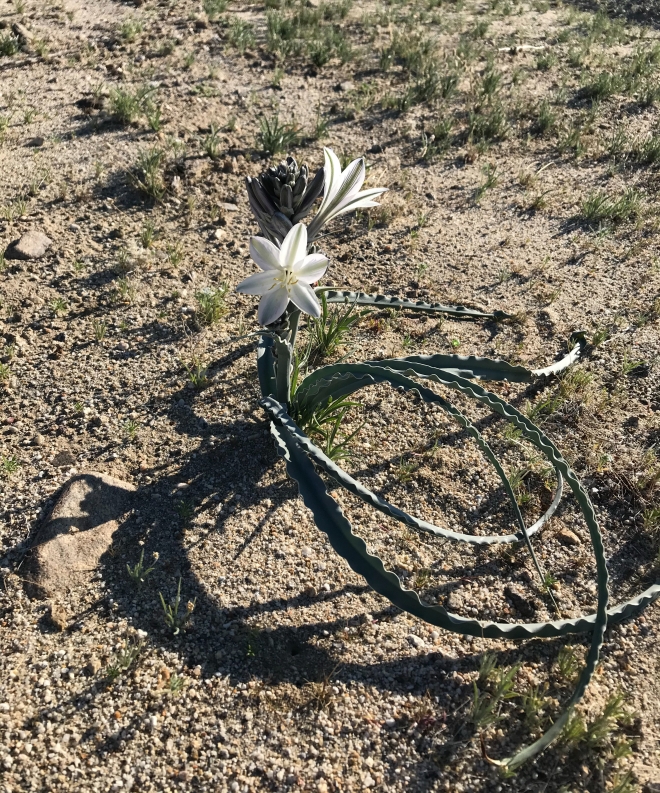 Ocotillo, Airstream, and a half moon

My wife saving the world, picking up trash. That’s her new thing.

My buddy, Acomb, and his chick, Lynn, and their companion, Sammy, came out for a two hour whirlwind visit and dinner.

Acomb made these delicious swordfish, hanger meat, onion, mushroom, yellow squash, and orange bell pepper kabobs.  I grilled them.  It went great with the bottle of 2015 Failla Pinot Noir he also brought. 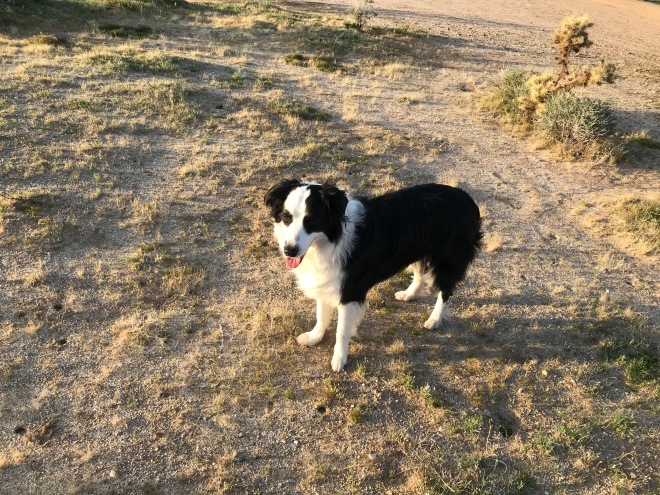 Our Museum Palo Verde is having a spectacular year! This hasn’t always been the case.
Another beautiful plant that has magically appeared in our drought tolerant yard. I’m not certain, but it might be a Prairie Flax.
Yellow-faced bumble bee on Cleveland Sage. The pics appear blurry because it’s wings are flapping.
Loving our Matilija poppies 😊.
Backyard Sages: 1)Purple 2)White 3)Germander 4)Cleveland 5)Black
Front yard cactus flowers.
Join 144 other followers