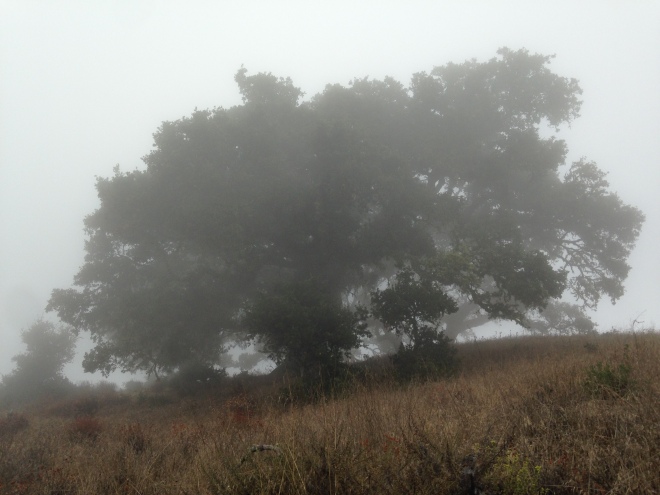 California’s central coast is a beautiful stretch of land.  It’s one of many must see areas in this amazing state.  If you live in San Diego, the problem is you have to drive through LA to get to it.  We left before 6am on a Sunday morning and were able to get through it fairly unscathed.

Fires and smoky skies are part of summer now in the west, especially in California.  The huge Soberanes Fire in Monterey County was drifting smoke as far south as San Luis Obispo.  I guess we kind of lucked out only having smoky skies four out of eight days.  It was never bad enough where you had to stay indoors, but you could see and smell it.  And it sure ruined the beautiful vistas.

When I was in West Virginia people were asking me about the drought and fires.  Living in a state that’s damp, humid, and the vegetation is always green, they couldn’t comprehend the drought and large swaths of land burning out of control for weeks on end. Unfortunately, they recently experienced a devastating flood that took 23 lives and ruined over a 1,000 homes.  If I was feeling like a smart ass I’d say something snarky like, “Climate change is just a hoax made up by the Chinese.”  But death and destruction really aren’t joking matters.

San Luis Obispo or SLO as it is referred to in SoCal, is a nice college town with some good mountain bike riding.  I never knew this until this trip, but Obispo means Bishop in Spanish.  We were here a couple of years ago, and will probably be back again in a couple of years.

Denise joined us in San Simeon, home of the famous Hearst Castle.  If you are around my age or older I’m sure you remember the Patty Hearst saga from the mid 70s.  She’s 62 now, living in Connecticut, and is a grandmother.  The marriage to her former bodyguard, Bernard Shaw lasted until his death in 2013.  Crazy, huh?

Anyways, unfortunately there’s not any mountain biking in the San Simeon area.  What a shame because the terrain is perfect.  Odds are it could be quite a while until we return, but then again one never knows. 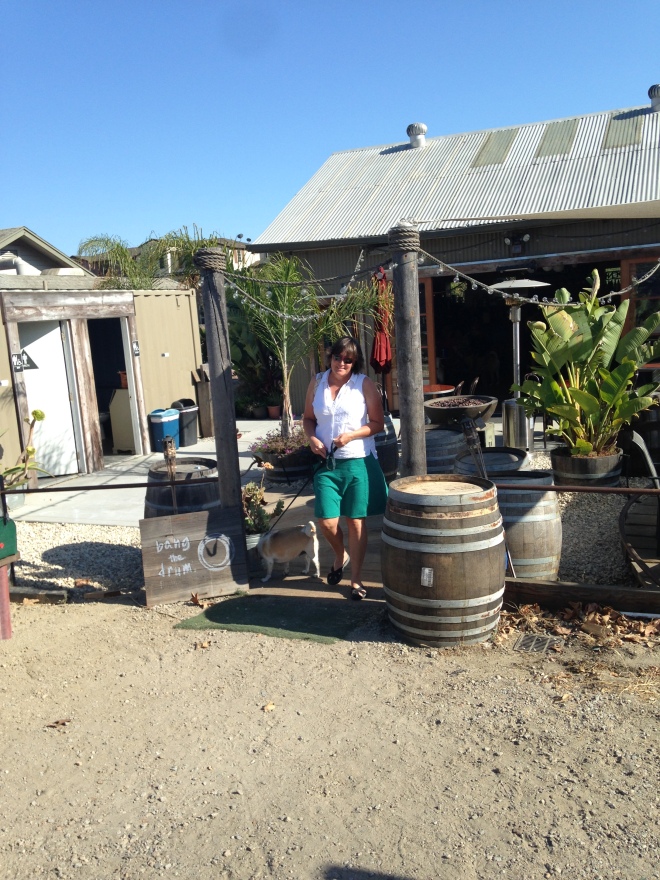 Our first evening in SLO we went to Bang the Drum Brewery.  They tout themselves as the smallest brewery on the central coast.  It had a funky vibe & better than average beer.  The next morning I couldn’t find my wallet.  I had a panic moment and canceled the two credit cards.  We figured I must’ve lost the wallet in the campground showers or the brewery.  I scoured the showers, talked to the hosts, no wallet.  The brewery wasn’t open for hours, but I was able to leave a voice message, so I did.  Two hours later they called back, sure enough they had my wallet!  I swear I only had two beers.  We picked it up hours later when they opened.  All my cash and everything was still there.  I love Bang the Drum. 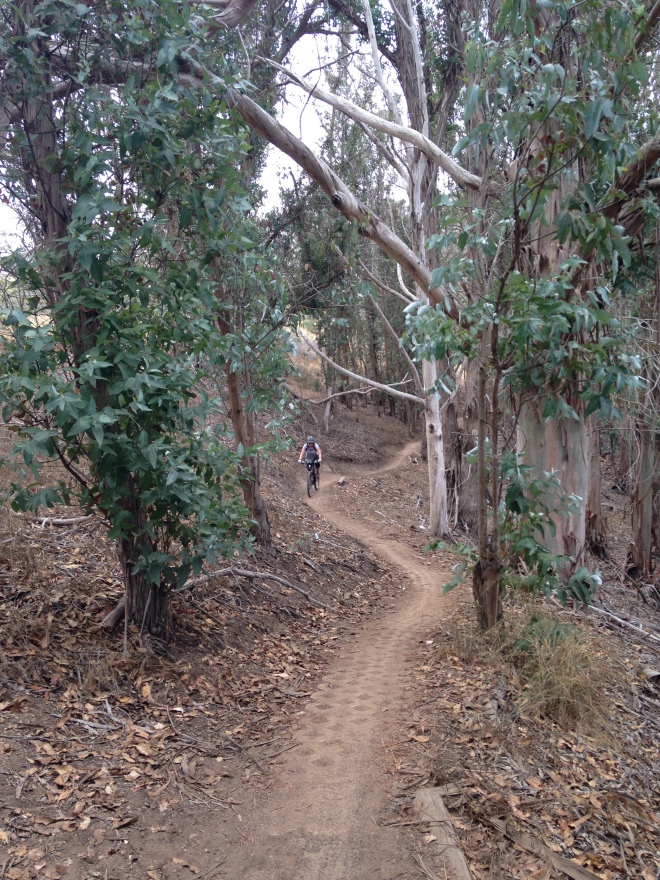 Thankfully Amelia is back in the saddle!  This is the Hazard Peak trail in MDO. 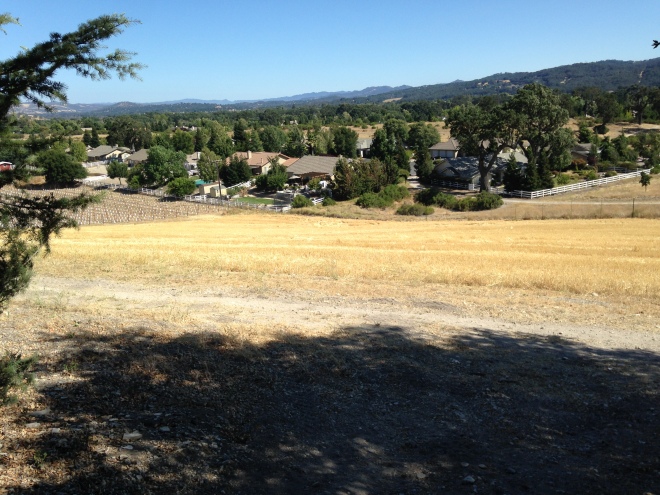 Our friends Mike & Chris’ property in Templeton.  They just moved to Templeton and are going to build their dream home on this lot.  We’ve been hearing about the land for as long as we’ve known them.  And of course in their modest and understated way they completely under hyped how awesome it is. 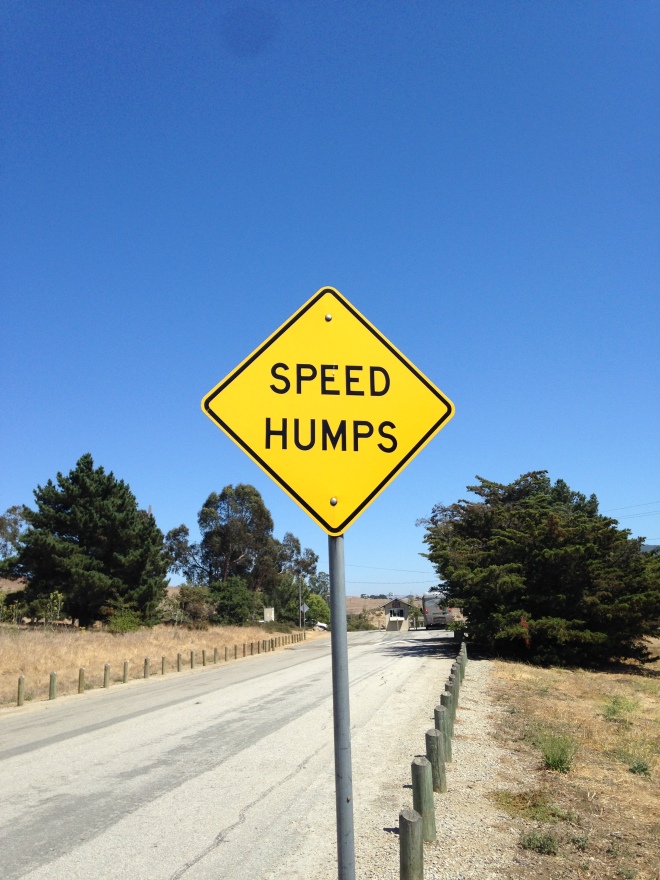 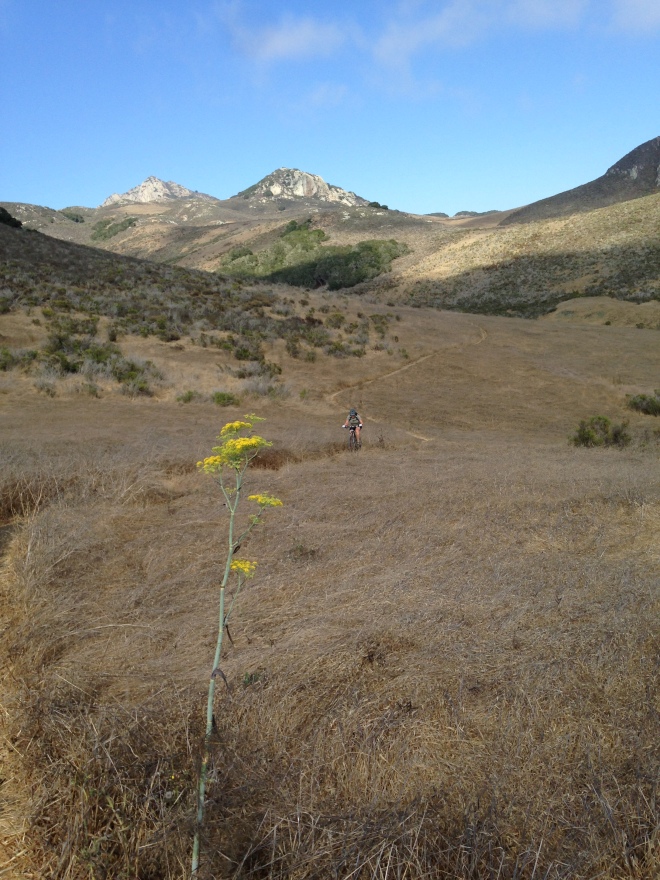 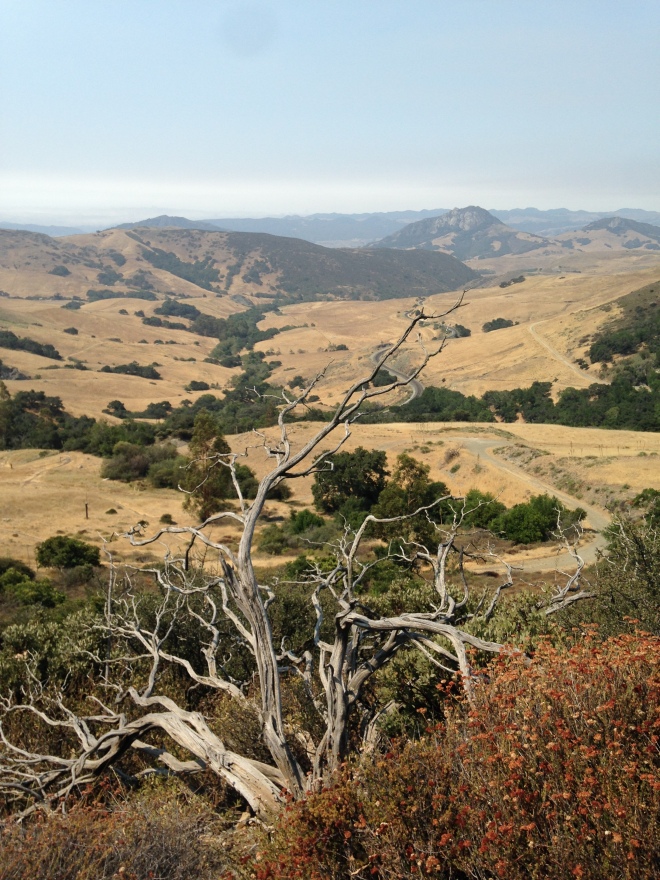 The view a third of the way up West Cuesta Ridge. 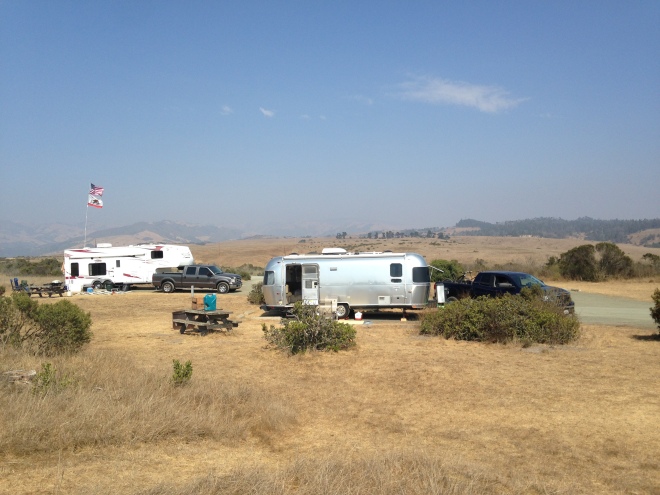 Our spot at Washburn Primitive Camp- San Simeon State Park.  For one day we had Flag Flying Fifth Wheel Fred as our neighbor. 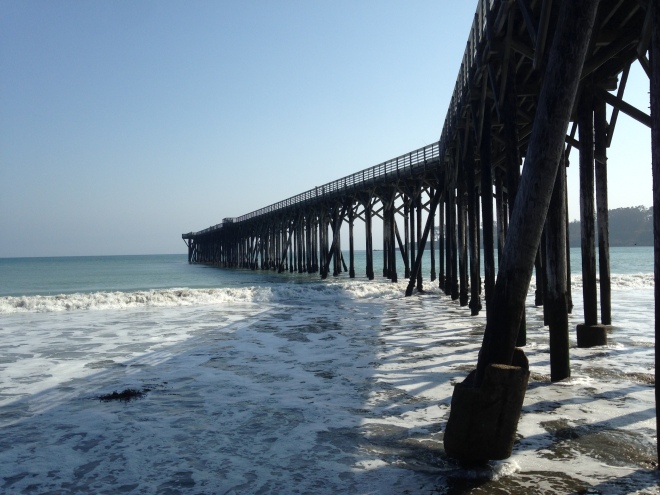 A chilly and windy, but clear day. 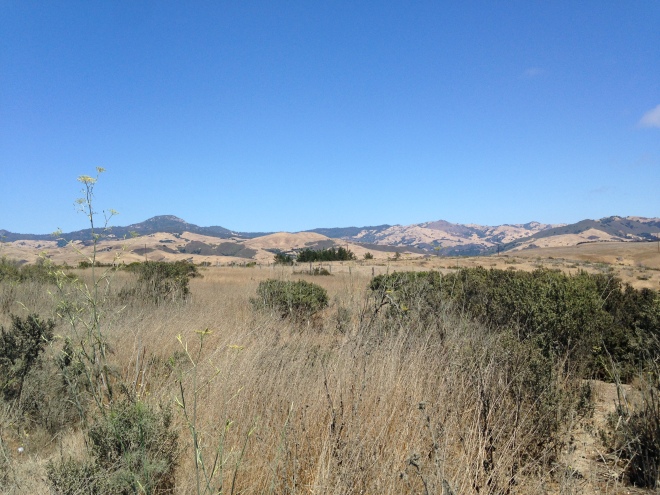 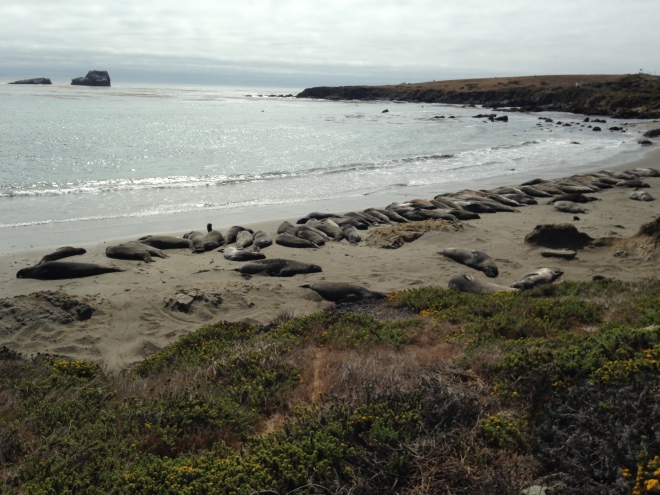 Elephant seals at Piedras Blancas – only the adult males are here this time of the year.  It was a first for us.  We couldn’t get over how huge they are.  Up to 16 feet and as much as 5,000 pounds. 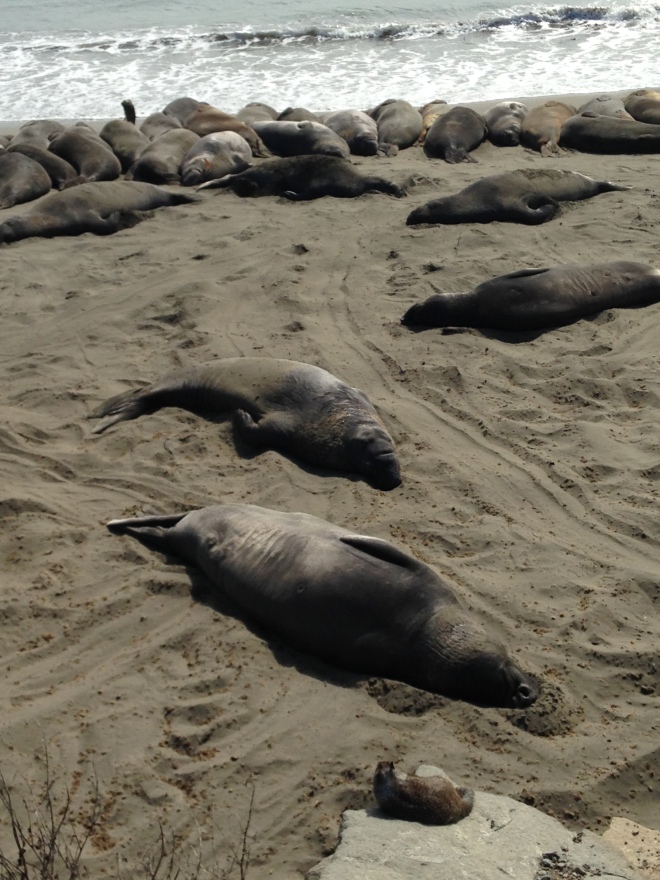 They were just laying around, occasionally flipping sand on themselves as protection from the sun when it got warm. 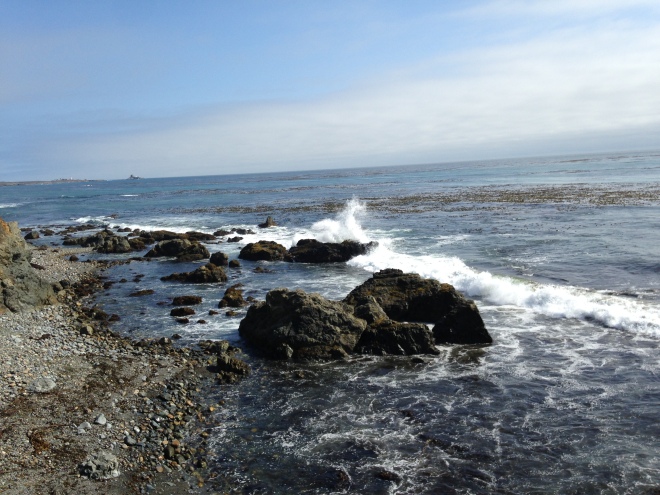 The little white speck on the upper left is the Piedras Blanca Light Station, more on that in a moment. 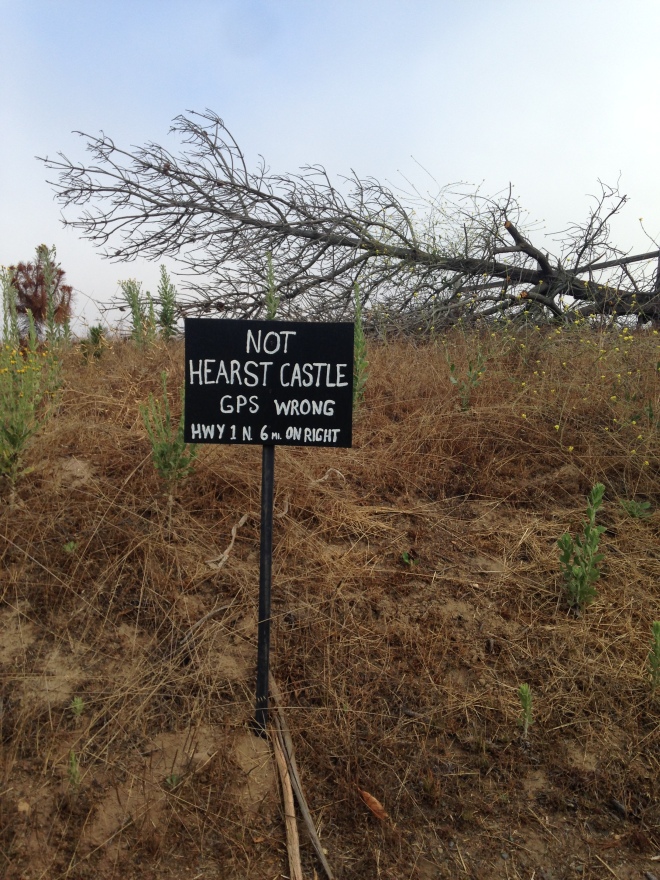 Hate it when that happens. 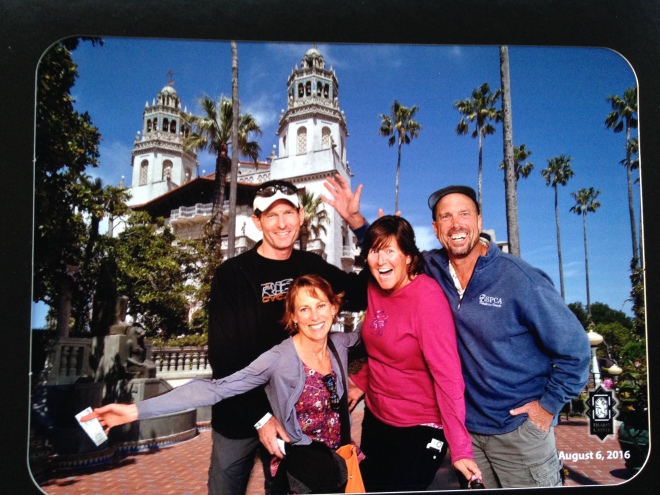 On Saturday we went full tourist mode and visited Hearst Castle with Mike and Chris.  I even got suckered into buying this photo. 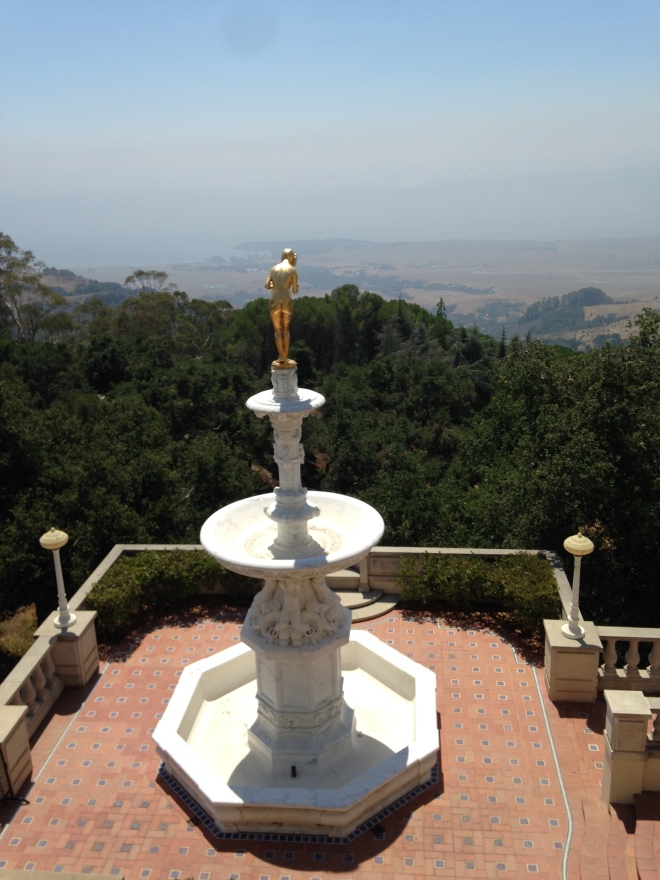 Naked Golden Girl at Hearst Castle looking west at what is usually a jaw dropping spectacular view of the Pacific Ocean, unfortunately for us this was the smokiest day. 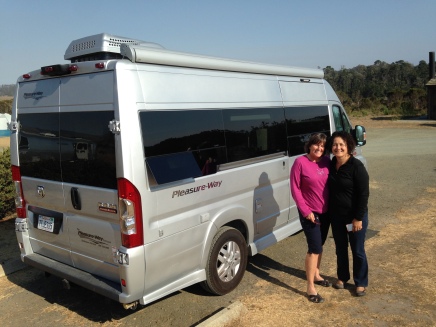 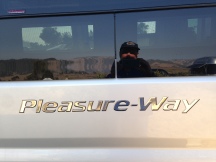 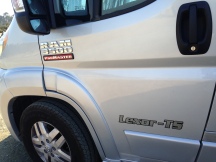 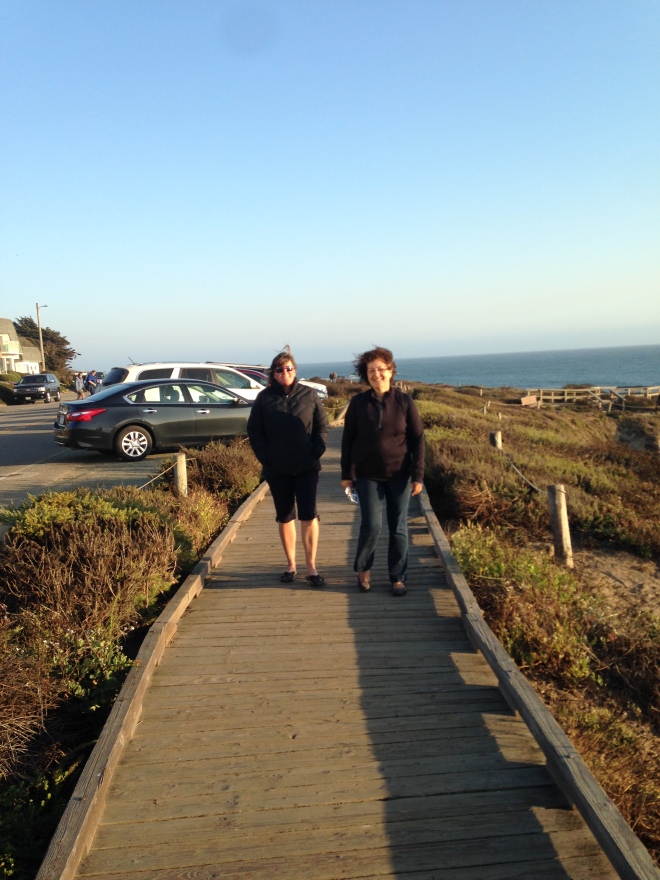 A chilly and windy, post dinner walk on the boardwalk in Cambria.  If you are in the area definitely stop at Sea Chest for dinner.  Cash only, my kind of place. 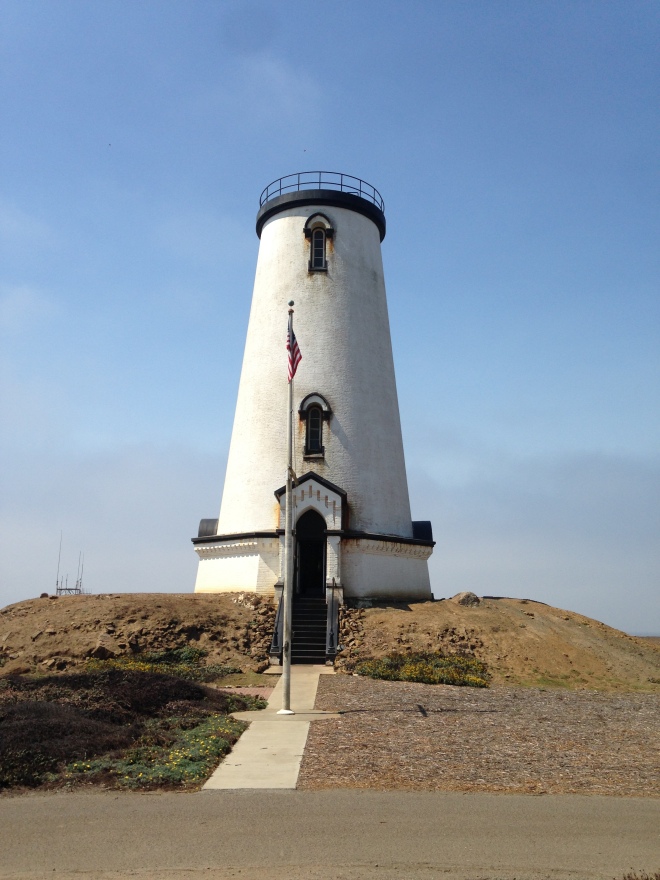 Piedras Blancas Light Station.  What a great tour, much better than Hearst Castle.  The light house is just a small part of the tour.  On the nice walk around the grounds we saw all the typical seabirds and a Peregrine Falcon, Elephant Seals, Harbor Seals, Sea Lions, and Sea Otters.  There’s less than 3,000 Sea Otters in California, so seeing them was a score.  The BLM and all the volunteers do a wonderful job running this property. 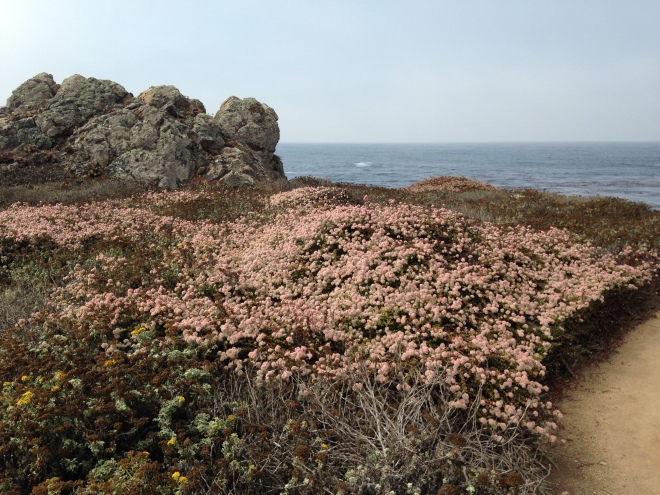 Dune Buckwheat on the Piedras Blancas Light Station property.  The entire property used to be covered in ice plant.  They ripped it all out and put in natives. 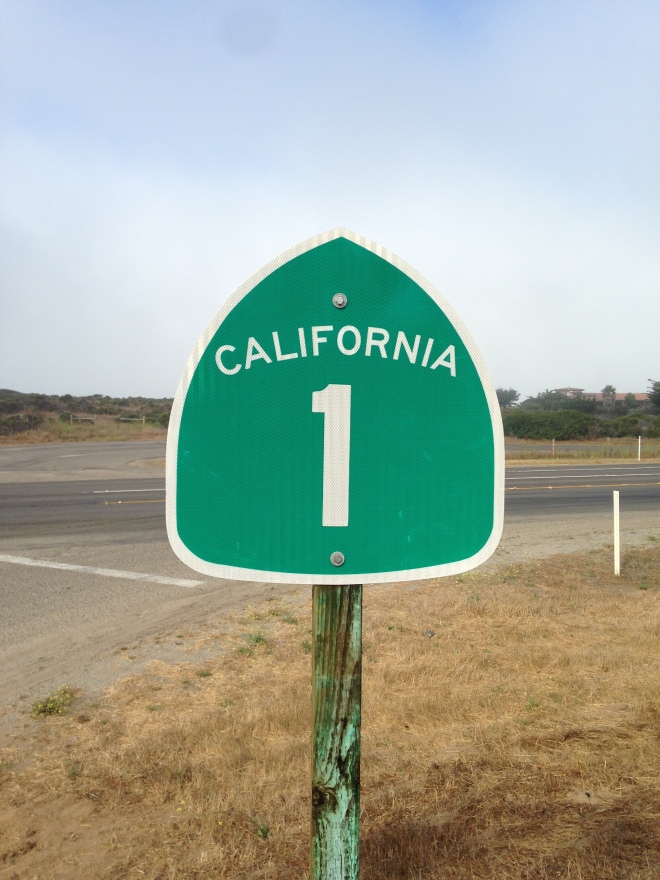