The view from Bright Angel Point.

We knew the North Rim was going to be fantastic, because the South Rim was, and come on, it’s the Grand Canyon!  But the big surprise was the drive from Jacob Lake to the campground entrance.  Once you get a few miles in, there are multiple huge meadows on both sides of the road.  Green grass, flower fields, and a mixed conifer forest with Blue Spruce, White Fir, Ponderosa, Doug Fir, and Quaking Aspen.

Visiting one of the popular National Parks is kind of like a United Nations field trip.  You hear all kinds of languages.  It’s really quite interesting.  We heard German, Dutch, French, Japanese, and Spanish being spoken.  And those are just the ones we were able to ID.  Of course Amelia busted out her Spanish and chatted up a group.

Unfortunately there were some ugly Americans in the campground.  Three rich families traveling together in their Cruise America RV rentals.  Two on one side of the road, one on the other.  Constantly yelling back and forth to each other; the kids were little shits, and the parents worse.  Just really annoying oblivious people.  They left Monday morning and the campground turned into a serene paradise.

The Grand Canyon is ginormous.  What a lot of people don’t realize is part of it isn’t in the National Park, but instead the National Forest, and on the North Rim there are places you can camp right on the rim.  That’s where we rode the Rainbow Rim Trail on our first day.  It was an hour drive to get there from the campground, mostly on dirt roads, but totally worth it.  The next day we did a strenuous 9.4 mile round trip, 3,000 plus feet drop in elevation hike down into the Grand Canyon to Roaring Springs.  It’s always a whole different perspective being in it and looking up as opposed to just viewing it from the top down.  On our last day we put on our tourists hats and drove the Cape Royal Road to all the view points.

My only negative comment, and I’m sure “they” have their reasons, but National Parks aren’t exactly pet friendly.  Not that Sara is a hiking dog, but it still puts a limit on what we can do with her.

One of the meadows on the drive in. 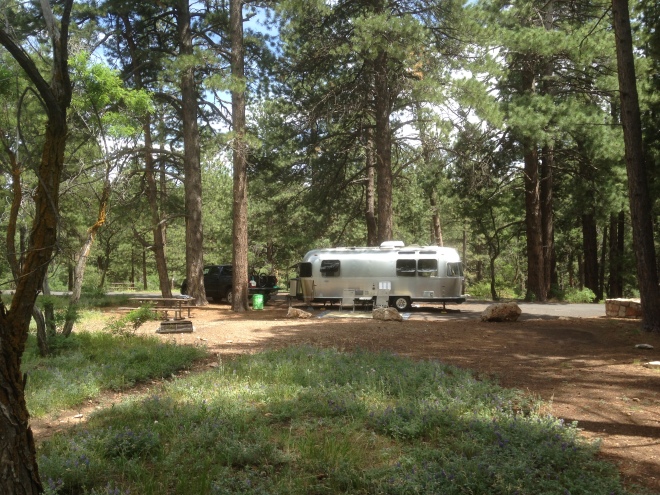 Beautiful campground, but between the afternoon clouds and pine trees our solar panel really struggled.  It struggled so much that we even pondered if we should invest in a generator.

This viewpoint was less than a 5 minute walk from our campsite. 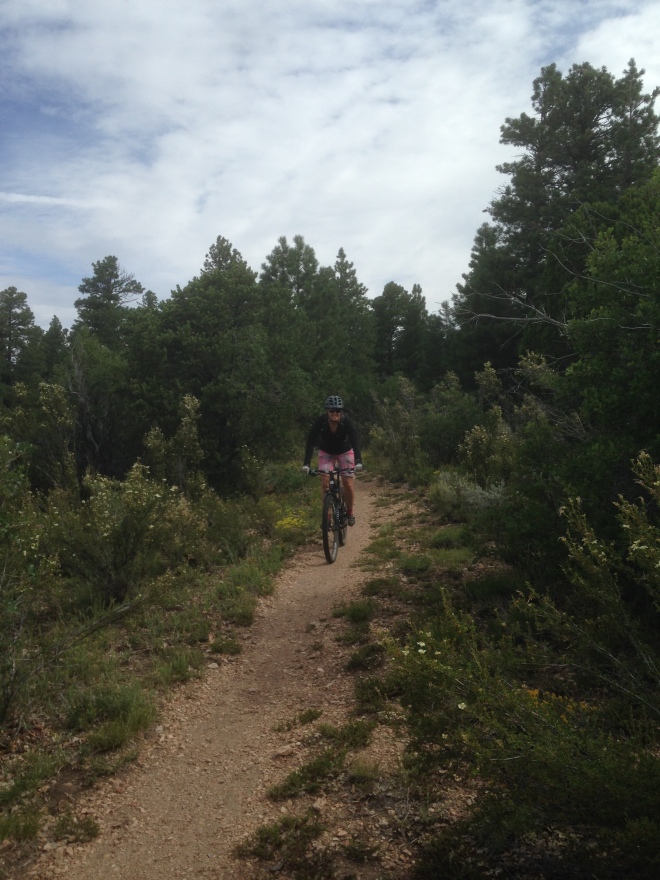 Parissawampitts Point on the Rainbow Rim Trail.  Our neighbor thought it looked like a fake movie backdrop.  This is the real deal.  Standing at a Grand Canyon viewpoint is amazing.  Ripping around a corner on a mountain bike and having the view in your peripheral vision is mind blowing.

Another pic of the Rainbow Rim Trail. 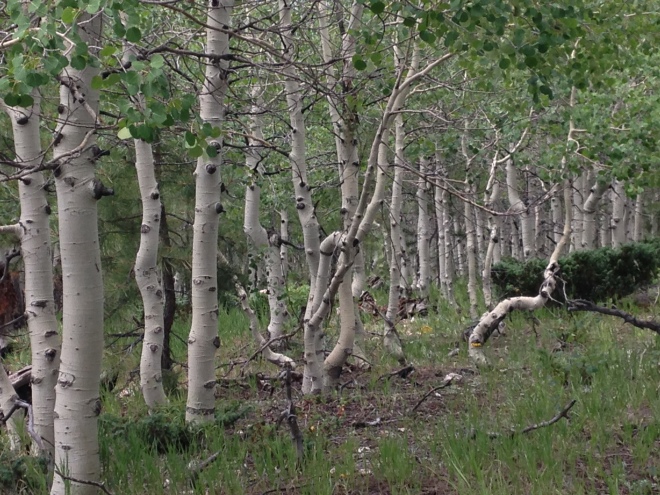 In 1984 a thunder downburst caused a timber blowdown in the Kaibab National Forest.  200 acres were completely destroyed.  This is some of the replant and why it seems unnaturally in rows.  This is off of the FS22 road on the way out to Rainbow Rim. 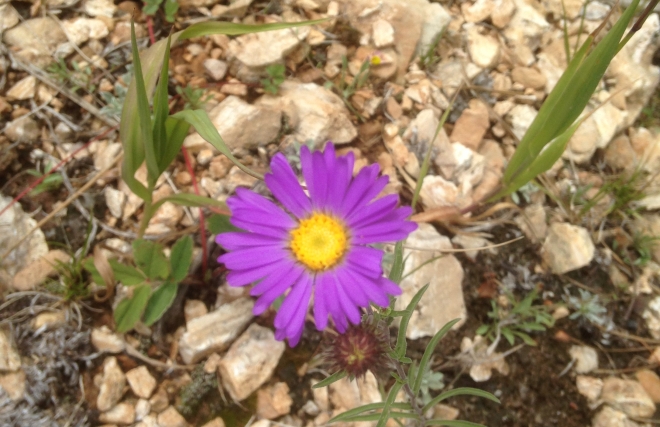 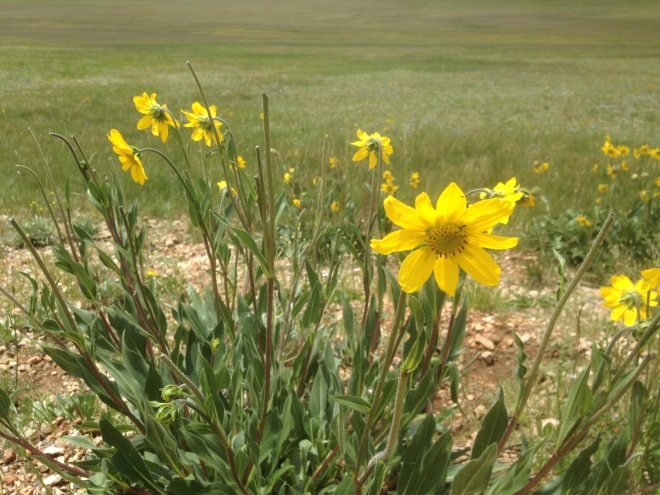 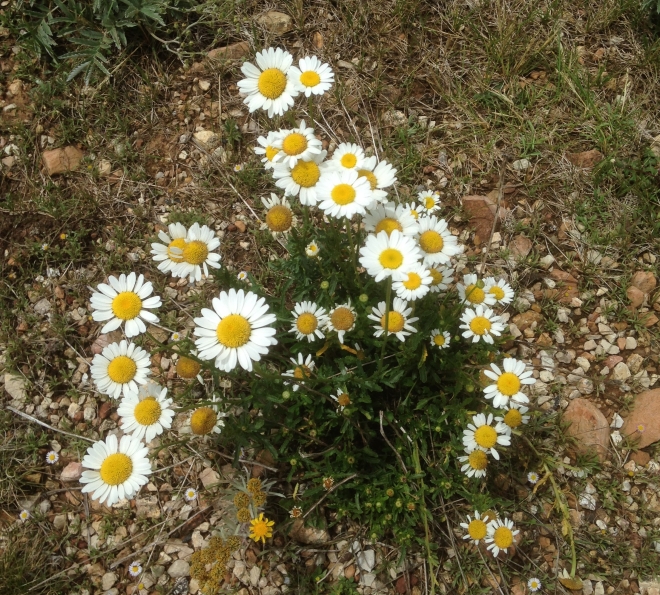 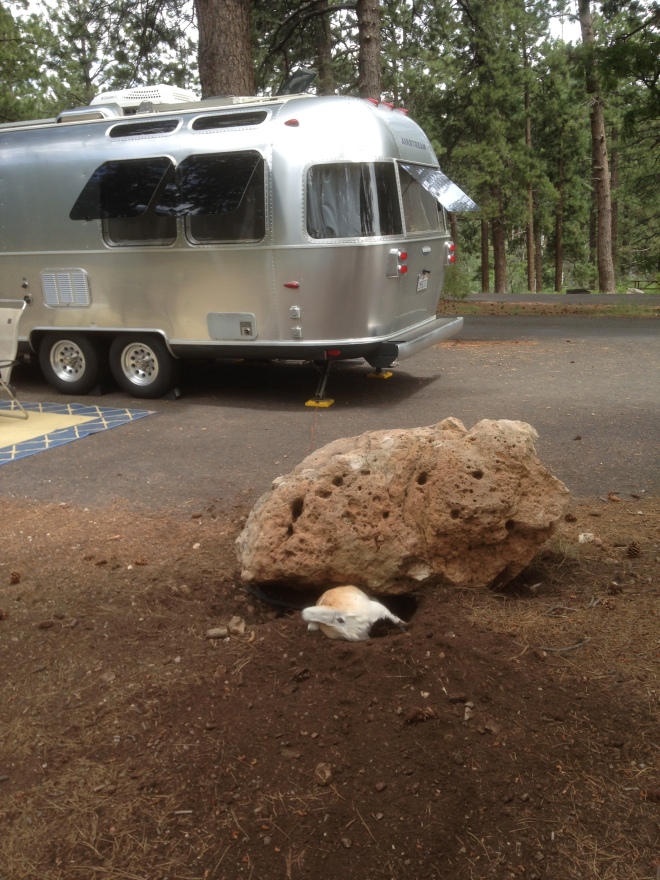 This is the Beagle in Sara.  She’s trying to dig a hole to China.

I know it’s blurry, but I just had to include it.  Sometimes I just love campgrounds.  This is post downpour and I got a kick out of this couple in their matching clothes, including Hawaiian Juice jackets.  Amelia said something like, “I don’t see why you think it’s so funny.  Look at us we, look like bobbsey twins.  Same black Columbia jackets, khaki shorts, and sandals.”  She had a point!

On our way down to Roaring Springs we had to pass two mule trains.  Thankfully the mules only go two miles down to the Supai Tunnel.  There was fresh mule shit and puddles of urine everywhere.  Amelia was disgusted.

You can see Redwall Bridge in this pic and the trail beyond it. 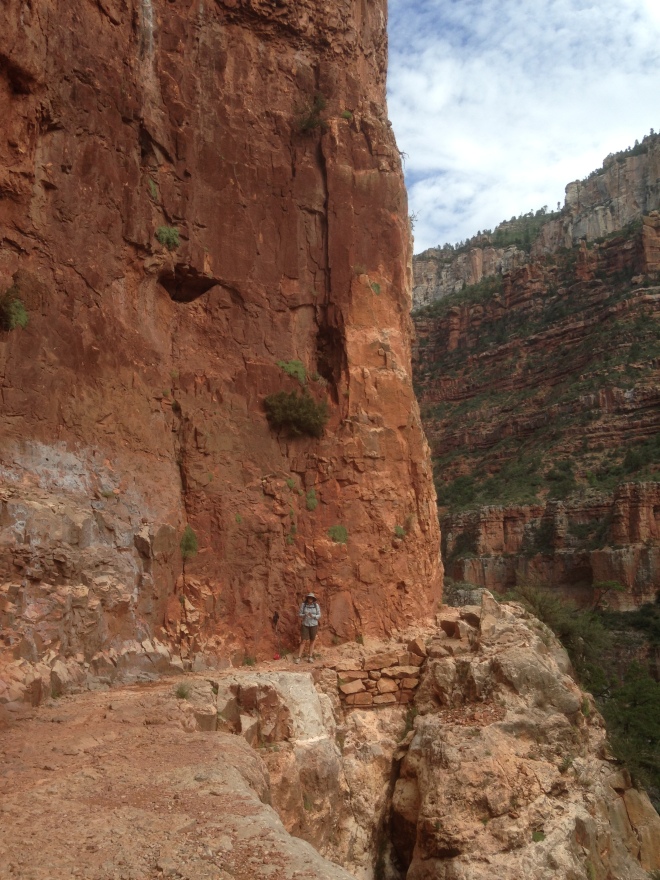 Dwarfed by the canyon walls. 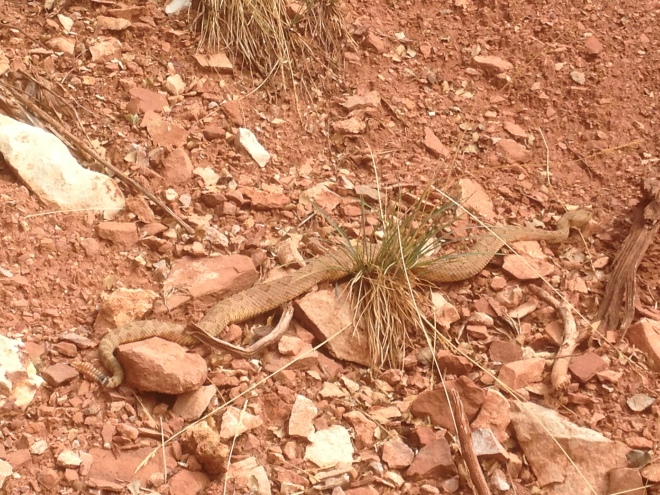 A Grand Canyon Rattlesnake!  This subspecies is found nowhere in the world but the Grand Canyon.  Some Grateful Dead looking hippie kid from Olympia, Washington pointed it out to us.  He was going uphill, we were going down.  He was watching it slither for 30 minutes.  He said it was the first rattlesnake he’d ever seen.  I told him they were a dime a dozen where we live.

Angels Window.  Can you see the Colorado River in the window?

On top of Angels Window.  That’s the Colorado River to the right of Amelia. 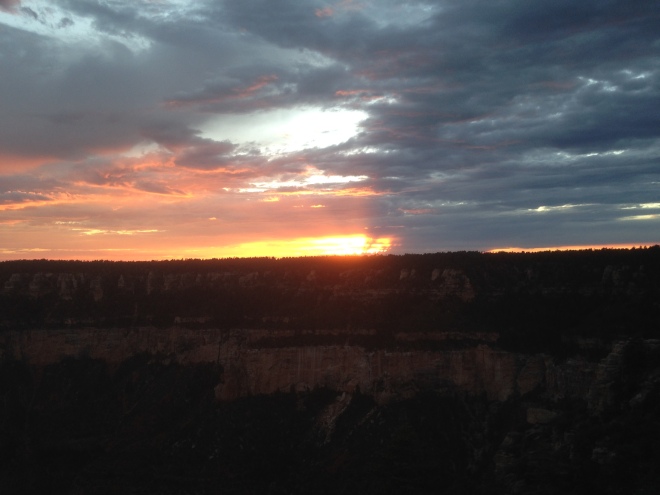