The post below originally was published on September 26, 2016. As we all know the Chargers left, and as an ultimate insult they moved to Los Angeles. That was the last straw for me. I have completely abandoned the NFL. The first season without watching the NFL was a little tough, but I’ve since not missed it one bit. I don’t even watch the Super Bowl. Screw the Spanos family. My friends and I were all planning to go to the last event at the stadium, a final farewell, but it was not to be, instead it is one more thing the pandemic has taken away of us.

The good news is they are building a new appropriate sized stadium on the same property for the San Diego State Aztecs.

Qualcomm stadium is a dump.  The Chargers might stay or leave, who knows?  But the stadium is most certainly a goner.  It’s hard to fathom it’s home to an NFL franchise.  It’s an embarrassing eye sore to America’s Finest City.  It’s unfortunate the Aztecs are stuck playing there.  It hasn’t always been a dump.  The steep downward trajectory seemed to begin when the Padres moved into Petco Park in 2004.  Petco is beautiful, new, clean, and full of modern conveniences.  The stadium is ugly, old, dirty, and has no conveniences.  It has been in limbo for years.  It is neglected, unloved, and past the point of no return on all the deferred maintenance.  It will be strange to drive through Mission Valley and not see it.  Seeing the stadium always conjures up memories.  If the stadium is no longer there will the memories and tales diminish or grow taller?

San Diego Stadium opened in 1967 on 166 acres of city owned property.  It was built for less than 28 million dollars.  That was the heyday of the multi-purpose stadium movement, of course now each sport needs its own home.  In 1980, the name was officially changed to San Diego Jack Murphy Stadium, aka The Murph.  In 1997, the naming rights were sold to Qualcomm and the stadium became know as the Q.  That deal expires in 2017.  It would be fitting if Waste Management or EDCO acquired the naming rights the remaining years.

Amelia’s parents went to the very first Padres game at the stadium in 1969.  I’ve only been going to the stadium since 1974.  I’ve seen it all, Padres, Chargers, Aztecs, Holiday Bowls, KGB Sky Shows, and concerts.  Not to mention tailgating memories, wrestling friends on the asphalt, and jeering Dodger fans.  More stories than I can remember, and some that I can’t share.

In the mid 70s, a general admission ticket to the Pads was somewhere around two dollars. We’d wait until the 3rd inning, then sneak down to the field level seats.  Attendance was always sparse, except when Randy Jones pitched.  Then the stadium came to life, watching the lefty induce ground ball after ground ball on his way to another complete game victory in a mere 90 minutes.  This was also the era when the KGB Chicken was hatched.  And who remembers the Tuba Man?  Many times he would be better entertainment than the product on the field.

This is going to sound unbelievably crazy: in the early 80s they would let you bring your own booze into the Pads game.  It had to be in a plastic container or some dumb rule like that.  We would stop at 7-11, buy a couple 12 packs of Coors Light and a couple gallon jugs of water.  Pour out the water, right in the 7-11 parking lot, and fill the gallon jugs with beer. And then just stroll through the turnstiles.  For real, this is how it was!  Eventually someone came to their senses and figured out they could make a lot more money by squashing that policy.  But of course after years of being able to do it, everyone was upset with the policy change.  So naturally everyone would try to sneak beers in.  One ingenuous friend, who shall remain nameless, hollowed out a small boom box that we would use to smuggle in beers.  And for the most part the ushers would turn a blind eye, except for one guy that was coined the banjo player.  If you were in his section, good luck fooling him. The stands were full of characters.  And some of the vendors were outright kooky.  There was this one vendor who sold newspapers.  Once he sold out his supply he would take a victory lap around the stadium with arms up in the air.  Everyone would give him a standing ovation.  This would happen every game!  It was the game.

Then in 1984, all hell broke loose.  The town was electric, finally a winner.   The Pads beat the Cubs and were going to the World Series.   Words can’t truly describe that year.  We lost to the Tigers, but what a year.

14 long years later, we had the ’98 team and another World Series trip.  Amelia and I were lucky enough to attend every home playoff game and the one World Series game at the stadium.  Without a doubt, our best team ever to date.  Tony Gwynn, Trevor Hoffman, Caminiti, Finley, Carlos Hernandez, Leyritz, Greg Vaughn, Flannery, Wally Joyner, Quilvio Veras, Chris Gomez, and Kevin Brown to name a few.  And the future hall of famer, Bruce Bochy, was the manager.  It was an incredible high.  The town was in love with the team. The NY Yankees swept us.  And celebrated on our field.  But the most amazing thing I’ve ever seen happened.  As the Padres were leaving the field they received a standing ovation, as if they had won. The players could hardly believe it.  They were showered with love.  It was an emotionally charged moment that practically brings me to tears recalling it.

It was reminiscent of January 15, 1995, after the AFC Championship game, Chargers beat Pittsburgh in Pittsburgh, we were going to the Super Bowl!  A huge spontaneous welcome home party was held at The Murph late that night.  They opened up the stadium and 70,000 showed up.  Interstate 15 was a parking lot.  People were parking on the side of the road and walking to the stadium.  Seating was a free for all, but my buddy was working at the Union-Tribune and had an employee ID card.  So we got into the press box and sat there.  It was one big cheering love fest.  When Seau took the stage, with his family, the place went bonkers.  He gave a great speech.

I just laugh when all the pundits say SD is not a sports town.  They point to all the fans from the other teams in the stands.  Of course, there are a lot of fans from the other teams, this is San Diego, who doesn’t want to visit?  Why not take a mini vacation to San Diego and see your team play.  And you have all the transplants, still clinging to their old hometown teams.  Trust me, San Diego has great fans, especially when you give them something to cheer about.

A funky thing about the multi-purpose stadiums is in the fall when baseball is still being played and football begins, the dirt infield stays, so they play football with a big dirt patch on the field.  This was the case on September 10, 1978.  The infamous date of the Holy Roller game against the hated Raiders.  I was in the stands that day.  It was brutal.  I have a bad track record with Chargers games.  I also witnessed a couple of depressing playoff losses.  The Marlon McCree fumble in 2007 and Nate Kaeding’s choke job, missing three field goals in 2010.

One of the most memorable Chargers game I attended had nothing to do with the actual game.  I couldn’t even tell you who we played or if we won.  Of course we were drinking, and we were watching the cheerleaders with binoculars, instead of the game.  I’m sure we were all saying stuff.  But our friend’s wife,  who’s a well known hot head, and whose head gets even hotter when she’s drinking, overheard her husband say something like “I would hold anyone of their hands” (that’s the PG version since this is a PG blog).  Somehow she held it together until after the game, as they were at the bottom of the escalator, bam!  She sucker punched him.  A bullseye, an instantaneous bloody nose.  Guess what?  They aren’t married anymore.

The Marshall Faulk SDSU years were really fun.  And the current Aztecs are exciting. Donnel Pumphrey is the real deal.  A Heisman Trophy candidate.  Unfortunately the SDSU Aztecs are stuck with Qualcomm Stadium as their home.  45,000 attendance in a stadium that holds 70,000 equals a bad atmosphere.  Too bad, the Aztecs deserve better.

It seemed like the Beach Boys played the stadium a million times.  I was at either the first or second Rolling Stones Farewell Tour.  Now here we are in 2016, some twenty plus years later, and The Stones are playing yet another final farewell tour.  Guns and Roses just played the Q last month.  No, I was not there, not even a free ticket would have brought me out.

The mother of all concerts, especially for a 19 year old was on August 5, 1979.  The line up was Shakin Street, UFO, Pat Travers, Blue Oyster Cult, and Cheap Trick.  Before the show even began we felt like pieces of burnt toast after spending the night on the banks of the San Diego River like the homeless, so we could be one of the first to enter.  My recollection of the day is spotty.  I do remember there was an incident with some Birkenstock sandals.  And the bass of Blue Oyster Cult is still rattling my cerebellum.

It’s going to be strange when they tear down the stadium. 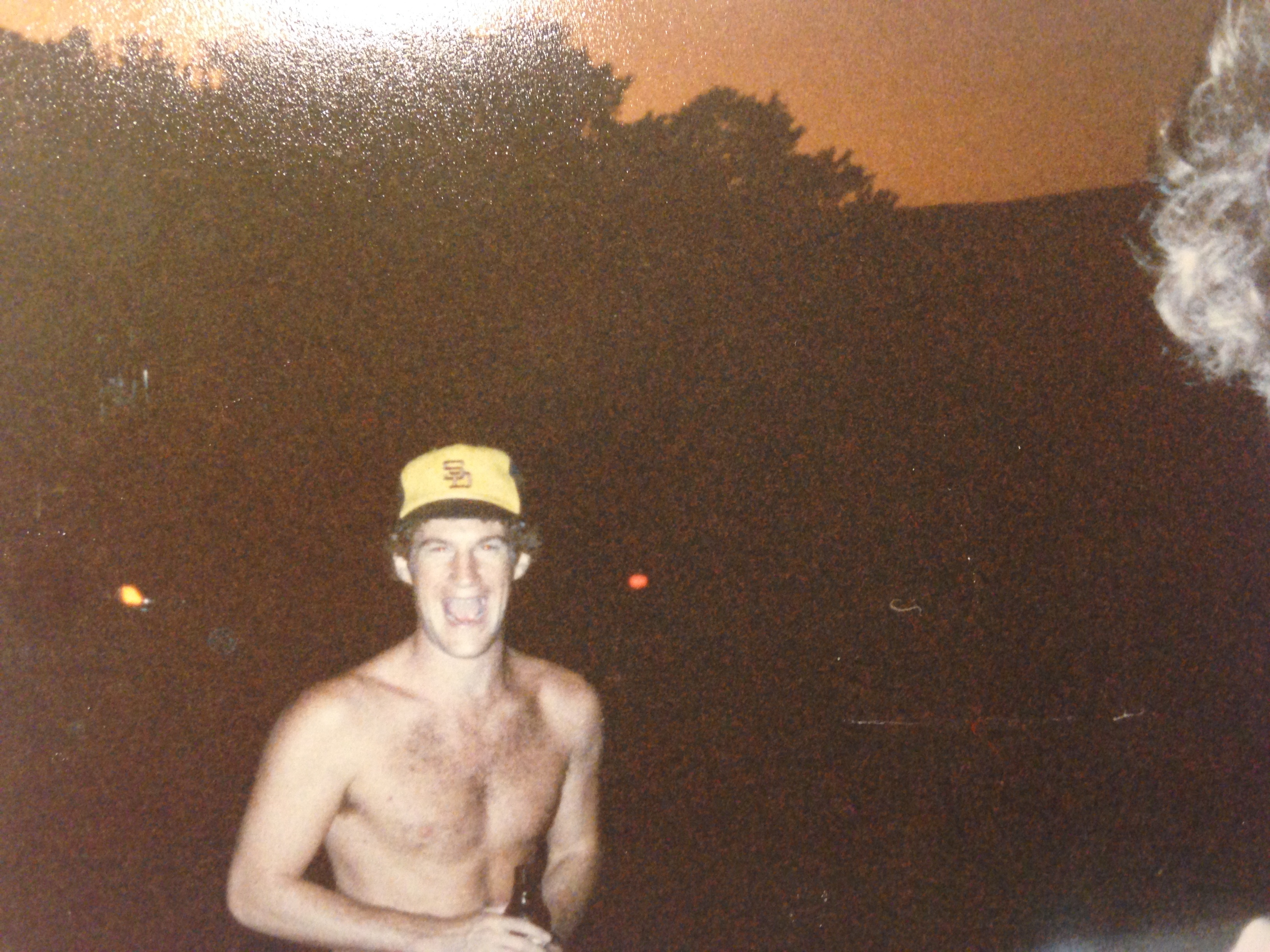 House, lit like a Christmas tree on our driveway in PQ. This was after the final NLCS game in ’84 when we beat the Cubs.  He was lucky enough to be there.  He drove all the way to our house honking his horn.  The entire town was complete bedlam. 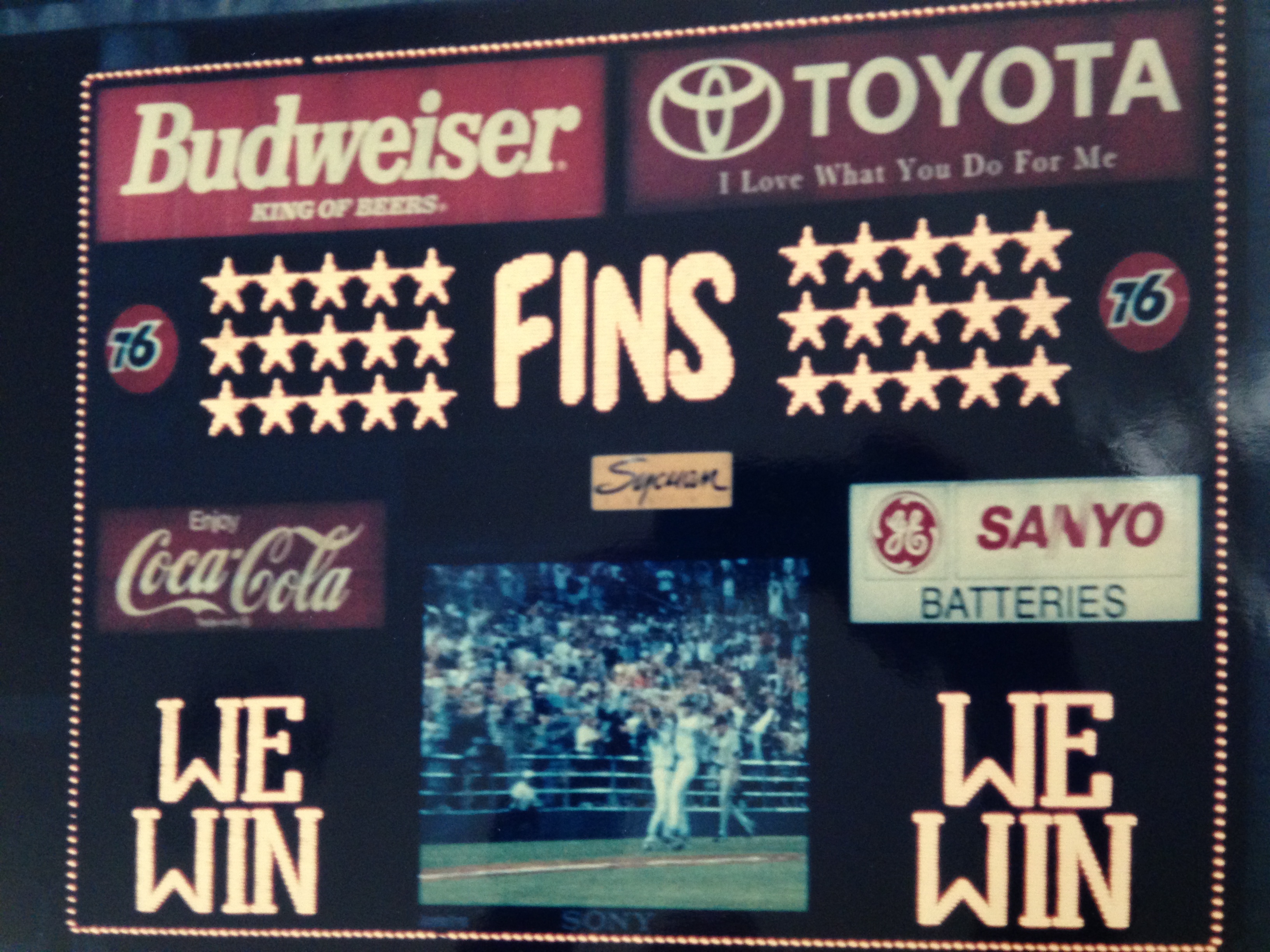 The late 90’s was a great time to own a restaurant named Fins!

Photos are more plentiful in this era because everyone has a smart phone.  I don’t have too many pics of all the time spent at the stadium.  This next set is from the ’98 World Series Game.

Pre marriage, unfortunately I don’t have the red vuarnets anymore, but I still wear that Hawaiin shirt!

Donna and Amelia, pals since kindergarten.

Fast forward to a couple of weeks ago at the SDSU Cal game with Bill and Marianne. Aztecs won!