This is my mom’s “last” big trip, or so she tells me.  (I thought Cuba was the “last” big trip?)  She wanted to go to West Virginia one last time and to North Carolina for a family reunion.  So off we went, while Amelia and Sara held down the fort.

In March of 1957, at 24 years of age, my mom fled West Virginia.  She jumped on a plane, for the first time in her life, and flew to California, where she’s lived ever since (except for a three year stint in Idaho from 1971-1974 and quick detour to Bay City, Texas in 1980).  Her first thought in California was, my god I can see forever.  It was nothing like the hollers of West Virginia.  She moved in with her brother and his family in Winters.  Nurses are always in high demand so she quickly got a job at Yolo General in Woodland, and then four months later Sacramento County Hospital.  She bought an orange Mercury convertible with a black top, and according to her, she was the cat’s meow.   I count my blessings everyday that my mom moved to California.  The downside, I never really knew my grandparents.  They were in West Virginia, then Florida, and eventually Texas where they both passed away.  I only saw them about five times throughout the years.  Amelia is lucky.  She grew up across the street from her grandparents.  They practically raised her.

My mother grew up in West Virginia, but spent most summers in North Carolina visiting all her cousins.  The reunion was held at Ashe Baptist Summer Camp just outside of West Jefferson, which of course is just down the road from Jefferson!   We were told to BYOB, so naturally I picked up some beer , 4/16oz pack of Appalachian Mountain Brewery Long Leaf IPA, for myself and a couple of waters for us.  When we arrived, most folks were already there and it took me about 30 seconds to figure out no one was drinking alcohol.  That was almost a faux pas!  So I stealthly put the 4 pack back into the car.  That would’ve been something, the odd duck from California drinking beer as they all were pounding soda pops and sweet tea.  These are true Southern Baptist folk.

My mom’s mother’s maiden name was Yates, her sister married a Barker.  So this is my great aunt’s people.

Gravel road up to the reunion. 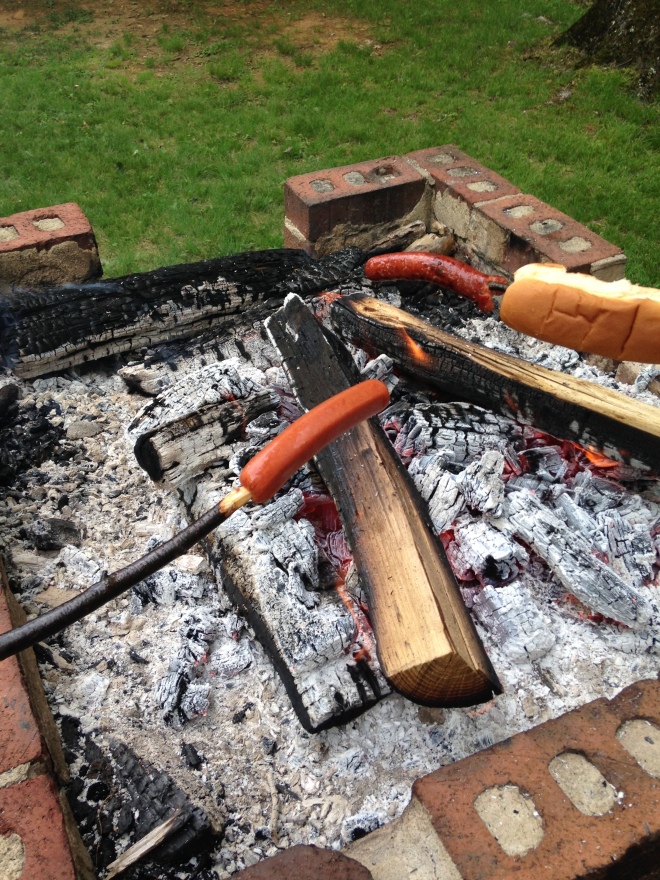 The reunion invite wasn’t kidding when they said weenie roast the first evening.

Nor were they kidding about the Rook tournament.  Sonny boy and I almost won it. 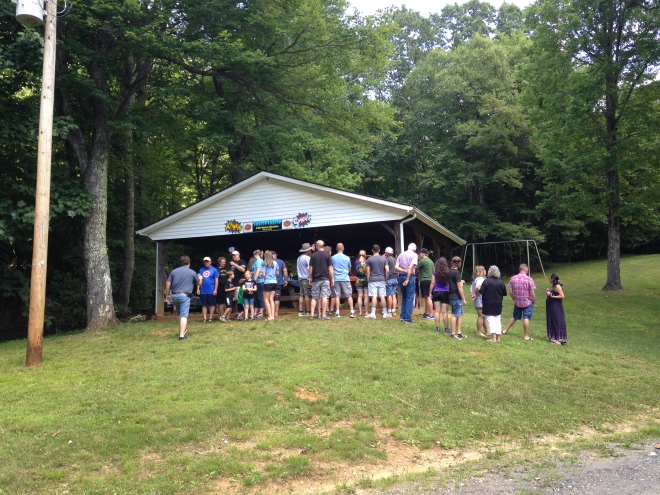 I guess these are my kin?  Cousins, once, twice, three and even four times removed and their families. I only met one person before, Polly. 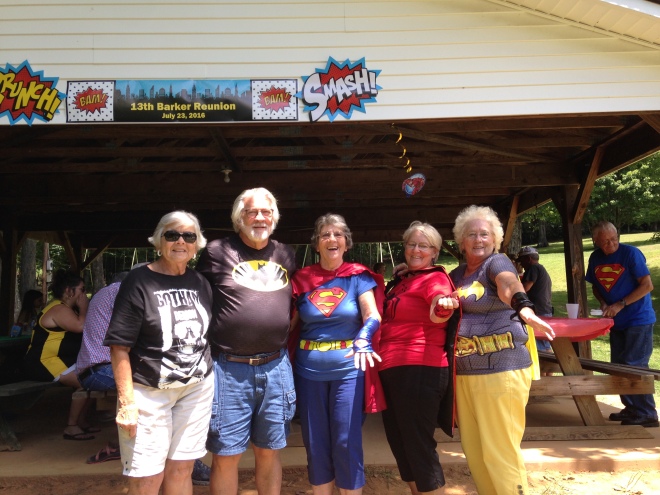 My mom’s first cousins. L to R, My mom, Sonny boy, Florence Ella, Jane, and Polly. In case you didn’t figure it out, the theme for the second day picnic was super heroes.

I’m a big rooster guy!  West Jefferson is a hip little touristy town.  They have all the cool things like a brewery, art shops, antique stores, and a coffee shop with cold brew on nitro! 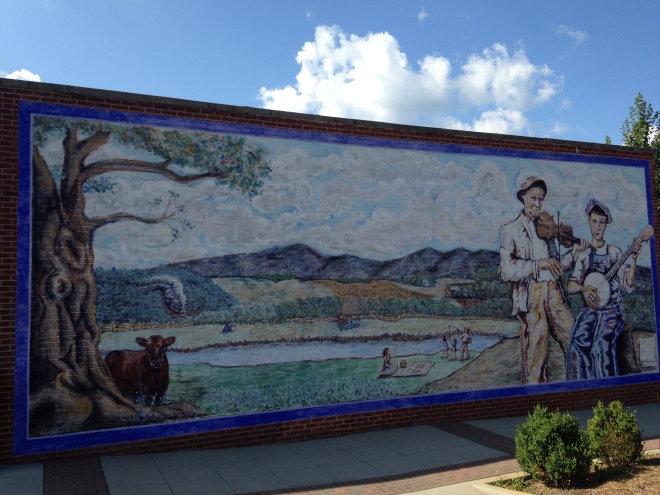 There are many murals on the bulidings in West Jefferson. 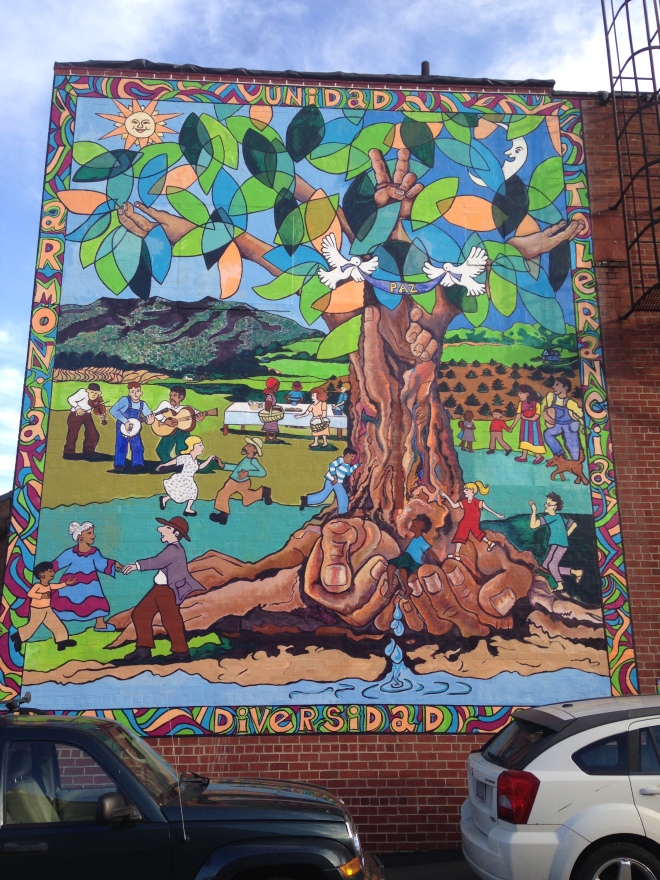 This was my favorite because of the Spanish! 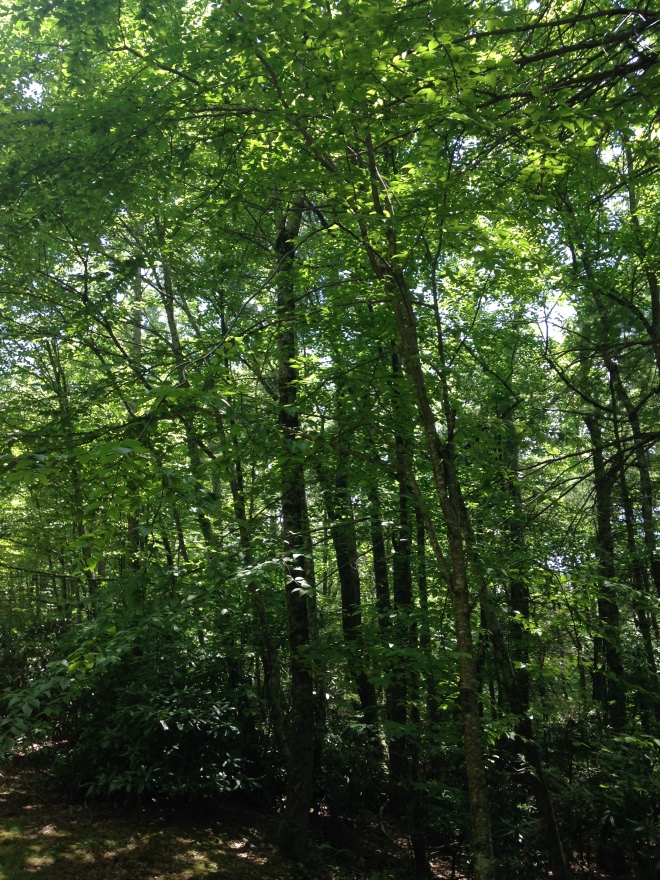 All in all it was beautiful country, but a bit claustrophobic.

If you ever find yourself in this part of North Carolina be sure to tune into WSGE-FM 91.7.  What a great independent radio station!