Our good friends, Doug and Tracee, have a beautiful second home here in Mammoth Lakes. From their back deck you can see two peaks. Depending on the topo map, both are either unnamed or the tall one is Pyramid Peak.  Most locals call it Pyramid.  Doug decided to name them Doug’s and Tracee’s Peaks. For three years we’ve been talking about climbing Doug’s. Talk is cheap and watermelon is sweet, so today was the day for us to butter that biscuit.

This wasn’t going to be an easy Duck Lake or Mammoth Crest hike. This was going to be a no trail, scramble straight up scree fields, and bouldering hike. It took Doug, Amelia, and myself over four hours to go five miles. If this were twenty years ago, we probably would’ve had ourselves in harm’s way. The dark clouds were quickly developing and we had only reached Tracee’s Peak. But now that we are older and wiser, we made the correct decision to abort the mission. We got down safe and sound, but it did hail and rain on us, and 20 minutes from the parking lot the thunder began. Doug’s will have to be for another day.

Enjoy the beautiful pictures. The Eastern Sierras are spectacular.

Amelia and Doug at the start. Cool mottled sunlight. 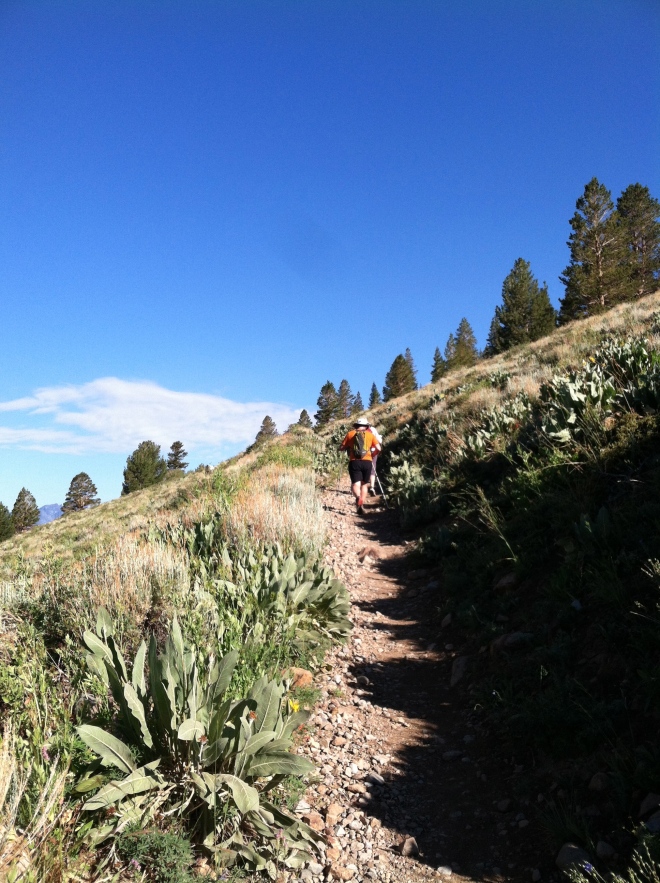 We took the Heart Lake Trail for about 20 minutes, then hit the scree field.

We were all pleasantly surprised at the amount of flowers. Here’s your Western Blue Flax.

Mule Ears. In an emergency you can use the leaves to wipe.

Your blogger, hiking in a Hawaiian shirt! This was the first of many scree fields we crossed.

That’s Amelia, way down there.

And there’s Doug, with Lake Mary, Mammoth Mountain on the right, and Banner, Ritter, and the Minarets. 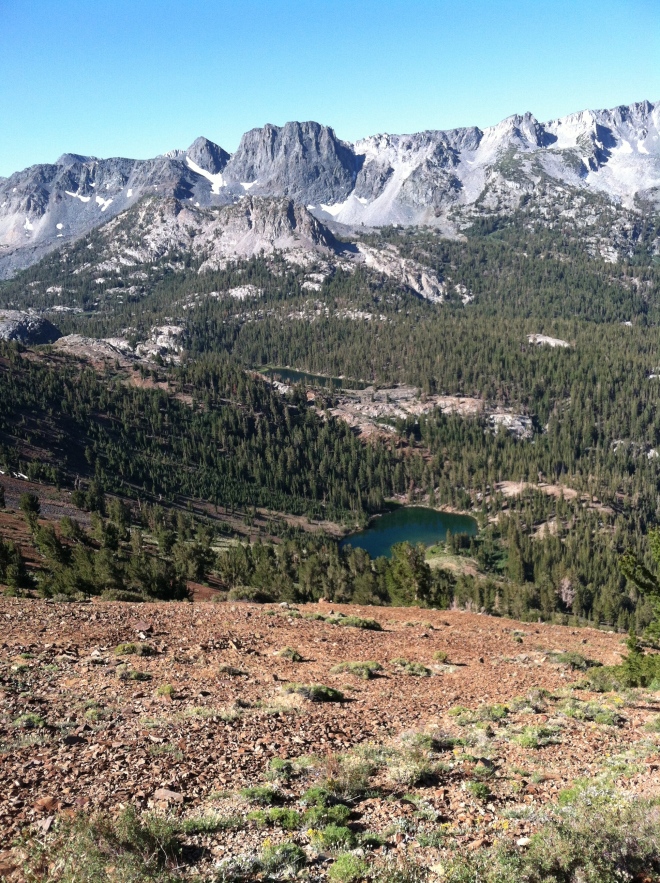 We went way beyond this peak.

Then down into yet another scree field.

Then we picked up this faint trail. Those two specks in the middle are Doug and Amelia.

Doug and Doug’s. One day we’ll get to the top of that bad boy. Btw, it’s not as close as it looks, that’s at least 90 more minutes of serious scrambling.

Time to descend, the clouds were forming quickly.

For the second time, our old age kept us out of harm’s way. On the descent we started going viewer’s right of this peak, and quickly realized it was too step, so we turned around and went the same way we ascended, to the left. This is the peak we went way beyond. All weather reports were calling for no thunder until 4pm. This was about noon.

As you can see it was really getting dark. Lake Mary looks totally different. 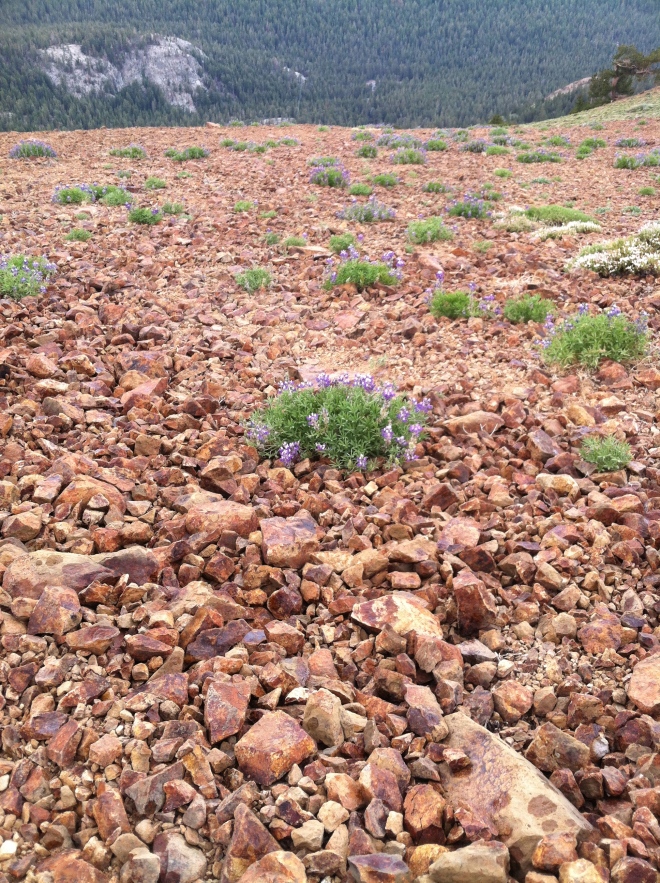 Nice shot of the high alpine lupine. The pic also gives you a good perspective of how far above tree line we were. Look closely and you can see the raindrops on the rocks. 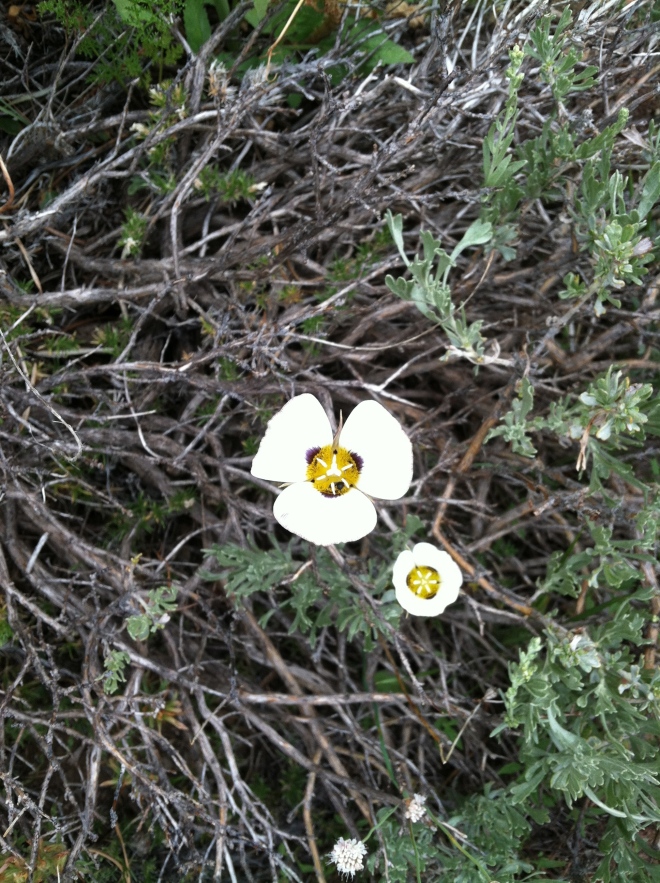 Back on Heart Lake Trail. And the thunder began. 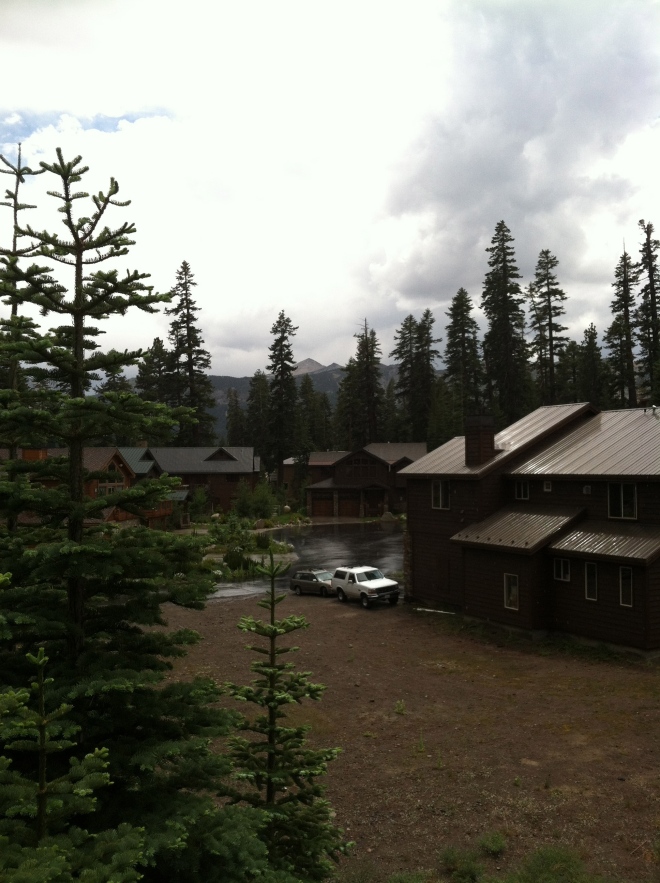 The view from Doug and Tracee’s deck after the hike. The taller peak on the left is Doug’s. The smaller peak is Tracee.

Here’s the zoomed in view of Doug and Tracee.