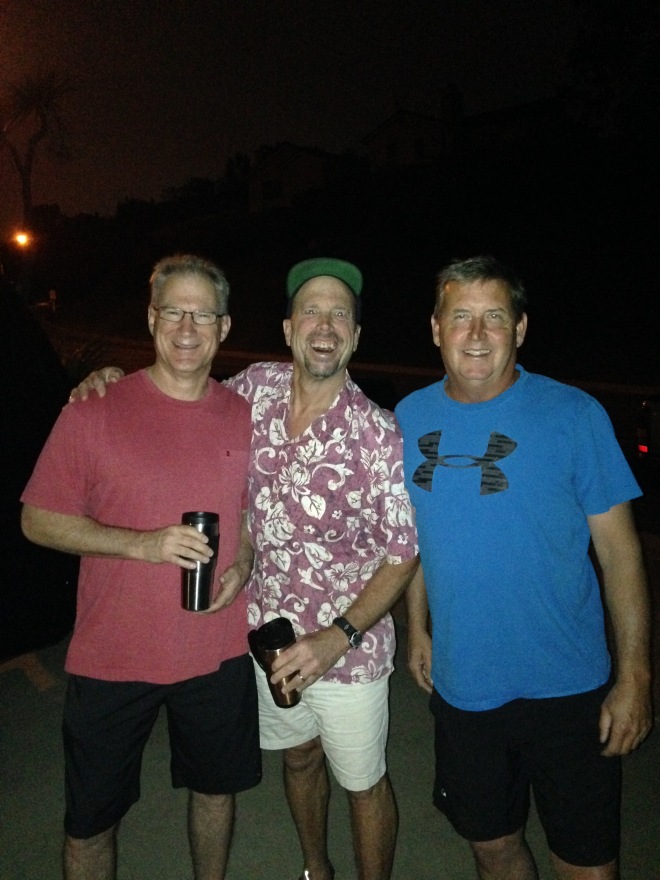 40 years of friendship. House, Harris, and Acomb. 5am, coffee in hand, leaving for Mexico.

This was not an Airstream trip, nor do I ever envision taking the Airstream south of the border, instead it was a boys yellowtail fishing trip put on by Pat’s brother, Bill.  It was quite odd to not have to do any planning, just show up, and ride in the back seat.  We didn’t even need to bring money.  Bill was going to pay for everything and we would just cut him a check when we got back.

Bahia de los Angeles, or LA Bay as the gringos call it, is over 400 miles from San Diego on the Sea of Cortez.  There are more remote places in Baja, but LA Bay is probably the most remote reachable by pavement.  It’s a long beautiful (as long as you look past all the trash on the side of the road) drive.  But going through all the towns can be a drag, especially the large towns of Ensenada and San Quintin.  They are quite congested with traffic.  It was also sad to see so many stray dogs.  They were all mutts, neglected, and wandering the streets.  Even sadder was seeing the dead dogs that had been ran over on the road.  It was just heart breaking.  We breezed through all the check points, two military and one federale, both directions, no problem.  It’s strange seeing what look like teenagers holding machine guns.

LA Bay has changed a lot since the last time I was there in ’97.  Back then there was no electricity, everything was ran on a generator.  And the generator was turned off at 10pm!  It was really just a fishing village.  In 2007, electrical power lines were brought into LA Bay.  The town is larger now, but still small, with an approximate population of 800.  Fishing is still king, but they are also doing eco tours.

House and I got a real kick out of listening to the Acomb brothers bicker and banter.  We never spent much time with Bill growing up because he is six years older.  The bantering was mostly good-natured fun, but it was also a little window into their brother-brother relationship.  It made me miss my brother, yet it still put a big smile on my face.

The only real stress was being sure you had your morning constitutional, if not you’d be squatting over a five gallon bucket, out in the open on the panga, with everyone laughing at you.  So there we were, four old guys, all getting up at least an hour before departure, walking around thinking positive and hoping it would happen.  The anxiety of getting it done only made matters worse.  On the second day of fishing, we were all at the boatyard, getting ready to load up, and Bill got all wide eyed, jumped in the truck and said, “I have to go!”  So he hauled ass back to the motel room and went.  That’s the closest we came to using the five gallon bucket. 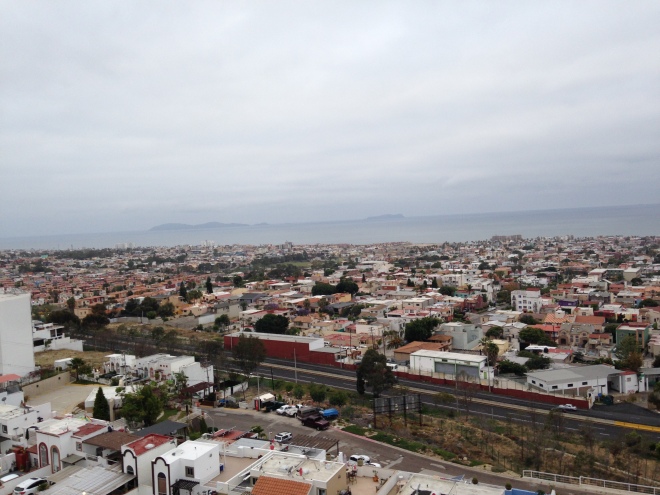 Not LA Bay.  This is the view from the apartment Bill keeps in Playas de Tijuana.  It was our first stop to pick up supplies.  We never got the “real” story about the apartment.

The view point of LA Bay where everyone stops for a customary cerveza before arriving to town.

Raquel and Larry’s hotel.  We were the only ones here.  Ruth is now the proprietor.  Raquel was killed in an ambush on Mexico 1 highway in ’06 and Larry recently died from lung cancer.  The upstairs rooms are unusable because the deck is ready to collapse. 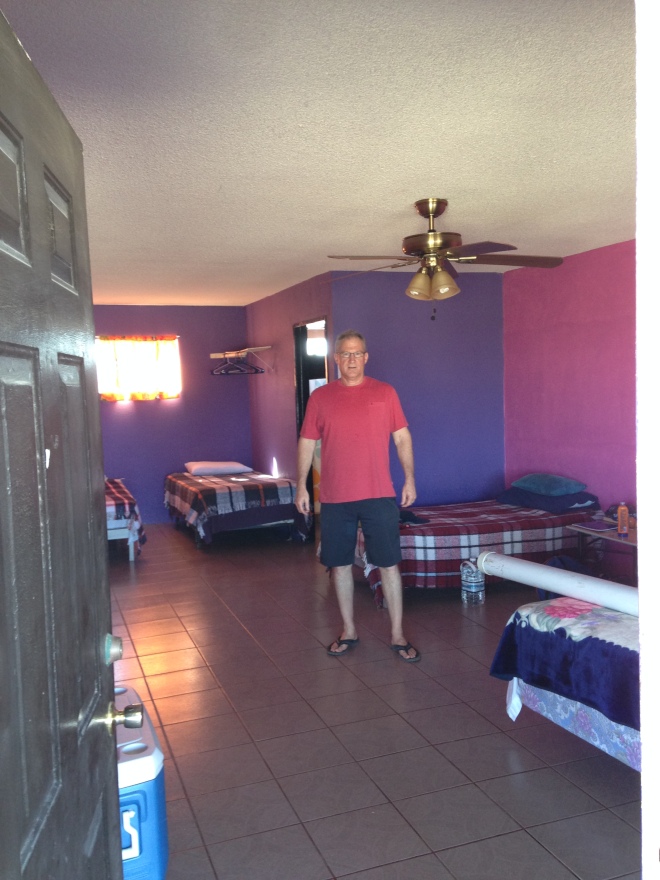 House and Acomb, taking in the beauty.  Our hotel was right on the water. 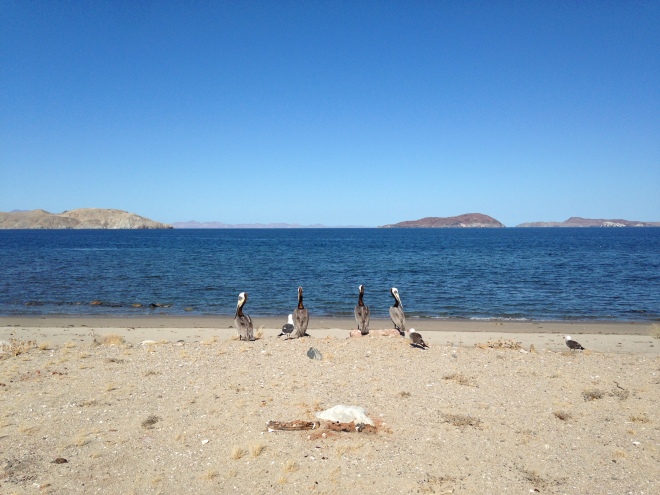 Even the Brown Pelicans like the view at Raquel and Larry’s. 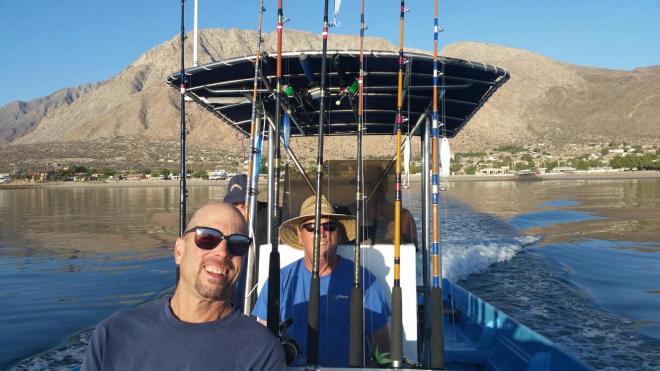 Heading out the first morning in the panga, LA Bay in the background.

One of the landmarks. 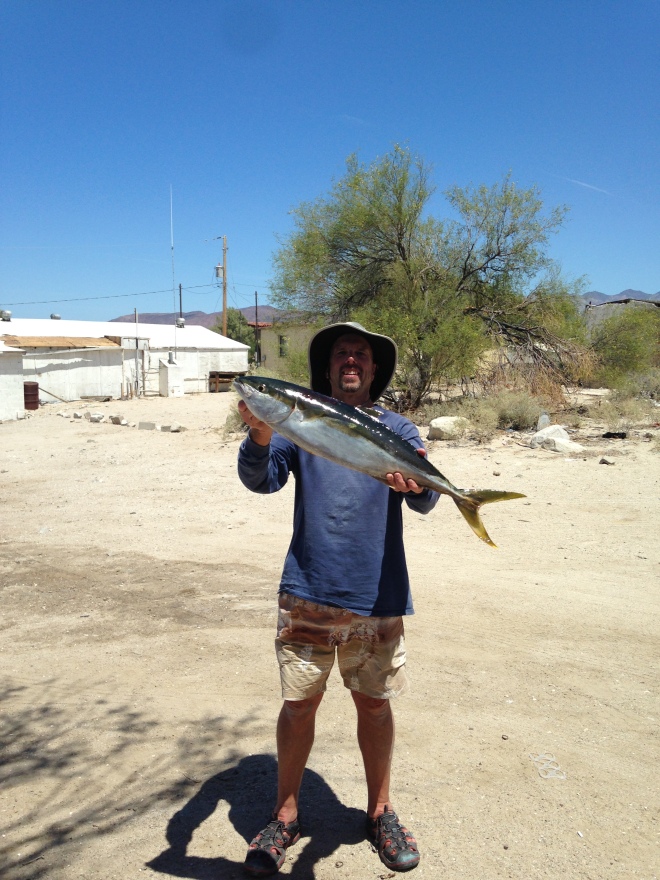 The yellowtail are fun to catch!

Here’s our skipper, Jose.  He also cleans the fish.  63 years old and has lived in Bahia de los Angeles his entire life.

A Brown Pelican and seagulls, patiently waiting on the roof of the fish cleaning area.

House grinning at what he thought was the jackpot fish he caught.

Then the next day Acomb caught this monster jackpot fish.

LA Bay now has a fancy sails artwork piece in the middle of town.

View from the patio of what we thought was the best restaurant in town, Guillermo’s.

All over town, whale bones are used as landscape pieces.

Ruth’s dog Lexus, with House.  She’s a wonderful, not neglected three year old mix.  One afternoon while everyone was napping I watched her chase a coyote off the property.

The guys kicking back enjoying the evening view.

And what a view it was, especially with the nearly full moon.

Then there was the night we got stuck…

We didn’t hurt ourselves, didn’t get into trouble, and caught a lot of fish.  The two day boat total was 15 Yellowtail, at least that many Cabrilla (seabass), 2 Ling Cod, a Halibut, a Red Snapper, and a few Chilipepper rockfish.  We each came home with around 25 pounds of filleted fish.  Too bad it’s always such a buzzkill, time sink, traffic nightmare crossing the border back into the USA.

Blue skies, bees, and blooms. I’ve lost track of how many flowers. Our San Pedro cactus is twelve years old and ten feet high.
Eleven more bloomed last night. The first eight are now beginning to fade. It’s going to be a multi-day event.
Loving the San Pedro Cactus flowers and so are the bees! The first eight bloomed last night. At least twenty more coming.
Stay tuned! Our San Pedro cactus is getting ready to go off. There’s more than thirty buds. It’s going to be a historic bloom.
Crazy ass weather today!
Coyote Bush.